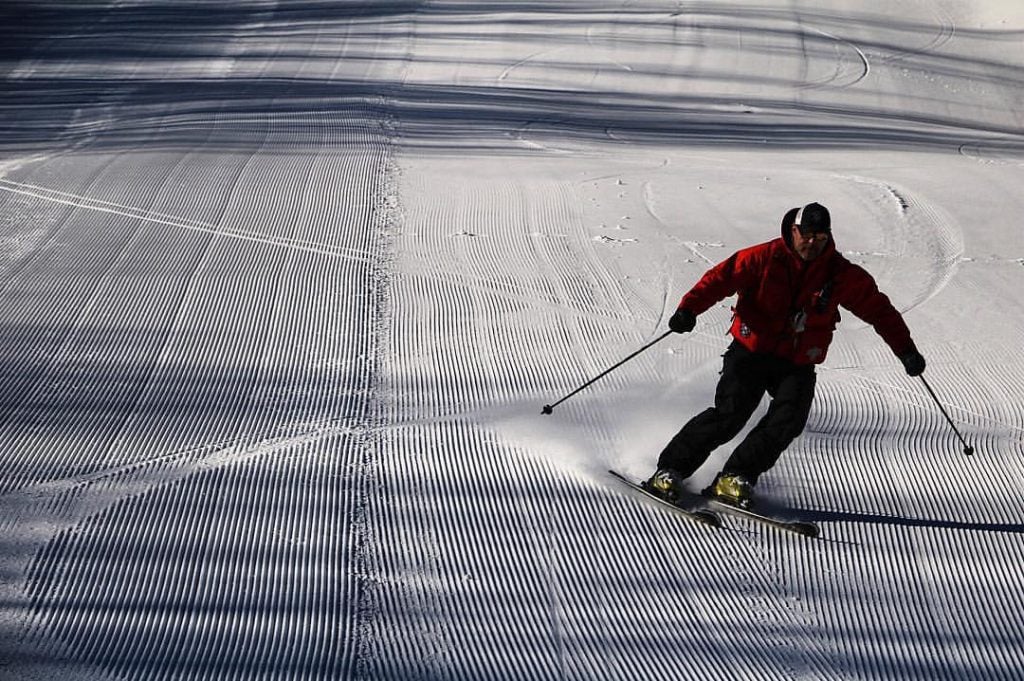 After a wintry week filled with cold and snow, the weekend is finally almost here!  All you weekend warriors can finally hit the slopes after having to look at the snow all week.  We’ll have eleven open ski areas open this weekend, so there is plenty of terrain to ski and snowboard.  Unfortunately, it does look like we’ll have a little rain to start the weekend, but it is March so it’s not unexpected.

Temperatures this morning are much warmer than recent mornings.  Warmer is relative as the past few days have been brutal with lots of single digits and teens and absolutely frigid wind chills.  For some perspective on this cold snap, consider the fact that Snowshoe and Timberline haven’t been above freezing since Monday.  The two days prior to that were well below freezing.  That means that 5 of the past 6 days have stayed below freezing with over a foot of snow.  That would be impressive in January, let alone mid-March.

Most of the remaining open resorts in the region are sub-freezing this morning, but as has been the case for the past few weeks hardly anybody made snow.  A shout out to Snowshoe and Wisp as they are the only two ski areas to have done so.  That said, the snow from earlier this week is still prevalent and as we already went over, temperatures have remained cold enough to prevent melting.  Therefore, snowmaking hasn’t been as crucial as it normally is for this late in the season.  I saw some pictures from Beech yesterday and there was still a ton of snow off the trails in the woods and in the Village.  A lot of our webcams in the North Carolina High Country confirm that as they show snow capped mountains. 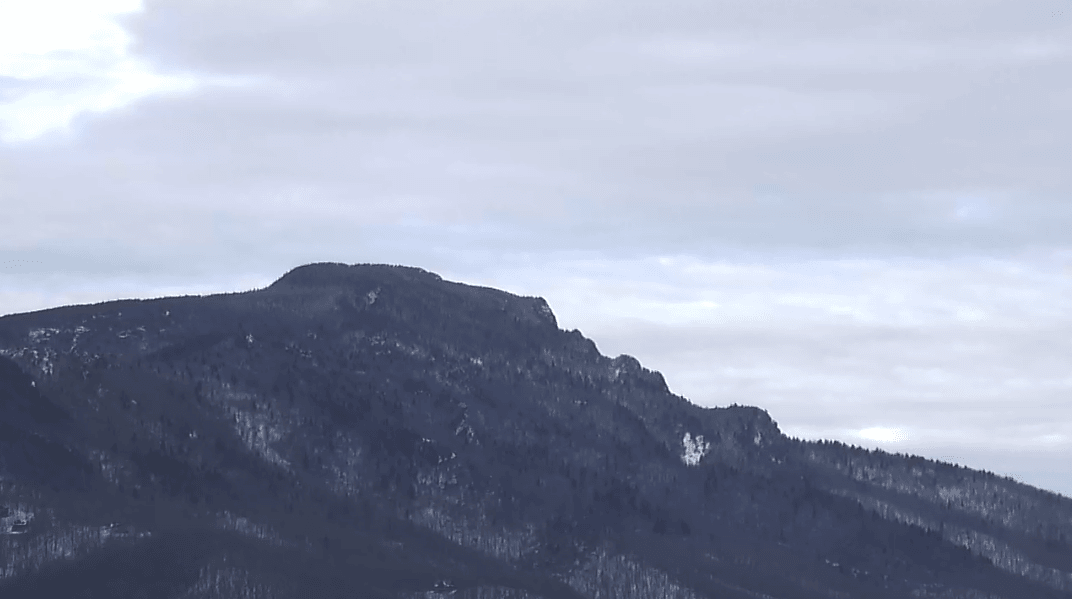 Unfortunately, some of the remaining natural snow is going to get washed away in the next 24 hours or so as some rain is in the forecast.  It should pick up this afternoon and last into tomorrow morning.  The further north you go in the region and the better chance you have of seeing it mix with some snow, but accumulations will be minimal at best.

Those same ski areas up in West Virginia and Wisp in Maryland do stand a better chance at seeing some snow Saturday night though.  A few inches of snow could greet visitors to Snowshoe, Timberline, and Wisp come Sunday morning.  It won’t be a lot but it would just be icing on the cake and a great way to end the week.  Nobody will be complaining about a little fluff on top of corduroy.  Here’s the current NWS snowfall forecast from now through Sunday.  A bit of this is actually from tonight.  I’ve circled the approximate locations of those three previously mentioned resorts. 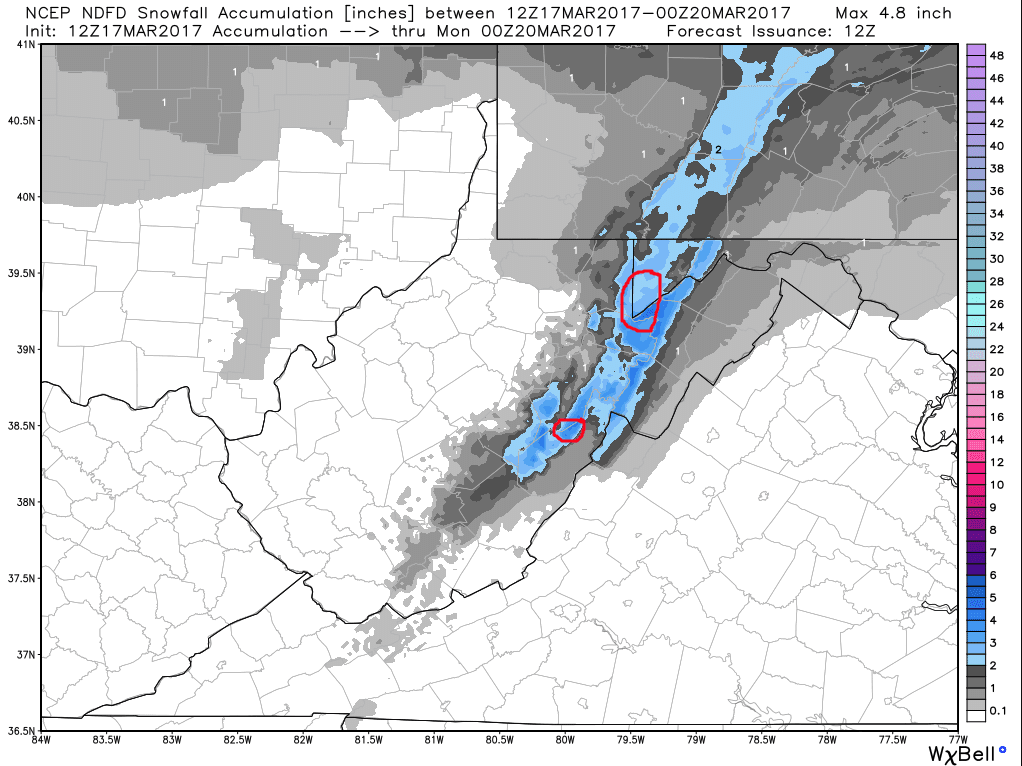 Sunday is definitely the best day of the weekend to get some turns in.  I would definitely be riding somewhere if possible, but my future in-laws are coming into town this weekend as we have some wedding planning to do.  PRIORITIES.  I will be looking at the webcams in envy on Sunday though as there is going to be some fantastic late season conditions to be had.  A few weeks ago, who would have thought that we’d have eleven open ski areas still?  Not me.  And all of them have great snow conditions.  Miracle March might be an overstatement, but it sure feels like it after the down year.

I don’t do this too often, but with late season operating hours in effect and some closures already occurring and more happening after Sunday, let’s take a look at who’s open this weekend and who will be next week.

Appalachian Ski Mountain: App is open on 9 of 12 trails and simply looks amazing.  Peak season conditions even.  They did make snow a few times this past week.  ASM is open daily but tomorrow night is the final night session of the season.  After that, it’s day sessions only through the 26th.  I’m already looking forward to park laps next weekend out there as they have been getting funky with some of their features.

Beech Mountain: Beech remains open to the top with 9 trails.  It’s day sessions only for them as the slopes are open from 9-5pm.  They haven’t made snow in a while but 7″ of snow in the past week has helped greatly.  They are opening tubing back up for the weekend, so if that’s your thing then head on up there.  Closing day is next Saturday, the 25th.

Cataloochee: The Cat is enjoying a late season renaissance after a tough year.  Recent snowmaking and 6″ of snow this week has helped them end the season on a high note.  Open to the top with 7 open slopes, good times can be had out there.  They’re open daily through the 26th for day sessions only.

Sugar Mountain: Rounding up NC, Sugar continues to offer stellar conditions as well.  Their high speed 6-pack lift is servicing 10 open slopes for day and night sessions. There’s no word on closing date yet, but next weekend is probably a good bet.  Unlike many other resorts, Sugar often offers night skiing and riding through closing day, so you might be able to get some night turns in next week.  Tubing is open with 3 lanes.

Snowshoe Mountain: The Shoe continues to be your best choice for skiing and snowboarding in the region.  They’re up to 51 open trails again today (practically the whole mountain!) thanks to the fact that Silver Creek is back open for today and tomorrow.  That means night skiing is available tonight and Saturday.  Their scheduled closing date is next Sunday.  They’ve made snow all week and have had 13″ of snow, so it’s looking GOOD out there.  Check out this video from a few days ago.  Looks so fun!

Just some fun in the powder brought to you by Winter Storm #Stella and #GoPro! #snowshoemtn #powdays #surfsup

Timberline: T-line is back open today on 18 slopes and day sessions only after being closed Monday-Thursday.  This is their final weekend of the season, so after Sunday they’ll be done.  It’s a good way to go out though as they’ve had over 14″ of natural snow this week and it’s all sitting there waiting on you to come ski it.  Check out this video from yesterday (maybe?).  Looks amazing.

Off The Wall is Stella

Three days later and it is still snowing in #CanaanValley.Timberline Four Seasons Resort and White Grass XC Ski Area are ready for a weekend visit from you!Nothing like jumping from one snow-wale to another on OTW!#GetTuckered #OffTheWall #DavisWV

Winterplace: With 23 trails open, Winterplace only trails Snowshoe for most open runs in the region right now.  They have consistently had 20+ runs open all year long.  Warren and the snowmakers have been killing it this year.  It’s day sessions only for them and tubing is open.  This might be the final weekend of the season for Winterplace, as they will be closed Monday-Friday of next week with the potential of re-opening next Saturday.

Bryce Resort: Bryce is still enjoying stellar conditions after the 9″ of snow they received earlier this week.  They’re open on 3 trails right now for day sessions only.  I have no idea if tubing is open or not, as their snow report says CLOSED but then right below it says there are 2 lanes open.  No word on a closing date yet.  I’m not even going to speculate as I’ve already been wrong twice about them.

Massanutten: Kenny Hess and the folks at the Nut are open each day through Sunday from 9am-5pm on 5 trails.  Tubing is open from 9am-10pm.  So ski all day, grab a beer or three, and then go tubing.  Sounds fun!  They haven’t definitively said if they’re ending the season on Sunday, but they also haven’t put out a schedule beyond then so this weekend could be it for them.

Wintergreen: As I mentioned yesterday, this weekend might be it for Wintergreen.  They’re open for day sessions only through Sunday on 11 open trails.  They MIGHT open for one final day next Saturday, but that’s no guarantee so get it while you for sure can this weekend.

Wisp Resort: And finally, Wisp re-opens tomorrow after being closed for the past few weeks.  That will be to the delight of many, especially season pass holders, as this was their shortest season ever.  They have been working feverishly all week long getting everything ready for the weekend and it sounds like they have some cool stuff planned.  They’ll be open from 9am-5pm Saturday and Sunday, with tubing and the Mountain Coaster also open.  For 29 bucks, you get an all access pass to ski or snowboard, tube, and ride the coaster.  Season pass holders get that for free!  They’ll also have some food and drinks.  A “Wisp Amber Ale” sounds delicious right now.

So a fun weekend lies ahead and there’s plenty of places for you to go.  Don’t let the rain at the beginning deter you too much.  Snow conditions are great right now and this is the next to last weekend of the season, so get it while you can!  It’s going to be a long and hot 8 months.

Previous Post
The Cold Continues with More Snow for a Few Lucky Ski Areas
Next Post
March Madness Indeed! The Weather Pattern at the Southeast’s Ski Resorts has Resembled January until today…