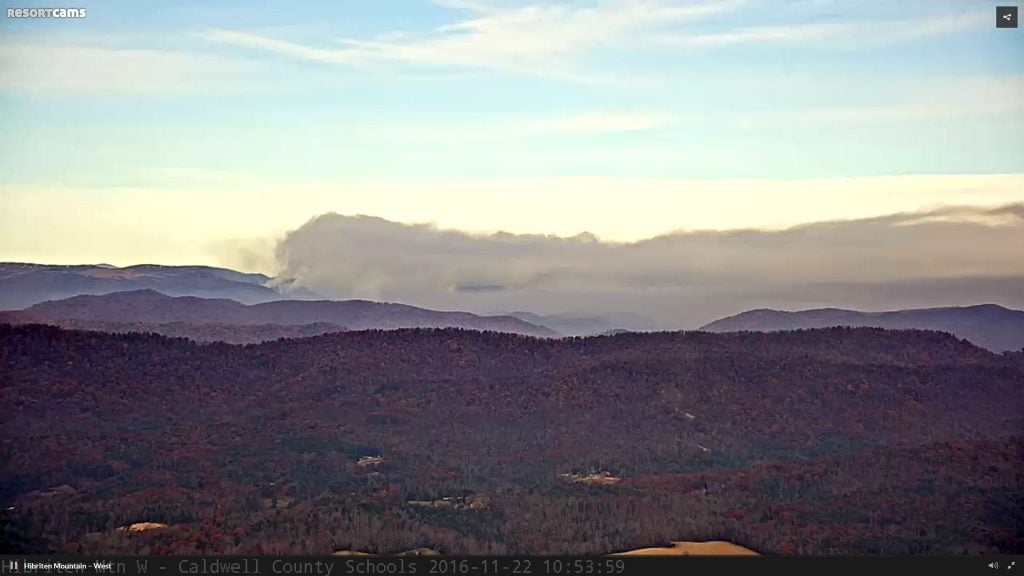 Appalachian Ski Mountain is open today and they immediately go to the top of the list in terms of the number of slopes and trails open with 7 of their 12 open for DAY and NIGHT sessions. They also are open with one terrain park. Knowing Brad and his team – they have some perfect corduroy awaiting first day skiers and snowboarders.

Cataloochee Ski Area added another trail and they have extended their open terrain to their 3/4 station now with 6 trails for day skiing. 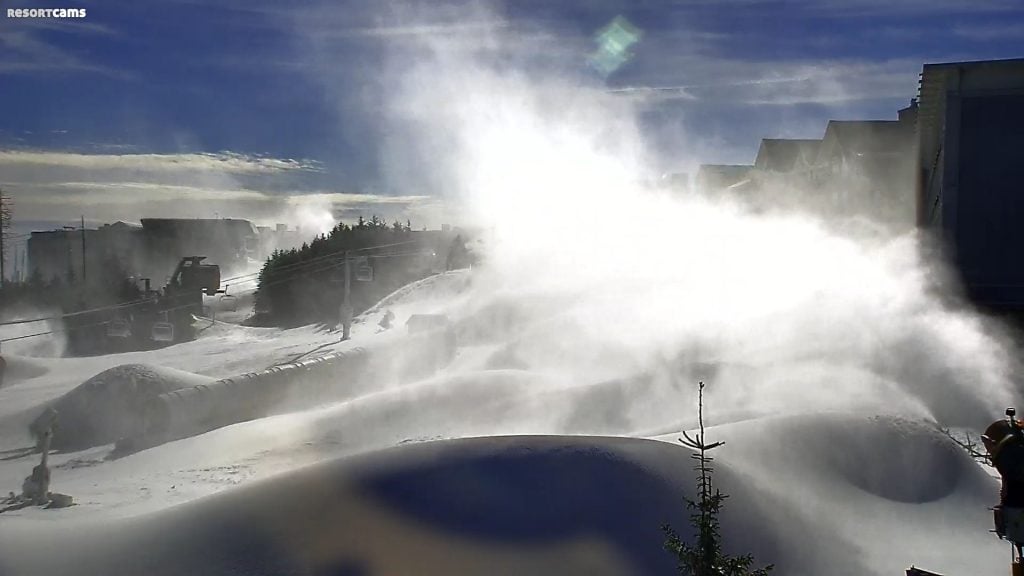 Snowshoe Mountain Resort is creating some “snow whales” atop their 4848′ elevations! Click to Enlarge!

The snowguns are off at most resorts with the exception of the West Virginia resorts (where all four were still making snow as of 9:30am). Interestingly, Wisp Resort in Maryland has not YET made any snow despite the fact that it has been PLENTY cold enough to over the last few days. (It is 23° there this morning.) The snow that you can see on the ground via the WISP RESORT LIVE CAM is from natural snow that fell this past weekend.

Wisp could be looking at the 10 day forecast where only ONE of the next ten days offer cold enough temps (27° on Saturday night) to make snow. Compare that forecast with the one for Snowshoe Mountain where FIVE of TEN days ahead look cold enough for snowmaking.

Here is another cool shot of the Snowmaking going on at Snowshoe from the Shavers Center cam as of 11am. 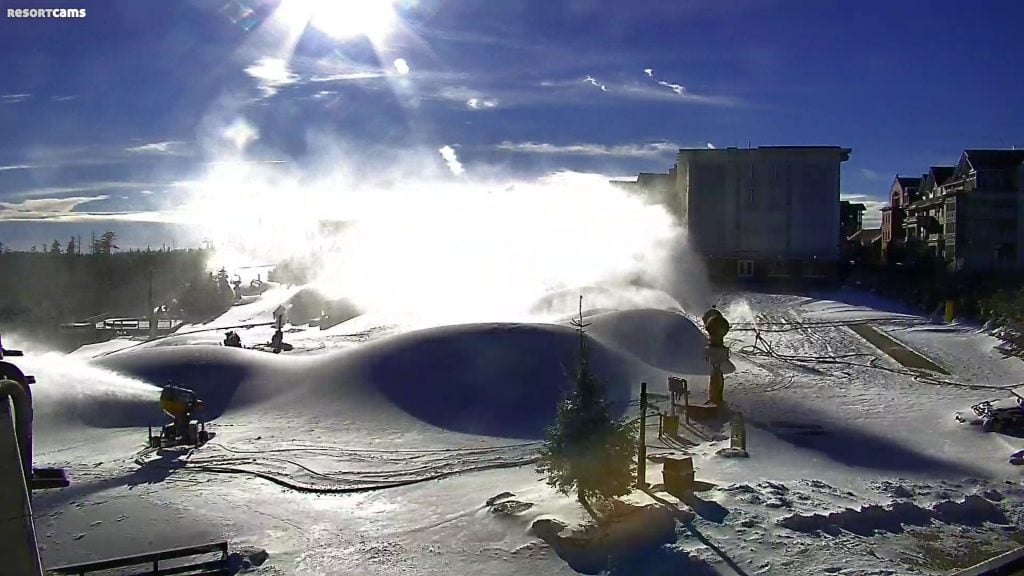 That’s a LOT of snow waiting to be groomed to perfection for Opening Day! Click to enlarge!

The fact is right now, we are in that normal “start up mode” where resorts will be watching the weather forecasts like a hawk to find ANY open windows of snowmaking opportunities to blast the slopes with manmade snow.  The good news is that most of our ski areas should see four to five of those “windows” over the next ten days and as great as our snowmaking teams are, that should be enough to maintain and grow the bases and slopes over that period.

All Eyes Are On the Weather Going Into December

You probably get the drift. Everyone’s watching the news about water shortages, restrictions, the fires and how this might affect snowmaking and the ski resorts. Normally, this time of year all we have to concern ourselves with are cold temperatures – cold enough to make snow. Natural snowfall is always awesome and usually by this date on the calendar nearly every ski area community would have seen a fair amount of it.

Case in point – during the 2014-2015 season by THIS DATE (Nov 22nd) we had already seen 13.5″ of natural snow atop Beech Mountain Resort. Advance forward to this season to date and NONE of the ski areas outside of West Virginia and Maryland have seen ANY measurable snowfall to date. In other words, Beech, Sugar, App, Cataloochee and Wolf Ridge…as well as Ober in Tennessee and all of the Virginia ski resorts have seen NO SNOW.

I mentioned the West Virginia and Maryland resorts and SNOW – because they actually HAD significant snowfall over the LAST 72 HOURS. We were so preoccupied with OPENING DAY NEWS and coverage of the drought and wildfires that we failed to report the fact that Snowshoe Mountain Resort in West Virginia saw 5″ of new, natural snow – taking them to 6″ on the season to date.

Wisp Resort saw about 1.5″ of snow and some of that can be seen on the LIVE CAM at http://www.resortcams.com/webcams/wisp/

Winterplace Resort saw about 3″ of snow over the weekend with slightly more or less being reported close-by.

THE BIG WINNER from the weekend snowstorm was Canaan Valley and Timberline in West Virginia which saw 6.3″ of snow on Sunday and another 4.4″ overnight and as of Monday morning for a storm total of 10.7″ of snow and 11.3″ on the season.

Snow totals can always been seen via our SNOW REPORT as we keep up with ALL of that kind of data all season long. So when you want to know WHERE THE SNOW IS…we’ve got you covered.

Obviously we are not Nostradamus so we can’t possibly predict the future. What we CAN do is report what most of the industry experts are saying. Right NOW we’re in probably THE DRIEST period that I’ve seen in my time in the mountains. It’s very, very dry. There hasn’t been any appreciable rainfall in the last two months. That and the brisk-to-heavy winds that we’ve been experiencing have led to way too many wildfires dotting the mountains of the Southeast. 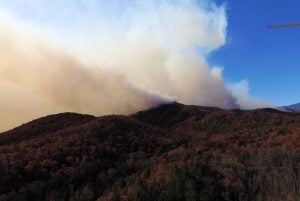 The Buck Creek Fire near Marion, NC as of 1pm Monday. Click to Enlarge!

I personally witnessed the Buck Creek wildfire near Marion, NC late on Monday and captured a bit of drone video that you can see on the front page of www.HighCountryWeather.com.

I shot that image via our drone.

This morning – the BIG NEWS is that there is a new wildfire in the Blowing Rock and Boone area and firefighters are going door to door telling people to evacuate. Ashe County has been fighting a wildfire for days now.

The BLOWING ROCK FIRE can be seen from the new webcam atop Hibriten Mountain in Lenoir. Check it out: http://www.resortcams.com/webcams/hibriten-mountain-west/

Watch that camera pan from left to right until it hits the Blowing Rock wildfire! That’s NUTS!

NOBODY WANTS RAIN IN THE WINTER…BUT…

As early as it is in the season – with only a few resorts even operating – I think THEY would even tell you that THEY would see “the glass half full” if we got some substantial RAIN right now. The 5-10″ of snowfall certainly has helped in the West Virginia mountains, but the rest of us could use a little moisture of ANY KIND right now.

According to the current forecast we are seeing a very weak front moving in from the west Thanksgiving morning with hardly any rain. We’ll take anything from that one though. Then there’s a decent opportunity for beneficial rainfall the first half of next week – but nothing that would signal an end to the drought conditions. But again, good rain would be…good right now.

A third front approaches Monday with a better chance of showers Monday afternoon into Monday night. Weather gurus are keeping a focus on the middle of next week as an area of low pressure organizes in east Texas and moves northeast. That one could connect with a healthy round of Gulf moisture and produce some moisture that would be enough to make a difference.

We NEED that as right now I am typing this Mountain Report…and I’m smelling SMOKE from the wildfires nearby. This is getting critical.

THE BEST SKI AND SNOW NETWORK FOR THE REGION IS….

Someone emailed overnight asking about advertising with us and they wanted us to compare ourselves with another regional resource that reports on the ski conditions for the Southeast and mid-Atlantic. I couldn’t do it. By that I mean there is NO WAY to compare our outreach and traffic.

We ran analytics recently that prove that our ski coverage receives TWENTY TWO TIMES the amount of traffic monthly than our closest competitor! We have SEVEN TIMES the number of first page Google rankings and our audience continues to grow – thanks to you guys spreading the word.

By the way – thanks for that!

We’re always ending our posts and emails this time of year with “Think Snow” or “Think Cold”. Now we can add a few more to the list.

As oldtimers will tell you – “this too shall pass”. The season is now upon us and we will focus on that good news with a prayer and positive thoughts for some consistent cold and moisture that will make for an end to these horrific wildfires and drought conditions AND make for GREAT TIMES on the slopes.