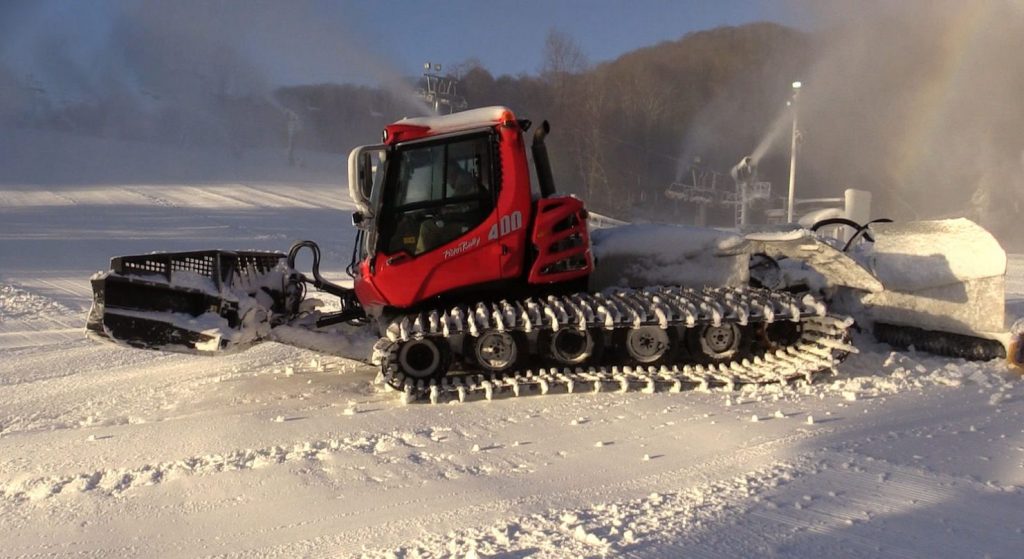 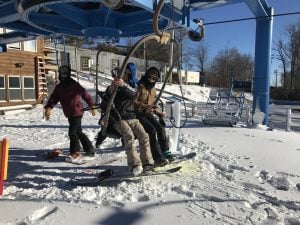 First chair went to these guys

First of all – congrats to Zeb Powell, Nico Pepitone, Andrew Lofler, and Siler Wyatt for getting the first two chairs on the mountain for the 2016-2017 season at Cataloochee Ski Area.

Thanks also to President and General Manager, Chris Bates and to Marketing Director and Spokesperson Tammy Brown for allowing us to interrupt their normal opening day schedule on Monday morning. 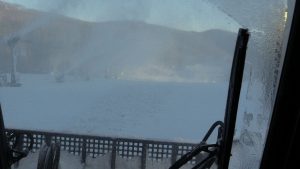 Visibility can be a bit hairy on the slopes when all of the snowguns are blasting. Click to enlarge!

Kenny Griffin and I got an early start at 5am and I arrived at the mountain at around 7:20am and Chris was gracious enough to stop by and pick me up on the Piston Bully groomer on one of his laps around the mountain.

I’ve had the pleasure of riding with a few mountain ops crews and that is always a blast to see the slopes from the groomer’s perspective. There’s a lot that goes into properly creating that corduroy that we all know and love. I’ve been asked many times about how the resorts “blow snow” and lay down a surface that is awesome to ski or snowboard on. The truth is you really wouldn’t want to ski or board on man-made snow as it comes right out of the fan guns and snowmaking equipment. Those guns obviously have to do their magic first – but then the snow maintenance and grooming staffs have to apply artistic and patient care to driving the mountain in consistent loops that apply the corduroy that we get to play on.

Chris Bates may be the President of the ski area, but he’s also the primary groomer as he does about 70% of the grooming each season. He said that when the entire mountain is open groomers can work for about four hours to prepare the slopes for the day. Once a day is in the books, they make snow whenever the temperatures allow and “do it all again” grooming the entire mountain.

She and I have spoken numerous times over the years but the timing of my visits to the Maggie Valley have made it such that we had never met in person. Minutes after I arrived, I was pointed in her direction and as I caught her eye she quickly exclaimed, “Oh my gosh, Mike Doble…it’s so nice to finally meet you.”

It felt like we were longtime friends and I have a feeling she’s that way with everyone she meets…which is an awesome quality for a Marketing & Communications person. Thanks again, Tammy for being so accommodating.

We debuted SkiSoutheastTV last season and on perhaps as many as 50% of those LIVE FEEDS…the feeds were not LIVE at all. WIFI isn’t always the best in the mountains…and getting a phone signal can be p-r-e-t-t-y challenging. We saw that happen a lot at various resorts last season.

Cataloochee Ski Area actually has a FREE WIFI connection that was pretty good, but they also allowed us onto their private network for a few minutes and that did the trick as we were able to get a really good signal even down on the slopes by the OmiGosh lift.

As much as we try to think about what we want to go over…we should probably quit trying. We had game-planned to start at 9am and do a quick snow report, interview President & General Manager Chris Bates and THEN hustle down to show the lucky “first chair” peeps.

Well that was just not well thought out as first chair was happening at 9am. So we started a bit earlier and then popped over to the chairlift and then Chris was able to come over and join us for a few moments. If you were one of those who joined us ONLINE early this morning you saw what happens during a LIVE broadcast. Sometimes things don’t happen exactly the way you want them to 😉

However, all in all, we were really happy with the way things went and we were really impressed with the traffic to the site early this morning! Our network of SkiSoutheast.com, weather and webcams has seen 7857 visitors as of this post update (at 4:30pm). Pretty impressive numbers for November 21st when there was no snow on the ground 72 hours ago!

If you were not able to catch the LIVE broadcast this morning – that RAW video is posted on the front page as well as an edited version which includes a brief interview with Chris Bates. Watch that video below!

Now, I’ve just got to get back up there in February and get Tammy on camera! be ready Tammy!

We took a ton of video and some nice photos AND I literally drove within one-half mile from another of the wildfires burning in the region and I’ll share that in a bit. Check back often.