Hello skiers and riders of the Southeast.

As we march into March, we face a few consequences that occur annually. Our daylight hours are getting longer, the weather is getting warmer, and the ski season is getting shorter. These consequences spur further consequences such as spring-like snow conditions, a decline in desires to descend downhill, and tough decisions for the operators to make about extending the thrill further. Poignant problems.

Regardless of all of this, every one of us is gifted with the choice on whether to hit the slopes or not. A privilege to recreation, exercise, and opportunity. A chance to be outdoors and take in the majesty that mother nature has provided. Every time you sit your butt down on that spinning chair you are given another ride to freedom.

For you Warren Miller ski film buffs, he was famously quoted as saying “A pair of skis is the ultimate transformation to freedom.”

What I am getting at is that we should feel fortunate that we can make that call to ski or ride. I wish I could say the same for other skiing populations, especially those in and around a portion of the middle and eastern Carpathian Mountains, but I will hold off on discussing Ukraine’s situation until the end of this post… 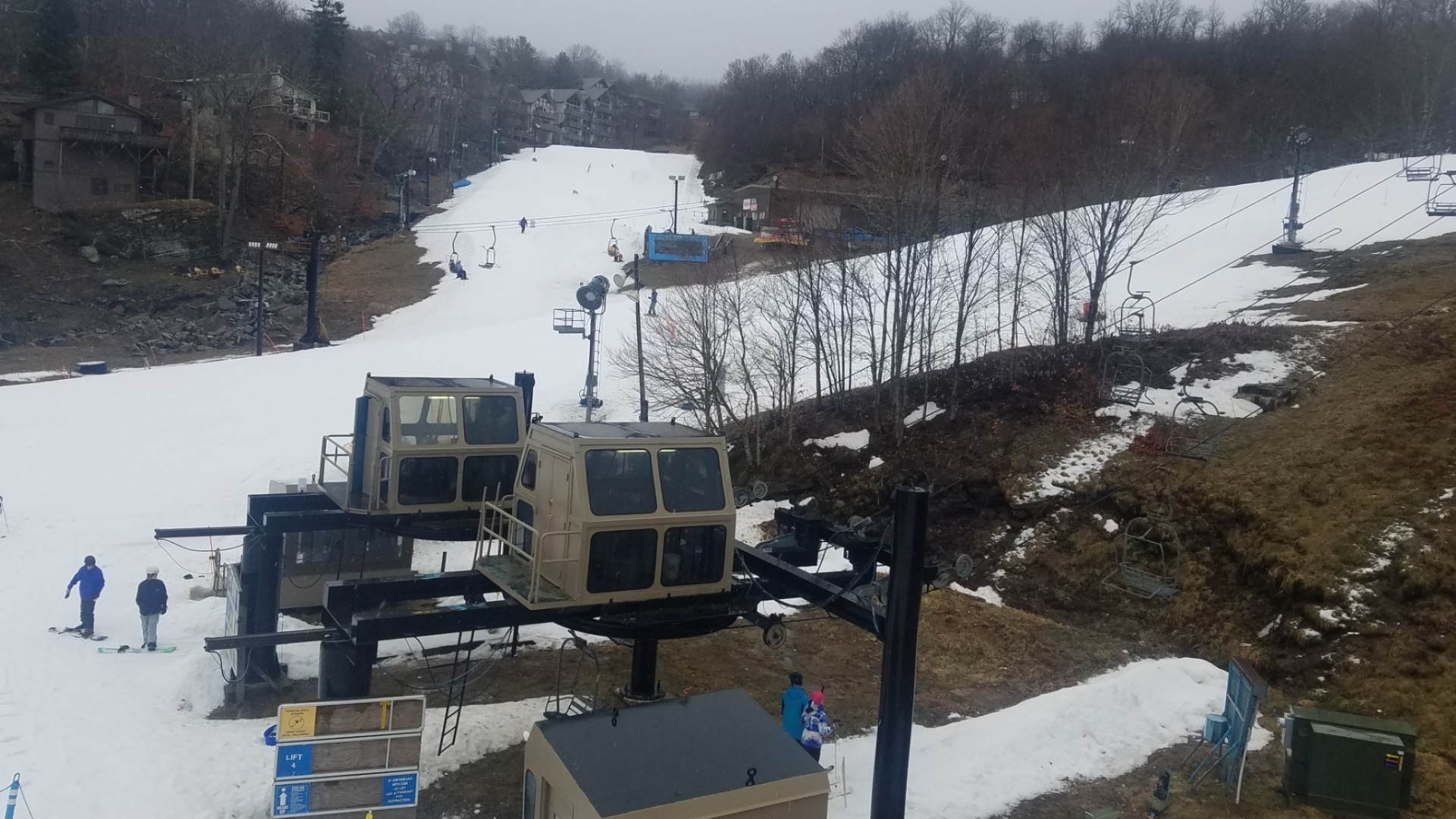 If you were able to make it up in the past week you probably got bombarded with rain, hit with higher temps, and shocked with ever-changing snow conditions. We are in the freeze-thaw phase of the year, and the time of day determines the grip and feel underfoot. Mother Nature’s assault on the base depth was consistent too, and the snowmaking crews had a prolonged duration of standby before amassing their own resistance. Fortunately, this recent cold snap allowed most places to fire up their snow guns and rebuild those depths. An ongoing struggle in which the manpower is withstanding the fury from above.

Product testing at Beech Mountain Resort on Sunday yielded mixed results in which certain runs were playable while others were thinly veiled, icy, and had a few exposed spots to contend with. I had to do multiple laps to establish the overall experience, and I concluded that Southern Star gets the gold medal (1st place), followed by Robbin’s Run receiving silver (2nd), and Shawneehaw comes in at bronze (3rd place), especially the upper portion. Each of these runs had enough soft man-made fluff to ease the turns and reduce the amount of energy exerted. One could argue that you could have spent an entire session on these runs and went home knowing that your workout was fruitful. Of course, these results are subjective, and you may have a different ranking. Would love to hear them from you. 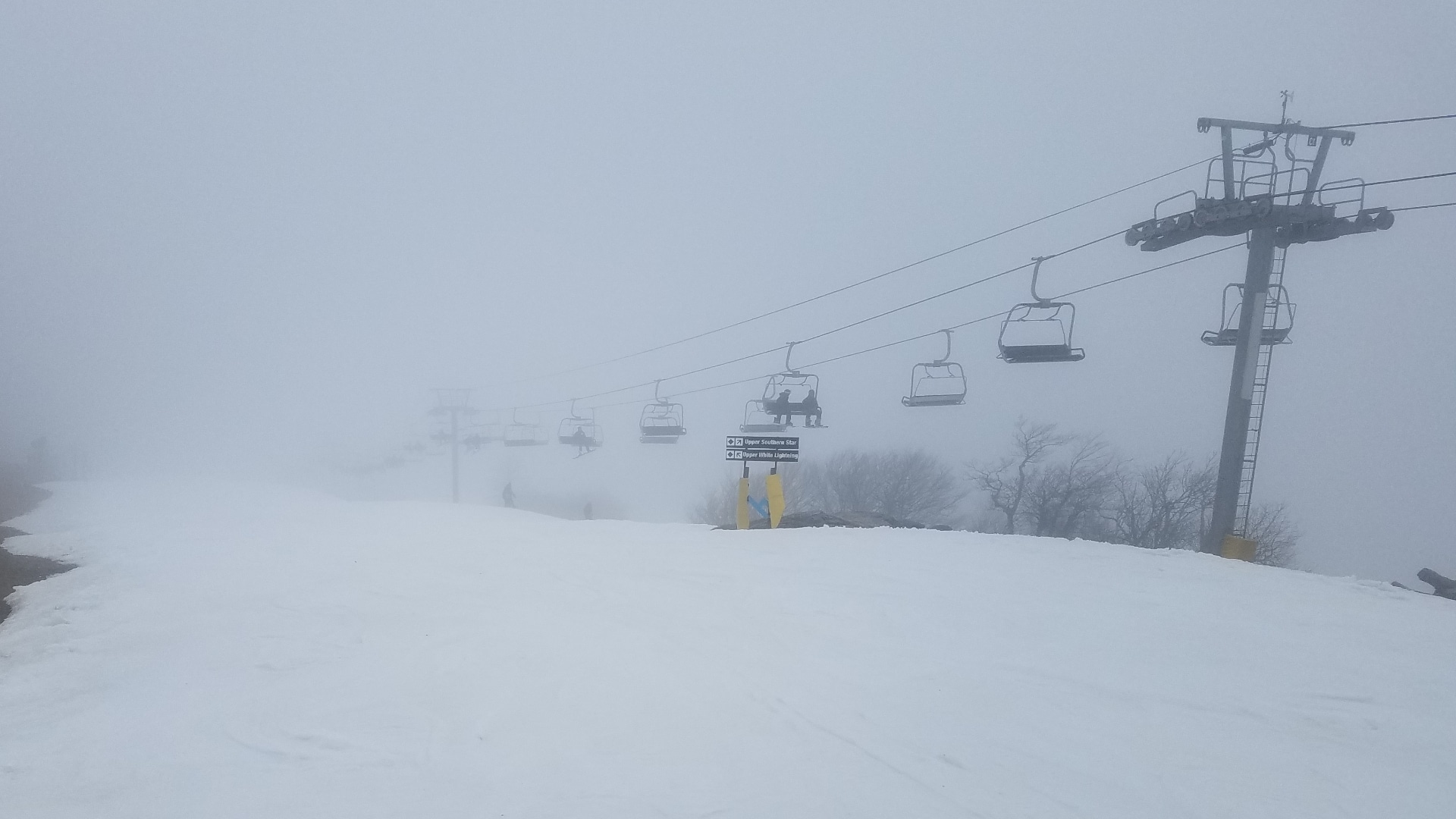 I would normally give their other black diamond run, White Lightning, a podium spot because they had some nicely shaped moguls to bounce along, but the concealed glaze below rendered it slick and more difficult to catch an edge upon. Even the expert skiers and riders struggled to dominate this face with ease knowing that possible landmines could trip up their trajectory.

That icy sensation was present in other spots too, but it was far from being a massive assault on the participants. That instead came in the form of thick fog and a solid drenching of moisture. On the first run of the day, I found myself asking “Why can’t I see anything when I ski at Beech this season!” knowing all too well that I’ve had multiple sunny experiences before, and that the highest elevations are subject to the most radical surprises. 5,506 isn’t just an elevation, it’s a dynamism. 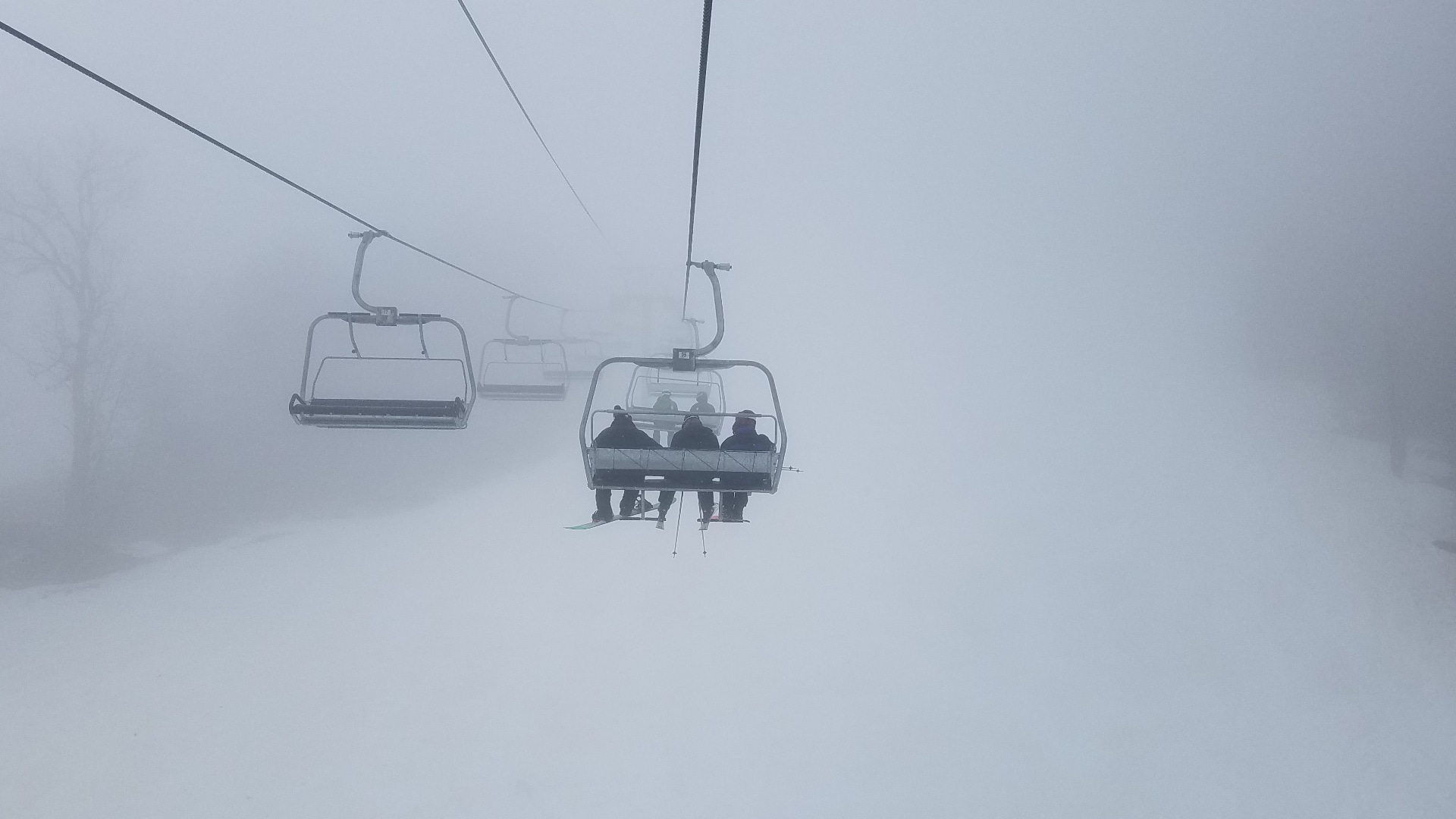 Fortunately, the weather phenomenon was not permanent, and there were moments of clarity and dryness. The same can obviously be said indoors at the Beech Mountain Brewing Co. Taproom & Grill where they offered their splendid variety of adult beverages and simple yet delicious menu options. Several people spent time here warming themselves up while drying their gloves and mittens near the fireplace. The hand dryers in the restrooms can provide some assistance too, but it is best to not overdo it.

This is the kind of place where you can take part in conversations with random people and share some tales and tidbits of life. I sat next to a couple that was energetically fun and had a passion for the mountains. I also found out they are set to be married this summer near Asheville, NC. So, if you are reading this Sean and Chelsea from Chattanooga, TN, I’d like to say congratulations and thank you for the chat at the brewery. Would love to hear a follow-up at some point.

While their celebration is at bright moment in humanity, our overall status as a species is overshadowed right now with the dangerous situation roughly 8,000 miles away. I try to not get too political in these takes, but it is hard to ignore the fact that the people of Ukraine are battling for far more important things than their right to ski or ride. Their fight is for their right to exist as a sovereign free nation much like our own.

Some online research shows that Ukraine is home to fifty-eight ski centers in which most are relatively smaller to mid-sized resorts with vertical drops ranging roughly between 500 to 1,800 feet, similar to our own region. The Carpathian Mountains prop up the very Southwestern corner of Ukraine, and their highest peak name Hoverla is barely taller than our own Mount Mitchell by a whopping 78 feet (6,762 versus 6,684). It is coincidental that Beech and Spruce trees thrive there too given that their latitude is on par with our New England and Southeastern Canadian flanks. However, their timberline is stunted in height and the exposed summits get snow capped in the winter months much like our own Rockies, Cascades, and Sierras out west.

The point I’m trying to make is that every Ukrainian ski location has been forced to shut down until further notice due to a war they did not want or provoke. This unfortunate consequence born from political aggression not only affects them, but also people from nearby locals such as Moldova, Hungary and even some Russians who want to venture a longer distance to find freedom on the side of a mountain. Sure, there are other piles of rock nearby with available ski centers, but everyone has their favorite locations, and perhaps some of them must halt for now.

We should understand with gratitude and appreciation that we still have time during this season to make those turns, even on those foggy and soggy days. The only factors in play here are weather related and the justifications for our resorts to remain open based upon overall visitations. So why not go for it while you can? The offseason is a long waiting period, but for some folks it will unfortunately drag out even further and be exceptionally harder than the rest of us. 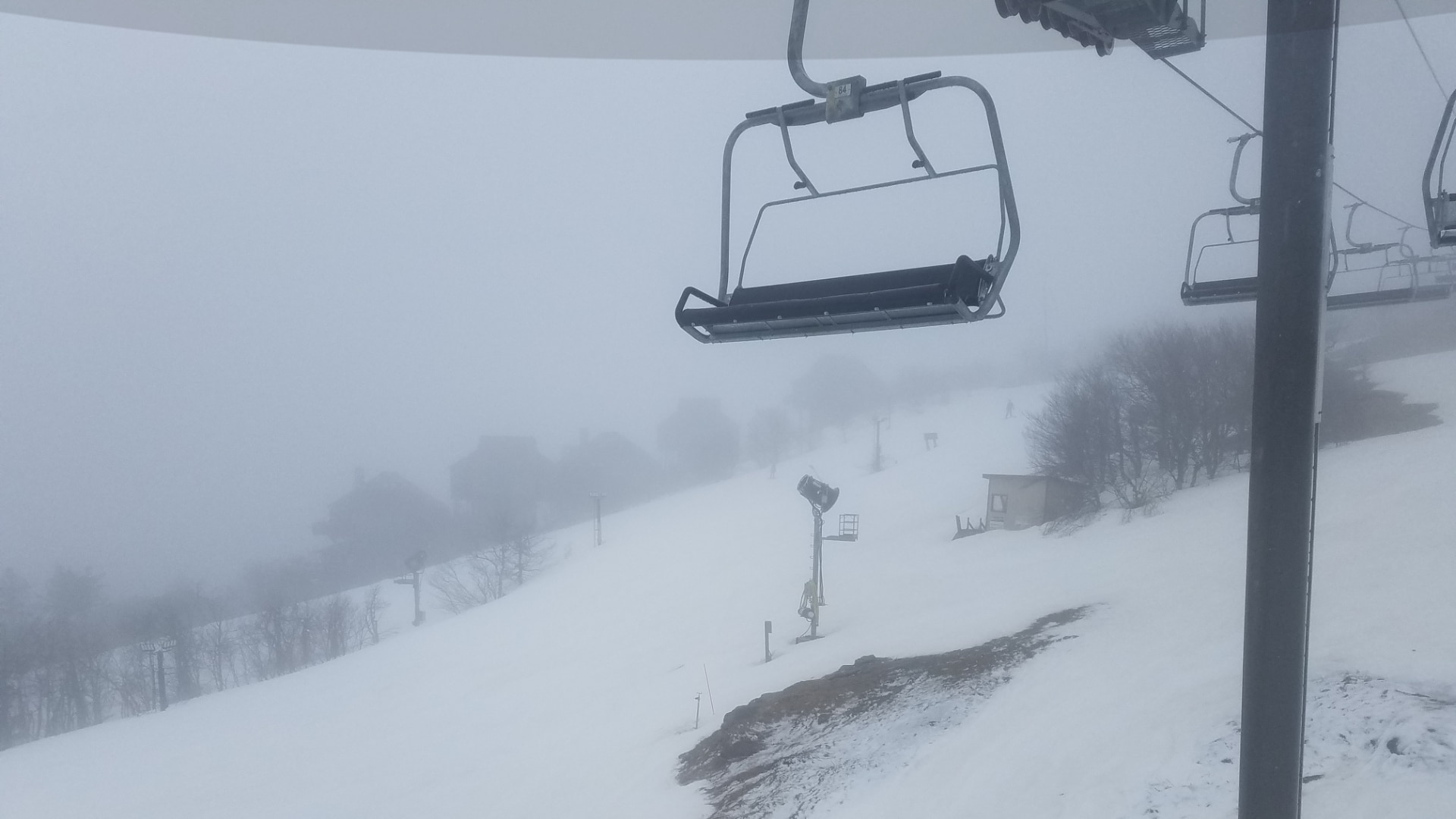