Baby’s It’s COLD OUTSIDE! Nearly All Resorts are Making Snow! 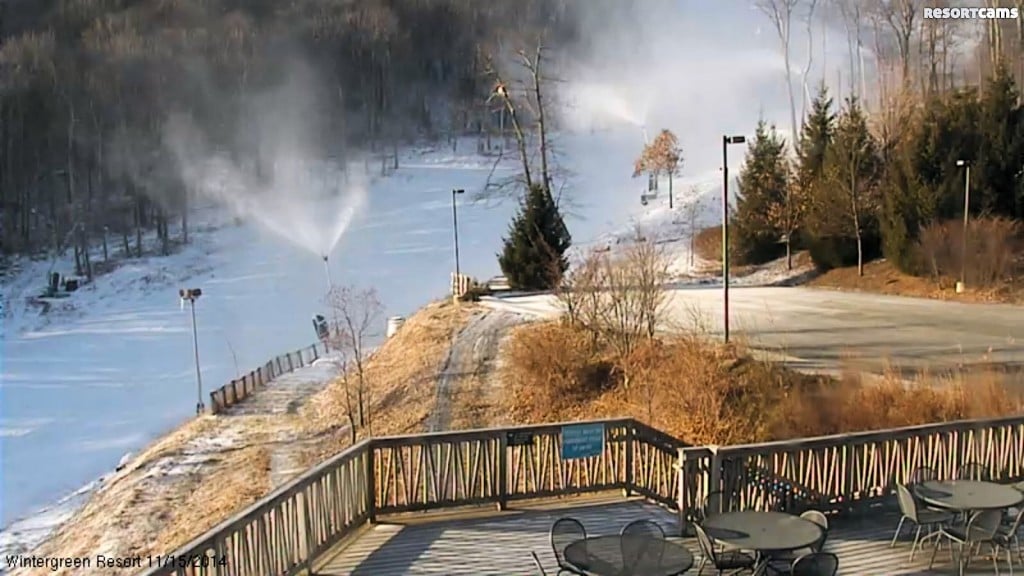 First – my apologies that we had not been updating the NON OPEN resort’s snowmaking data. I’ve toured all of the ski areas this morning and updated them accordingly. Suffice to say that all but Bryce, Sapphire and The Homestead are making snow this morning and preparing for their opening days.

Of course Cataloochee Ski Area and Sugar Mountain Resort ARE ALREADY OPEN with Sugar offering day and NIGHT skiing on Saturday.  I’ve provided a brief bit of information below for each resort and of course you guys can check the snow reports page for even more information – such as snowfall totals so far this season, etc. Southeast and Mid Atlantic Snow Reports 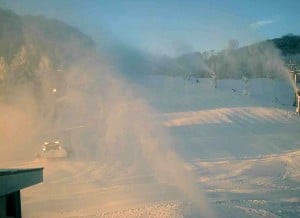 Massanutten Resort – 18° – Making Snow. We posted a snowmaking video clip from up there and Mass tied a record for early snowmaking when they cranked up yesterday. We’re looking at ADDING a THIRD LIVE cam there soon!

Beech Mountain Resort – 20° – Making Snow – I spoke with Gil Adams last week and he told me that they were looking at opening the day before Thanksgiving. They are making tons of snow from Upper Shawneehaw down and want a quality product prior to opening for the season.

Wisp Resort – 16° – We assume they are making snow. They have not posted anything on their site; their webcams are all dead; they haven’t answered our emails, etc

Ober Gatlinburg – 18° – They are making lots of snow and their tubing hill looks to be ready to open anytime. The slopes look pretty awesome as well. We don’t have anything in place with Ober yet in terms of reporting, but we’ll try to get with them soon to get you guys updated.

Bryce Resort – 18° – They are snow covered but not making snow this morning. They plan to open December 13th so they may be waiting just a bit longer.

Wolf Ridge Resort – 16° – We assume they too are making snow but there’s no report.

Sapphire Valley – NO REPORT – But not making snow just yet

A SALUTE TO THE SNOWMAKERS 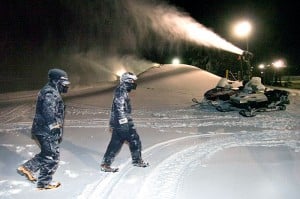 We all love powder that falls from the sky. That’s a given. However, if our great resorts were only open with natural snowfall, we’d be fortunate to ride the snow on maybe 5-10 days a season at some resorts of the area; perhaps 10-20 days a season at many of the mountains in the region and less than one-half the season at even the more natural-snow-prone mountains of Canaan Valley, Timberline and Snowshoe Mountain.

As I walked out my front door this morning I couldn’t help but notice that sharp stab in my lungs as that first, real “taste of winter temperatures” entered my body. It was COLD on Friday in the High Country as temperatures never climbed out of the 20s all day. Last night at around 9:30pm I looked at our thermometer which read 18° and my thoughts quickly turned to an image that I saw earlier in the day while I was “touring the LIVE webcams” at the ski resorts. (See http://www.resortcams.com/ski-cams/ and click on your pick of cams.)

When I clicked onto the Canaan Valley Resort webcam, that “image” was of a lone man who was walking in the midst of a manmade snowstorm of snow making machines. The temperature reading at the bottom of the webcam image showed 23°. Many of you who are reading this story have yet to even put on a warm sweater as temperatures in your hometowns may still be in the 60s.

Earlier on Friday I was looking at the weather for the Florida Gators football game this weekend and saw that the current temp was 71°. In Columbia, South Carolina the temp was 68°.

…and here was this “image” of a man, dressed in a thick, heavy coat and thick gloves, and ski pants and boots – trudging through the snow…right into this manmade blizzard to adjust the snowmaking equipment for optimum performance.

That’s a job that often goes unappreciated by those of us who just hit the hill and ride the snow. Snowmaking is hard enough during the daytime hours and ski resort mountain managers are very happy souls when they’re able to make snow when the sun is shining. However, what many of you may not be aware of is that all too often our snowmaking heroes are doing so in 12 hour shifts that last through the night from 7pm to 7am. That is when there is no sun to help moderate the bone-chilling temps. That is often when temperatures at the highest elevations dip to single digits. All too often those frigid temps are accompanied by winds in excess of 30-40 mph.

After about an inch or so of snow had fallen Thursday night into Friday morning and after the sun went down Friday evening, I went out to gather some firewood and could not believe how frigid the air felt.

My thoughts turned again to that Canaan Valley Resort snowmaker.

Snowmaking equipment is now howling at nearly every resort in the region as of this writing. Without it there would have been NO skiing or snowboarding just yet this season…and yet Cataloochee and Sugar have now been skiing for 13 days. In fact, Cat has skied for the first 13 straight days of this early 2014-2015 ski season while Sugar was only closed for one day this week.

We posted a video this morning that effectively shows just how efficient the snowmaking equipment and the snowmaking crews are in our region. Cataloochee began making snow on Halloween and then opened November 2nd. Check out that video at https://www.skisoutheast.com/all-videos/

We also posted a video that Snowshoe Mountain posted prior to last season which speaks a bit to the $1,000,000 spent in recent upgrades there.

If you’re able to ski or ride this weekend…give a shout out of thanks to the guys who do the heavy lifting and hard, cold work of snowmaking so that all of us can play on it.

I’m headed oout early this morning to attend a football game in Greenville, South Carolina…so check out the snow reports for openings, snow depths and more.

Be sure to check out the Snowshow Cams, the new Wintergreen webcam and the Beech Mountain Cams which are all now online.

Previous Post
And We’re Back in Business!
Next Post
There are Some HUGE Mounds of Snow Out There!