There are Some HUGE Mounds of Snow Out There! 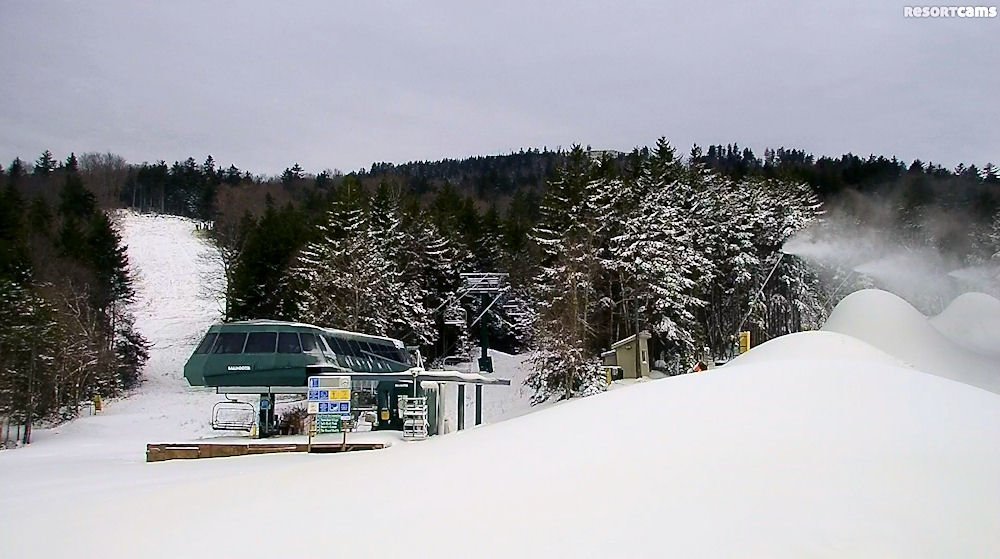 It is an average of 14° milder this Sunday morning than it was 24 hours earlier around the region. The temps were hovering from 24-32° this morning atop all the resorts and that has the snowmaking equipment off at some locations and soon to be off at all of them.

However, many of our ski areas were able to blast the slopes with snow for most of the last 30-48 hours and there are some rather IMPRESSIVE mounds of snow out there!

You have to check out the huge mountains of snow that are seen via the Boathouse Cam at the base of Snowshoe Mountain!

Cat and Sugar are open for play today and you can check out the full report below as I took the time to update all of the resort’s snow totals so far this season.

Cataloochee – 32.7° – They made a TON of snow over the last 30+ hours but the snowguns are off now, which will make Sunday’s sessions all that more awesome. Our Kenny Griffin is meant to be snowboarding at Cat today and he will no doubt report how sweet it is to be in love with Cat today…when he returns to handle the reporting on Monday.

Cat is playing on 10 trails today and a base of 18-32″ of sweet, manmade and groomed surface.

Sugar Mountain – 29° – Open with a 16-41″ base and 7 trails for day and night sessions on Sunday. Sugar IS still making snow up top, but the guns should go silent in just a bit.
In OTHER NEWS…

Beech Mountain – 32° – They SAY that they are making snow, but the webcam says no. They PROBABLY JUST turned them off. The LIVE webcams are now back online for the season and they pretty much tell the story. The “story” in this case is that they COULD be open right now! They plan to open the day or so before Thanksgiving. Things are looking pretty awesome at Beech’s 5506′ elevations.

Wintergreen Resort – 24° – They are currently making snow on: Upper and Lower Dobie, Eagles Swoop, both Cross Trails, The Plunge, Lower Turkey, Tequila, Lower Sunrise, upper portion of Tyro and the upper portion of the Terrain Park in preparation to open Thanksgiving Weekend.

Snowshoe Mountain – 26° – It almost seems unfair how much snow these guys can churn out! One look at the LIVE cams will show you some impressive mounds of snow in preparation of their November 26th opening day. Additionally, here’s a look at recent snowfall atop their 4848′ elevations!

Timberline Resort – 32°- They’ve been making snow but the snowguns look to be off this morning. But check out the tables at the base of the mountain. There’s a LOT of snow that has fallen up there. 10.1″ on the season so far and there’s about 5-6″ on the ground!

We’re implementing another new LIVE stream up there, but for now check this view out!

Winterplace Resort – 33° – Check out their snowmaking thus far at: http://www.resortcams.com/webcams/winterplace/

Ober – 37° – They’ve made at every opportunity in preparation for their first session of the year which is scheduled for 11 am on 11/22! That’s next Saturday.

Massanutten – 32° – They made quite a bit of snow on selected trails over the last 30+ hours and will make snow at every opportunity to open asap.

Appalachian – 25° – NOT MAKING SNOW this morning. Not sure why as they had been for the last 30 hours or so. Opening day at App is just four days away as they plan to open November 20th.

If you’re thinking of getting in some early season skiing or snowboarding, don’t forget that to celebrate Appalachian’s first day of skiing and riding that they always provide FREE SKIING (free lift ticket) to the first 100 guests to show up to the Ticket Cashier Window.

Wisp – 28° – They report that they are making snow and opening soon. Is it just me or do the rest of you think that their website is horrible compared to the one they had the last couple of years? No, it’s not just me…

In closing – it sure would be nice if we had a resource for snow reporting like this one that was originated by David Lecher up in Davis, WV. http://data.canaanmtnsnow.com/

You can go all the way back to 2001 and see snowfall totals for every single day. The ONLY resource that we are aware of that can provide you with anything close to this in terms of snowfall totals for each of our ski resorts for the last several years is – UM – us…right here at SkiSoutheast.com!

Until next time…look for Kenny to update you guys during the week this week and I’ll see you next Saturday.

Email me your thoughts, pics, vids, etc at [email protected]