Autumn Color, Rain, Live Cams – We Talk About a Lot of Things this morning!

It is a raw, wet, messy day outside this morning and this is not the kind of day that we should be attempting to get you guys to have a look at our High Country Web Cams website, but we’ve spent so much time on it over the last couple of weeks that we simply can’t help ourselves. Late on Tuesday we finished up an install of a new camera up on Howard’s Knob (looking away from Boone) that NORMALLY will be providing some awesome sunrise shots and spectacular, long-range views. About two weeks ago we installed a brand new camera at our "Boone Overlook" location and we were able to reconnect an old favorite – Highway 105 – camera that will provide some great road conditions views for the upcoming winter season.

Weeks prior to that we reinstalled the Chetola camera that will give us a bird’s eye view of this winter’s Blowing Rock Winterfest Polar Plunge activities. That camera location provides a great view of Hwy 321 across from the Shoppes on the Parkway as well, so it will be good for those of you headed up to Appalachian Ski Mountain this season.

We’re also testing a LIVE, STREAMING CAM that is currently aimed out our front window here at our offices on Highway 105, but that camera is a wireless system, designed to send LIVE, STREAMING images from the camera to a receiver more than 3/4th of a mile away! We are attempting to get that camera system installed up ABOVE Ski Beech to provide what we think will be an almost aerial view of the entire mountain!

It is funny to think back to eleven years ago when we first put up a webcam.  I remember taking some old RCA camcorders and wiring them with RCA jacks to a video capture card through an old program called webcam32 and we allowed them to FTP images to a simple server. The first "outdoor cams" that we put up were those old camcorders wrapped with garbage bags and duck taped up for "weather proofing".  Funny!

Those first "shoe string systems" were popular though as we were featured on THE TRAVEL CHANNEL, DISCOVERY CHANNEL and numerous television stations around the Southeast.

TRAFFIC UP, TRAFFIC DOWN, TRAFFIC BACK UP AGAIN – Camera Traffic that is!

The HighCountryWebCams.com site has been more of a "hobby" site over the years and we’ve always enjoyed being known as "those people who do all of those webcams around the region", however over the last eighteen months we’ve had so many other irons in the fire that we simply allowed the website to fall into "neglect".  At one point a while back we had as many as 20,000 unique visitors a day coming to it.  However, we never had the time to promote it and make anything of value with the traffic from it, so as cameras deactivated traffic dipped to a point that as of June 2009 we had only around 5500 first time visitors within that month and about 3500 unique visitors a day. Not bad for a "ghost town" kind of a website but traffic was off by 77% or so.

I was recently convinced that just letting the website die on the vine was not one of our smarter ideas and here we are four weeks, and several cameras reinitiated later and traffic is on the rise.  According to stats tracking tools September 2008 saw just 9879 first time visitors and about 5000 unique visitors per day. We bottomed out in June and now as of September 2009 traffic was up 48%.  As of October, we’re off the charts so far!  So the old "if you build it they will come" scenario works when it comes to showing people the area that we call "home".

IT AIN"T PURTY THIS MORNIN’ THOUGH! 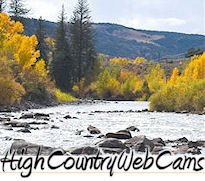 As previously mentioned, we touched up some links and scripting late on Tuesday and had planned on bringing all of the new work to your attention today and then we get ONE UGLY DAY to present the new views to you guys!

That’s okay because many visitors got the jump on us anyway as 11,213 unique visitors looked at 90,415 camera pages on Tuesday!  The LIVE, STREAMING 105 camera seems to be a huge hit and if we can work things out, we will attempt to get several more of these kinds of systems running across many of our area’s resorts in the coming months and years!

So hop over to www.HighCountryWebCams.com and look around, save it as a favorite and spread the word.

I was speaking with an industry insider yesterday and the subject of the approaching cold weather came up.  We shared some information about how cold it’s turning over the next few days and then he shared, "One of these days we’re going to see ONE of these ski areas start making snow on October 15th or so and open up just to say they did it."

Wellll, that’s kind of what we’ve witnessed over the last few seasons.  Remember that Cataloochee provided us with Halloween skiing and snowboarding last October.  When I reminded this friend of that, he replied, "Oh my Lord, do you think it’s possible?"

PROBABLE? Probably not.  POSSIBLE? Yes.  According to all of our meteorologist friends we’re going to see temps that are plenty cold enough to make snow Saturday night, a lot of the day on Sunday and even Monday night with temps in the 20s Sunday and Monday night around Banner Elk and Sugar Mountain – home to the typically "first to pull the snowmaking trigger" Sugar Mountain Ski Resort.

…and OH YES, SNOW is in the forecast.  It will probably be nothing more than a dusting, but snow in October always excites the soul – as well as every ski and snowboarding freak on the planet.

Temperatures look to be moderating a little over towards Cataloochee Ski Area’s neck of the woods above Maggie Valley, so even while they are THE FIRST or among the first to make snow, they might be borderline on this round of cold air. We haven’t spoken with Tammy Brown over there yet so this is ALL VERY unofficial.

It’s going to be a bit snowier and colder up around Snowshoe, Canaan Valley, Timberline and Wisp Resort in Maryland, but you won’t see any of those guys making snow at this point.  It’s just not in there makeup to do so. But hopefully we’ll get some early, preseason photos and videos to share with you guys. (Hint, hint Lori, Laura, Lenora, and Jessica! You know who you are.  Send those photos!)

We’ve received more than a few emails from those of you who think Sugar or Cat will pull the trigger and make snow this weekend. We’re going to put our neck out there and say "not this time around". While there’s an outside chance that it could happen, we think this particular cold and weather pattern will be a little too borderline to see that happen.  Look for that to happen if the temps nose dive a bit more AND it looks sustained for a day or two.  Otherwise, maybe the NEXT system.

As always thanks to all of you who make what we do here, possible!