Our skiMail INBOX has been flooded today with emails about the webcams and about "possible" early season resort openings.  I’m surprised at the webcam traffic over on www.HighCountryWebCams.com because frankly it is U-G-L-Y day in the mountains!

As far as early season openings we received a press release from outside of our normal area of coverage that shared the fact that Sunday River in Maine opened today. (Yes today.) 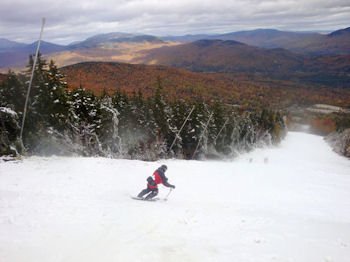 In an unannounced move, the ski area is offered free skiing and riding through 3:30 p.m. on Wednesday (today).  The popular ski area received nearly 3" of snow on Tuesday after they’ve been able to make snow to open the resort.  Dana Bullen, Sunday River General Manager was quoted as saying, "Cold temperatures and advanced snowmaking technologies including tower guns and fan guns helped us open.”

He added, “Opening ahead of the pack is a great treat to offer skiers and riders across New England and we’re proud to be able to stake this claim for a third year in a row.”

They "only" have one trail open on the upper portion of the mountain and it is for advanced skiers and riders only. Lift access will resume at 9 a.m. on Thursday and will remain open though Sunday, before temporarily closing for the following midweek period.

While the destinction of being the first ski area to open in the Southeast, Mid Atlantic or per state is still a marketing bonus, it is certainly lesser so than that of being the first to open on the east coast. So we’ll keep an eye and ear out as to whether or not the approaching cold temperatures and possible snow showers allows any of the Southeast’s ski areas to open.  As we mentioned earlier, that honor is usually held/won by Sugar Mountain or Cataloochee.  We’re still speculating that the approaching cold front will not be quite sustained or efficient enough to allow for an early season opening, but we’ll let you know if that changes!

Previous Post
Autumn Color, Rain, Live Cams – We Talk About a Lot of Things this morning!
Next Post
Got $270,000? That will buy you a Ski Resort in Montana! It’s True!