In 1982, Corky Fulton opened his first sporting goods store, Sage Sport. Today, with locations throughout the Carolinas, the Fulton family is one of the the area’s most trusted suppliers of athletic gear, including ski and snowboard equipment. Not only do the retail locations thrive, but the online store has managed to prosper as well. 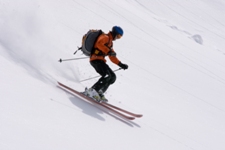 Over the years, the chain has grown and the online component of the business, BasicSkiwear.com, has steadily developed. “We’ve been online for a while,” said Sage Fulton, who now takes care of the internet side of the business, while is father, Corky, still manages the retail end. Since 1997, the online store has been catering to the needs of skiers and snowboarders, as well as other athletes and outdoor enthusiasts. According to Fulton, the online store is able to stock items that people who are spending a day at one of the many Appalachian ski areas might not necessarily need, whereas the retail locations cater more to the needs of local snow lovers.

As far as brands go, BasicSkiwear.com, as well as the Sage Sport retail locations, stock only the best. From North Face to Columbia, Wigwam to Gyro, this family operation is dedicated to providing the best gear at the lowest prices. When asked about some of their most popular products, Fulton answered with a chuckle, “Believe it or not, ski bibs.” In addition to Rawik ski bibs for men, women, kids and toddlers, BasicSkiwear.com also has some great deals on goggles. “We have Scott goggles that would normally go for $120 or $130 that we can sell for fifty bucks right now,” said Fulton. Buyers can also get great discounts on products from last year, like thermals.

Fulton was also enthusiastic about the new advances he has seen in ski and snowboard gear over the past few years. “If you buy a $150 jacket this year, you get a lot more,” he said. Basically, prices are coming down and equipment is getting more and more advanced. Skiers and snowboarders are getting more for their money now than ever before.

With BasicSkiwear.com and the rest of the Fulton’s retail locations, buyers can rest assured that they are getting the most value for their money. “We look for value where it’s important,” said Fulton. “That’s pretty much how we get our prices where we do.” With so many locations throughout the Carolinas—including Sage Sport locations in Boone, Mount Airy, Kings Mountain, Asheboro and Gaffney, and Fancy Gap Outfitters in Mount Airy—and of course, the online store, outdoor enthusiasts and athletes all over the Southeast and the country are finding out what this well-established local business can do for them.

Previous Post
Mama G’s
Next Post
Autumn Color, Rain, Live Cams – We Talk About a Lot of Things this morning!