Sugar Mountain, Appalachian and Wolf Ridge Resorts are OPEN for skiing today and tonight. Cataloochee and Beech will also be open tomorrow – Saturday!

West Virginia and Maryland Ski areas getting LOTS of snow and preparing for opening NEXT WEEKEND, December 9-10th.

Let’s make that the top news of today. 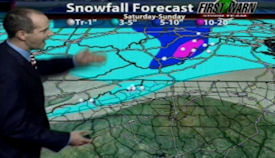 Brad said that the storm was located over the northern Rockies last night just prior to midnight when he posted his update (yes, he’s a hard working weather dude). He said that clipper system is picking up energy from Canada and will be diving south and east as we go through the day on Friday.

We woke up to some northwest flow snows this morning across the region (we’ll report on that in a second) but he says "that’s nothing compared to what’s heading our way for Saturday".

He said that we’re going to get a "double whammy" or perfect setup for snows to the mountains of the Southeast for the weekend. We’ll see a LOW bring us snow and then the northwest flow snows will pick up on the back side through Sunday and possibly even Monday.

On Friday he’s expecting some leftover snows coming off the Great Lakes particularly for the West Virginia mountains. However as we get into Saturday we should see the system move in first to the North Carolina mountains and then into the Virginias. The heavier snow will be into Saturday night and into Sunday.

Brad is forecasting "at least" 3-5" in the North Carolina ski area communities and maybe a little bit more at Beech and Sugar. Brad is the ONLY meteorologist forecasting a "bull’s eye" of snow that could get 10-20" of snow this weekend.

I was talking with Joe Stevens of the WV Ski Areas Association this morning and he said, "naw, maybe, maybe 8"". We’ll see I guess. Brad’s been pretty darn accurate over the last three seasons and I’ll take his snow loving forecasts any day…especially over the gloom and doom forecasts that are coming out of some weather camps that are forecasting a "challenging season" for most of the ski areas of the south.

Brad closed his forecast by saying that we should see PLENTY of cold, cold air for these next two weeks as the ski areas prepare the slopes for the all-important Christmas-New Year ski period. He’s also hinting that we could be seeing ANOTHER snow event for next week.

THAT’S WHAT I’M TALKING ABOUT…

Appalachian Ski Mountain – 20° – Trace of new snow and lots of snowmaking! – App will open today with six slopes, including the Appaljack Terrain Park. They’ve made so much snow says Brad Moretz that, "After 48 hours of round-the-clock snowmaking, and for the comfort of our guests, most snowmaking will not take place on open slopes during the day on Friday."

Drew Stanley, App’s Marketing Director shared, "For Saturday, we expect to add Orchard Run and the Appal Jam terrain park. Both Saturday and Sunday, we will be celebrating 49 years of skiing, and rolling back ticket prices to 1962 levels. $5 tickets will be offered for the 9-4 day sessions only.
Ice Skating will also begin on a regular schedule Saturday, December 4th, with 2 hour sessions beginning at Noon, 2:30 and 7 pm."

Sugar Mountain – 19° – They picked up another .5" of snow even though they aren’t reporting it. That’s 2.5" over the last few mornings and 6.5" on the season thus far. They’ve bombed the slopes with snowmaking and are open with six slopes today and tonight and Easy Street is open now – which is a phenomenal slope for beginners as it offers a long-gliding trail that has very little pitch to it. Even the lift itself is low to the ground which helps to acclimate newbies to the sport. Sugar is reporting a base of 12-40".

Wolf Ridge Resort – 25° – 1" of new snow and 2" on the season thus far. – In a move designed to "WOW", Wolf opens TODAY for skiing and snowboarding from 9am through 10pm on 3 slopes to start and they may have five open by the end of the day. Tubing opens on Saturday. Very cool Orville! Very cool!

Beech Mountain Resort – 18° – Beech OPENS SATURDAY! Gil Adams is reporting another one-half inch of new snow and 2.5" over the last two-plus days. Lots of snow is in the forecast for this weekend’s opening day (Saturday). They’ve been blasting the slopes! Beech has now seen 7.7" of snow on the season according to CocoRaHs.

Cataloochee Ski Area – 33° – They’ve had a TRACE of snow the last three mornings and they’re making tons of snow to reopen tomorrow, Saturday.

Wisp Resort – 23° – They’ve seen 2-3" of snow in the last couple of days even though they aren’t reporting it on their site just yet. They are BOMBING the slopes with that amazing snowmaking plant of theirs and we’d expect an opening any – ANY day now. CocoRaHs is officially reporting 2.5" of snow on the season up that way so far and they should be BOMBED with natural snow this weekend!

Snowshoe Mountain – 19° – 1" of new snow and 7" on the season. Laura updated the snow report this morning with the thrill of SNOW in the forecast as the NWS is forecasting 6" + over the weekend. If she gets a look at Brad’s forecast we’re sure they’ll be smiling even more. Snowshoe’s weather forecast is for around the clock snowmaking temps and POWDER. Brad Panovich is forecasting perhaps 10-20" of snow for the Snowshoe area between now and Monday with more coming NEXT week. That bodes well for an all-star opening weekend December 10th!

Canaan Valley – 16° – 1" of new snow and 8.5" on the season. Canaan Valley has some great things planned with SkiSoutheast this season and we’ll share some of those with you asap. They are blasting the slopes and plan to open next weekend. With all the snow coming in it should be a marvelous opening weekend December 10-12th.

Timberline Resort – 16° – My man David Lesher up in Davis runs the best weather content around the region and he’s reporting 1" of new snow for the Davis area this morning and 8.5" on the season thus far. Timberline Resort is making snow like crazy to open December 9th. They are in that TARGET area for major snow this weekend so what an opening!

Winterplace Resort – 25° – CocoRaHs reported another TRACE of snow for the Ghent, WV resort this morning. Winteplace’s site is reporting 63° – bear in mind they are not updating things there yet! It is plenty COLD and they are making snow and plan to open December 11th.

Massanutten Resort – 30° – We heard from Kenny Hess on Thursday. In addition to holding the position of Director of Business Ops for Massanutten, Kenny is the current President of the Southeastern Ski Areas Association. Kenny said that Mass resumed making snow Wed afternoon and have continued through the day today on Thursday. The forecast looks great for snowmaking through the next several days and Kenny shared, "The plan is to open on Friday, Dec 10, with all lifts operating and top to bottom skiing/riding. Good chance we will open this weekend for tubing only. Will send pics asap."

THANKS KENNY…and we’ll be in touch about some meetups at Mass this season!

Wintergreen Resort – 21° – They are making snow. Anne Maria writes, "21 DEGREES AT 7AM, ANOTHER GREAT NIGHT OF SNOWMAKING! Our big investment in additional snowmaking equipment this summer is really paying off. We are currently running on all 3 sections of the mountain including THE HIGHLANDS. No kidding, for the first time, we are making snow on The Highlands with plans to open it earlier than ever before. Keep checking this report for details about opening day and our Highlands progress. The mountain looks fabulous! We have a great forecast, predicting round the clock snowmaking through next week. You can bet we will make every minute count because we want to slide as badly as you do! We plan to ski, ride and tube on December 10th. Cross your fingers and toes for cold weather."

Bryce Resort – 36° – No snowmaking right now but they have been making snow and should be able to over the next week and open December 10th.

Ober Gatlinburg – 33° – They were NOT able to make snow overnight which is a bummer to Ober fans. They’re hoping to see the forecast bring some colder air this weekend. It looks like they MIGHT be able to make snow Friday night but the next several nights from Saturday night through at least the next week or so ALL look like snowmaking nights.

The Homestead – NO REPORT

So we have TONS of snow on the slopes. More are open today! Significant snow is on the way! It’s plenty cold! LIFE IS GOOD!