If you missed previous "blogisodes" (not sure but I MIGHT have just made that up) then click on the links at the bottom of today’s story and you can catch up.

Well so far I’ve received no "please stop, you’re boring me to tears" emails so we continue onward. 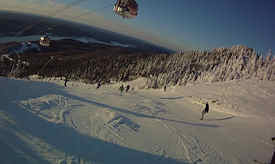 I learned something else about skiing in Canada on Tuesday. It can STILL get crowded even when you have 70+ trails open! Lift lines at the bottom of the village area by 11am were in the 20-25 minute range. Not fun, especially when even rich Tremblant has one of the slowest lifts (called Lowell Thomas) I’ve seen…with MAYBE the exception of Sugar’s main lift to the top.

I did notice that Lowell Thomas’ triple chair had nearly double the number of chairs in the cable than most. In other words they were very closely spaced on the line. That still did little to prevent huge lines at the bottom.

I learned something else in Canada. When you one of a very few people speaking English on the slopes, it does very little good to say "that’s okay" to someone when they about bowl you over. Either they don’t know what the heck you’re saying or they don’t care. I haven’t figured that out yet. 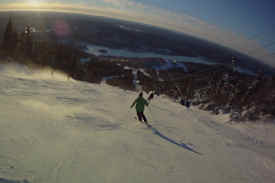 I HAVE figured out that the French influence on the culture in this part of North America makes for some varying degrees of what we, in America, consider to be polite. I’m fairly CERTAIN THEY ARE being polite but you have to THINK about whether or not they’re being polite to you. For example, a lady came knocking on our door on Tuesday and asked (in a deep French accent) "Parlez-vous français?"

We answered "We speak English". She then asked – this time in English, with a deep accent – "Do one of you drive the big white vehicle?"

I was the one driving that vehicle and told her so. Then she said, "You’re in my space. You come to move it, yes?"

Like I said, I had to think about whether or not she was challenging me. I mentioned that someone was in our parking space to which she answered as if she’d not heard me, "You will move your vehicle, yes?"

I answered with my tail now somehow between my legs, "Yes"…

She was actually very nice when I was moving my vehicle. I think she then realized someone was in my space and then was very accommodating. She still needed me to move, but she was nicer now.

The day of skiing was pretty good as some slopes were pretty open and long. Other trails were more of an effort to dodge people and navigate through the bobbing and weaving of newbie skiers – interlaced with some speed burners who evidently had a better navigation system than mine.

Conditions were amazingly good considering there’s been little natural snow. That’s another thing I learned about Canada. They’ve had 115 cm of snow on the season thus far. Okay, I’m not REALLY getting into the metric system, I’m just faking it. It was kind of weird enough just driving the SUV from Montreal to Mont Tremblant with the speedometer displaying only metric speeds. I kind of liked doing 110 kph on the way here! The 115 cm equates to 45 inches of snow compared to back home where we left a foot or more of powder and 66" on the season – to come here. Actually THAT felt strange as well. L-E-A-V-I-N-G powder to head to Canada and less snow was kind of a bittersweet moment.

However, there’s something else I learned about Canada. They may have only seen 45 inches of snow thus far, but when it snows in Canada, it doesn’t go away until sometime in June. Some of the locals told me that they’d had some good snows in EARLY December but not so much since and yet I’ll bet there’s more snow on the ground here than back home. However, I’ll also bet you it’s a LOT harder frozen here!

They had 72 trails open on Tuesday and they weave all over the multi-sided mountain that overlooks Lake Tremblant. In a strange way, some of the trails here reminded me a lot of Wisp Resort in Maryland…only you can understand all of the trail names in Maryland. Not so much here.

I keep learning stuff on this trip, which is kind of cool…but here’s something else I learned. You CAN have good ski conditions even when the temps rarely get above 10-15°F. While I’m on that subject I also learned that 10° here in Canada feels colder than 10° back home. It’s probably because -13 Celsius SOUNDS so much colder than 8.6° Fahrenheit. 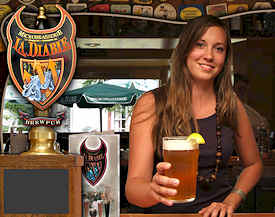 Seven of us took in a nice dinner within the Pedestrian Village du Tremblant. The village is so large that we’ve yet to see it all, but it is beautiful. Dinner was a ‘devil-icious’ adventure at the Microbrewery La Diable. Seven of us enjoyed steaks, baby back ribs, a HUGE basket of fries, stir fry, and food of varying origins and that along with a pitcher of beer brewed on location set us back about $250. (Remember we learned on Monday that they really like the food and drink here and really don’t want to part with it – hence the price. Truthfully though, a dinner for seven people back home at Outback Steak House would cost about the same so I’m protesting a little bit more than I should. I guess I’m more upset that a beer here costs $7.00 a glass. A pitcher is the better way to go, and that’s $22. (I don’t want to ever hear any of you ever complain again at the prices at some of our ski areas in the Southeast and Mid Atlantic.

By the way – that’s another thing I learned about Canada. Okay I kind of already KNEW they liked their beer up here, eh? However there are breweries and microbreweries everywhere. This place is a beer lovers heaven – unless of course you’re a poor beer lover!

Since I’m on this "what I learned in Canada thing" here’s something else I learned. They like their maple syrup here. I should have known that since the darn leaf is on their flag. However, they’ll do about anything with maple syrup INCLUDING charging you $2.50 to hand you an oversized popsicle (just the stick with nothing on it) and then take you outside where they’ll pour a strip of maple syrup onto a barrel filled with packed snow. They tell you to wait 45 seconds, and then you spin the strip of now frozen maple syrup onto the stick.

I enjoyed it…really I did…but then I kind thought how stupid I was because I’ve gotten the same sensation from tipping the Aunt Jemima syrup bottle in my refrigerator straight up and into my mouth. YES – I admit I’ve done that and you probably have as well!

That’s it for Tuesday. As I am preparing to head out skiing some First Tracks Wednesday morning it is snowing! Woohoo…