Welp, March has “come in like a lamb, and out like a . . . lamb”. Most, if not all, areas have not seen measurable snowfall during the month of March. Even In the snowy capital of the southeast (Canaan Valley, WV), that zone has only seen ‘Trace’ snowfall, this month. On March 20th, David Lesher of Canaan Mountain Snowfall wrote, “As of today, there still hasn’t been any measurable snow so far this month, unprecedented for any March since snowfall records commenced here in 2001.” To date, Lesher’s weather station has seen 111.7″ this year.

Snowshoe, the second snowiest place in the region has followed suit. 103.5″ of snow has fallen this season atop of Cheat Mountain. Both places typically average over 150″ of snow a year.

Despite this, I went for one last trip to the Mountain State, to cap off the year.

What does a ski resort look like after it closes for the year? Typically the staff take a much needed break as many of the employees have been working tirelessly, for months on end. The misconception (in the southeast) is that the resorts close because all the snow has melted. In fact, in a good year, many ski areas can cut-off the snowguns in mid-to-late February. Most resorts close because skier visits plummet deep into March.

Winterplace, the ‘most accessible resort’ in the region, was en-route to Snowshoe. The resort had closed, but some of my buddies mentioned of their, similar, post-season adventure at Winterplace.

A couple of the runs were actually groomed, which made it feel like a private ski resort! Canaan Valley State Park also allows uphill access on all of their runs, post-season.

After a couple of laps up-‘n’-down at Winterplace, I was buzzed . . . got back in the truck, and kept on going  north, to Snowshoe.

It goes without saying that Snowshoe has some of the best lift-served terrain in the region. In fact, the ‘Shoe is the only resort in the region to have a snow guarantee and “the most skiable acreage open versus any one of the Southeast US ski area options”. If you purchased a lift ticket and they don’t live up to this promise, you get a free voucher for any another date within the season.

But, did you know that Snowshoe has a whole network of backcountry trails? I woke up to a chilly morning 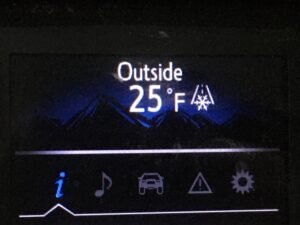 and went for a trail-run on the “Powder Puff” trail. Powder Puff is an (easy – green circle) 1.2mile out-and-back trail, which was a great way to stretch the legs from sleeping in the back of the truck. I always like a warm-up before a ski-day, and this was the ticket. 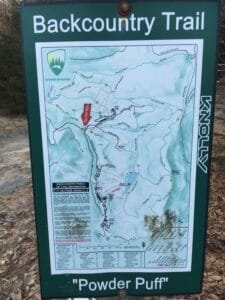 When there is enough natural snowfall, these trails are a open to cross-country skiing, fat-biking, etc.!

I discovered that I didn’t bring my GoPro which was a bummer, because I wanted to get some great footage of Snowshoe downhill. I ended up going ‘Old School’ and used some duct tape on a ski pole with an iPhone 6. It didn’t turn out as I hoped . . . but believe you me, it was some glorious corn snow conditions.

I started at rope-drop in the Basin where the surface was nice and firm for a great rip on skis. I always like starting on the skis where I can get good grip with two edges 😉  . . . Skip Jack, Ball hooter, Grab Hammer are all good places to begin as an intermediate skier.

Around 10am, I moved to the Western Territory where the famous Cupp Run and Shay’s Revenge were really shaping up nicely. Lower Shay’s had it’s share of bumps which is always super challenging and fun. I went over to Silver Creek in the afternoon, and the crowds were nil’.

There’s a reason why Snowshoe is the “Beast of the (South)East” . . . one of my top days this year, and I wasn’t slack on days.

This upcoming Saturday/Sunday could be the last (un)official weekend of the 2020-2021 season. I am saying (un)official because a couple of resorts have not announced a closing date, yet. The two that I’m aware of are Sugar Mountain and Cataloochee. Both places have had great years, and these last days are ‘icing on the cake’. The question is how thick do they want the icing to be? Let’s take a look at the base depths of these two spots:

If either resorts make it to Easter weekend, I’ll be there!

This upcoming weekend is the Meltdown Games at Appalachian Ski Mountain. I’m really trying to support these ‘festive’ end of the year events, this year. Last year, most (if not all) of these events were cancelled. I have to work on Saturday, but I am going to try and make it on Sunday. Here is a rundown of the events:

All three of these events sound fun, and I’ll definitely be signing up for the trifecta! See ya there, and stay stoked!