Make History On Your Next Southern Ski Trip 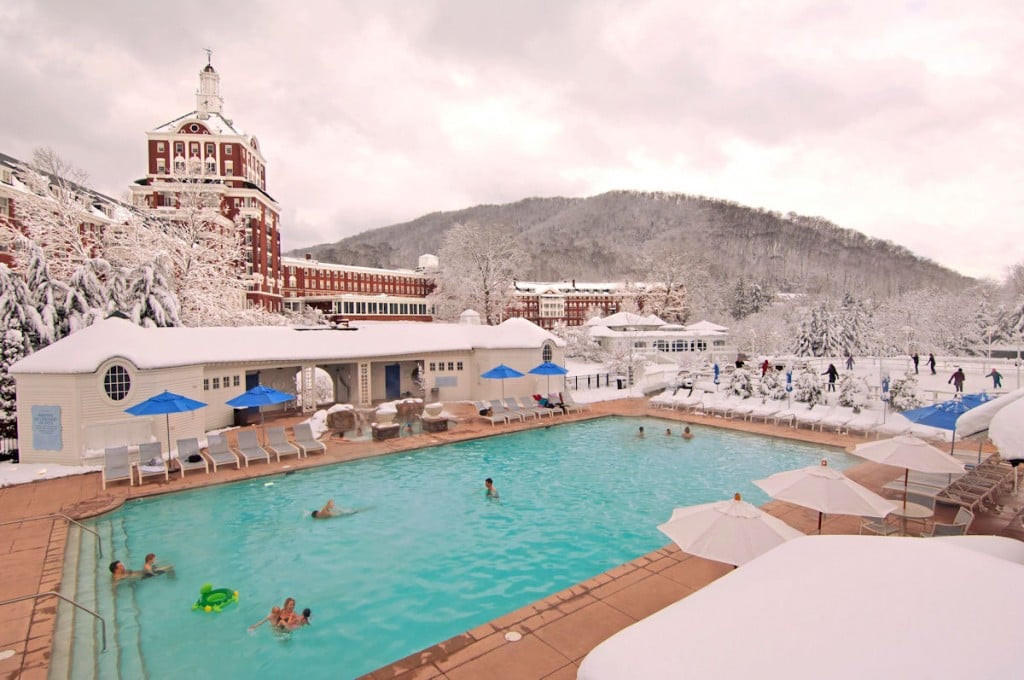 Even just a machine-made white Christmas creates priceless atmosphere. But holidays or not—snow or no!—it’s easy to amp up any ski trip experience if the South’s most historic ski digs are your destination. Historic Southern ski hotels are set to be hot this winter.

The Motel 6 or a concrete bunker beside the road might be OK, but Southern skiing is crossing the fifty-year mark and many of the region’s ski destinations have been resort areas for way more than a century.

Lucky too, over the last twenty or so years, the Trust for Historic Preservation has rounded up a classic collection of places to stay called the Historic Hotels of America. You’d be surprised how many of these properties are located in Southern ski country.

Bottom line—these Southern ski lodging sites equal the coolest places skiers check in to up North and Out West. All you need to do is aim a little higher. For a few of these locations, 2016 is a landmark year to make some history. A stay won’t be cheap,  but it won’t be ordinary either.

Here’s a few to sample at any time of the ski season.

Blowing Rock’s Green Park Inn is a landmark from the early days of mountain tourism. In 2016 it’s celebrating 125 years, and its just minutes from Appalachian Ski Mountain. 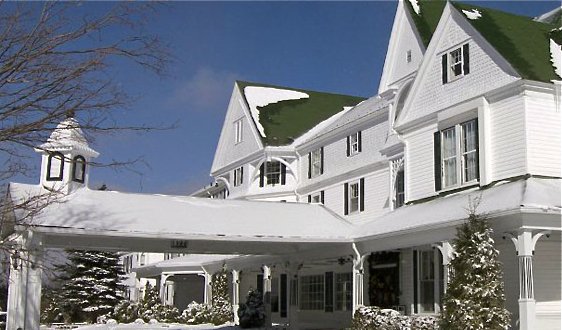 At a recent annual meeting of the Historic Hotels of America the Green Park Inn was honored with the organization’s 2015 Best Small Hotel Award for properties with under 80 rooms. The award said the hotel’s refurbished rooms, great atmosphere and dining “represents the pinnacle in historic hotel achievements.”

Green Park was also recognized for its upcoming 125th Anniversary celebration, scheduled for June, 2016, and it received a Best Practices in Creative Historic Marketing and Promotions Award for its efforts to attract the cultural and historic traveler.

The Green Park is a little smaller than another Historic Hotel of America, the Omni Mount Washington Resort in Bretton Woods, New Hampshire, but New England skiers looking out at Mount Washington have a very similar experience to that found at the Green Park. The Green Park’s Divide Lounge (on the Eastern Continental Divide) is a great after-ski watering hole and on weekends, Charlie Ellis brings his popular piano jazz to the lobby. All of Blowing Rock’s other options are close by.

Check out Appalachian Ski Mountain’s “Ski and Stay” packages for lift tickets and great rates at the Green Park.

If you’ve ever skied Killington and been lucky enough to stay at The Vermont Inn near Rutland, get luckier and make Valle Crucis your base for skiing at nearby Beech and Sugar Mountains.

The snowy Mast Farm is a welcome sight for skiers in Valle Crucis. This pristine B&B is second-to-none in ski country. Photo by Randy Johnson

The classic, immaculate 1880s Mast Farm Inn was an inn a hundred years ago! Its log cabins and quaint guest houses date back to the 1790s when settlement of the Grandfather mountain area was barely underway. This landmark of North Carolina’s first rural National Historic District is known for gourmet food. The Mast Farm’s chef also works his magic at nearby Down Yonder, another great eatery not far away, beside the Mast General Store.

Put all this together and you have a truly historic take on a High Country ski experience. Better yet, the Inn has special discounted winter weekend rates that include gourmet specialty meals to benefit local non-profits. 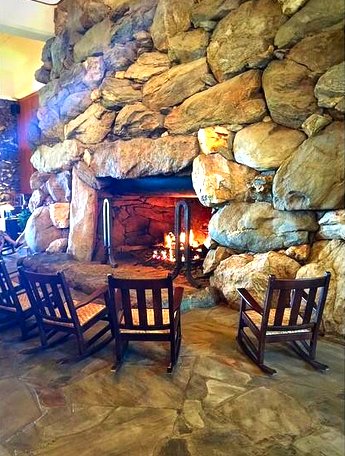 The Grove Park Inn’s lobby bar and fireplace is as memorable a place as exists to toast the day’s skiing. Photo courtesy Grove Park Inn

The 1913 Omni Grove Park Inn’s amazing stone lobby is worth the price of a room just to wander downstairs and sip an apres-ski drink in front of a fireplace that’s worthy of Biltmore Estate. (You don’t have to stay here to enjoy the lobby bar, but it’s nice to feel at home. And the spa is one of the country’s best. Its bubbling, cascading underground grotto of pools is a rejuvenation hot spot for slope-sore muscles.

Right downtown,  the Haywood Park Hotel is as close to the city’s dining and drinking spots as you can get. Just down the street from the Grove Arcade, and pubs like The Thirsty Monk and Jack of the Wood, the Haywood Park is also only few blocks from that interstate to Wolf Ridge.

The Homestead (now also an Omni hotel) leads the region’s list of historic hotels, skiing or not. The resort’s 250 anniversary happens in 2016, giving it claim to being not only the first ski resort in the South but the nation’s first resort. Yes, Thomas Jefferson was hanging on a rope in the resort’s still functioning 18th century hot springs! 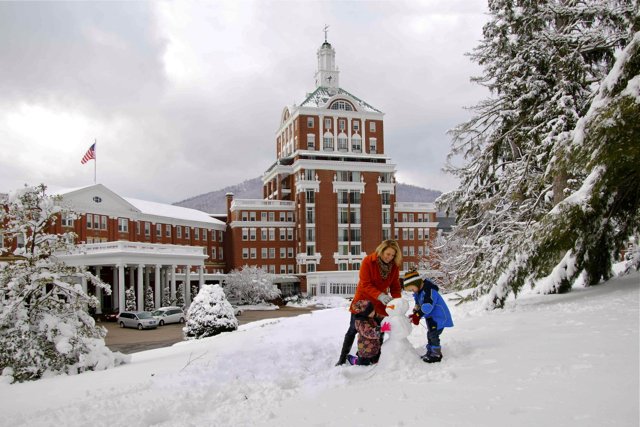 2016 celebrates the 250th anniversary of the South’s first ski area to add “resort” to its title. Photo courtesy The Homestead

Nevertheless, times have changed. The resort’s new Allegheny Springs water park is a highlight. There’s ice skating, and the pool and whirlpools are fed by the resort’s mineral-rich spa waters. Grab a hot chocolate and more at the grill. Skiing, boarding, and tubing are as close as The Homestead’s classic ski area.

The Homestead doesn’t have the region’s hairiest black diamond runs, but it’s a perfect family experience with winter “learn to ski” packages that make a classy experience much more accessible than you think.

Like many of you, I count noteworthy Southern ski trips among my favorite memories in a ski life well lived. One of those, a trip to the Homestead, still ranks at the top, not only because it happened here at home, but it set the stage for an appreciation of just how good we have it skiing in Dixie.

Back in the 1980’s, as a fledgling ski writer, I had the honor to meet Sepp Kober, the man who brought skiing to The Homestead. To this day, the late Austrian immigrant is the only Southerner in the National Ski Hall of Fame, a stellar example of the role Europeans have played in skiing all over the United States. 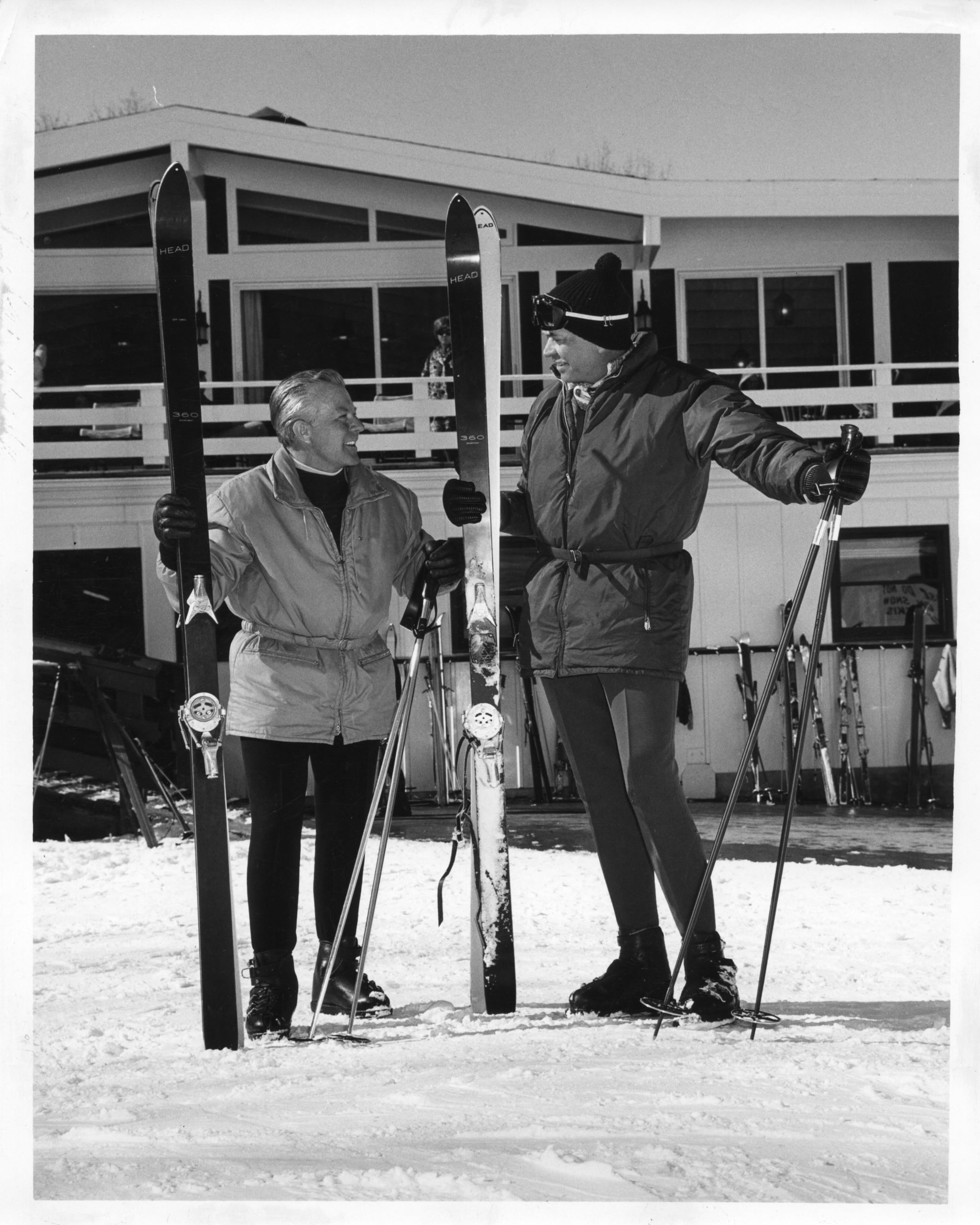 That was my first trip to The Homestead. I strode into the grand dining room that day for breakfast with the grand old man of Southern skiing. He put down his newspaper, stood and shook my hand, and in an instant, his European accent and the palace hotel setting transported me to the realization that this man belonged here, even though I didn’t quite know why.

I found out later. In a few years, as I photographed European ski resorts for SKI Magazine, and wrote about the great ski and spa hotels of Austria and Switzerland for newspapers around the country, I saw the grandeur and sophistication of The Homestead reflected in so many places, towns with names like Gstaad, Zermatt, Badgastein.

Like a great country inn in Vermont, a classy hundred year old hotel in New Hampshire, or a rustically elegant hotel in a Rocky Mountain ski town—those kinds of memories can be yours right here in the South. Just pick the right place to hang your helmet.

The Historic Hotels of America website is a great place to start. Think snow.

Today is Going to Be A Spring Preview

When the Passion is Lit

Beautiful Tuesday On The Way