It’s Like a War Room” at the Resorts Right Now… 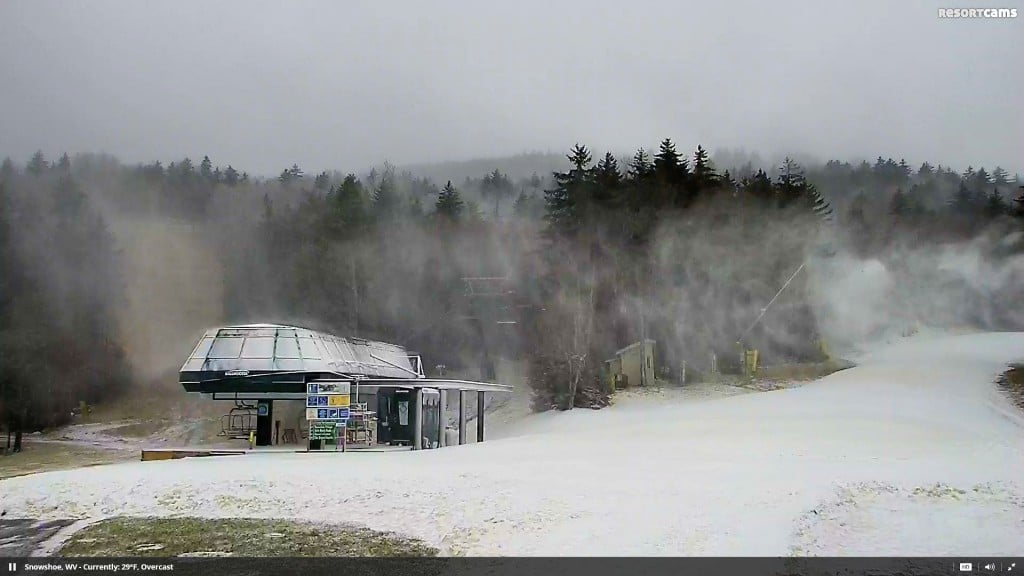 For the resorts that are making snow, it is like a war room in the various operation centers as I know the Ops Managers and snowmakers are looking over their enlarged trail maps deciding where best to place the artillery (snowguns) to get as much open as possible in the next 60 hours.

For the resorts that have spent millions of dollars in snowmaking upgrades, this is when it pays off as “No Snow means No Visitors”.

Good news for WV Ski Resorts – as of 12:30 pm today there are over 700 snow guns going from Winterplace in Raleigh County, to Snowshoe in Pocahontas to Canaan Valley and Timberline in Tucker County as the resort’s snowmakers are taking advantage of every single second of subfreezing temperatures to make snow and create a fun on-slope experience for visitors headed to the West Virginia mountains looking for a White Christmas.

It Has Begun to Snow as Well!

It has started snowing in the mountains with the first reported flakes occurring in Tucker county around 9 am this morning and is now (12:30 pm) snowing in Tucker, Pocahontas and Raleigh counties where the resorts are located.  Most importantly, the snow is falling in the metro areas making people think about winter, as least for the time being.

The snowmakers at all of the state’s ski resorts can produce manmade snow whenever temperatures permit, allowing the industry’s unsung heroes to cover the slopes for skiers and snowboarders.  When snowmaking conditions are at their best (in the teens, which are in the forecast tonight), over 20,000 tons of snow is being produced in West Virginia per hour, enough snow to cover 20 football fields with a foot of snow each hour.

There will be skiing and snowboarding and maybe some snowtubing this holiday season, but it is also about creating memories as all of the resorts are adding other activities like live outdoor music, 5k races, Snowshoe and Canaan Valley are looking to open their golf courses, outdoor cookouts.  Again it’s all about getting away and creating memories with your family and friends.

Officials at the resorts I spoke to this morning say Snowshoe and Canaan Valley will be skiing and snowboarding on Saturday (tomorrow), Winterplace (hopefully) and Timberline will come on line Monday.

Previous Post
That Sound You Hear Roaring Through the Mountains is Not a Train!
Next Post
Make History On Your Next Southern Ski Trip

What a Wild Weather Ride in the Last 24 Hours!

Snowshoe and Ober Gatlinburg Kicking Off the Season