We left at around 8am Saturday morning from Cary, NC. Road conditions were perfect, and it didn’t even start snowing until WV even though there was no accumulation on the roads the entire trip.

We parked 2 rows from the doors which was awesome, not super busy. We rented helmets, grabbed lift tickets and headed for the lift. 1st stop was the Green run all the way to the right. I fell a lot, conditions weren’t nearly as good as they were at WG after they got 30" last month. After an hour of that we went inside to warm up, it was COLD. Winds were blowing a bit. We checked our gear for a quarter each which is a GREAT service, more slopes need to provide this option especially with all the thefts lately.

The food wasn’t bad either. I got the BBQ sandwich and Kim had a hot dog and curly fries. My sandwich was excellent. For some reason it wasn’t very warm inside, we were both cold just sitting there while not moving around.

Back out, we checked out the bunny slopes for my brother when he comes in Feb. I was disappointed. They were secluded which was good, but they were almost flat. Both Kim and I couldn’t gain any speed without unstrapping and skating, so I don’t know how it could be good for beginners (on a snowboard at least, skiers can pole around). Maybe the far hill was steeper, but I wasn’t really happy about it.

Went up to the top to try out Ridge Runner. Another disappointment, but mostly due to our level. The run is very narrow with a dropoff on the left side and no barrier to keep you from going down the mountain. I was nervous as hell and kept the board pointed to the right since I’m not as good going from a left to a right turn. My lower leg cramped up bad and I had to walk it off to ride again. It’s pretty flat, but with the narrowness and no barriers I don’t think it should be a green run. It would be a lot of fun for someone who can link turns in a narrow space or a skier at almost any level. We couldn’t find the connecting green run so we had to go down the blue run which was wider and we both did very well on that run for some reason. The runs were either not labeled at all or terribly labeled to where we were lost most of the time. Most runs they’ll put the run markers AFTER the turn for the run so you can’t see it until you’ve passed the turn. If the signs weren’t minuscule it wouldn’t be a problem, but add to that snow and other people zipping by and it’s frustrating. Kim did a cartwheel on that blue and my hip cramped up so we called it a day. I’m in terrible shape hence all the cramps, but it was another day on the snow so we were happy. Wind wasn’t bad at all, almost calm for the majority of the day.

About a mile after leaving we were stuck behind an accident that had just occurred and we were stuck there for over an hour which made a long drive even longer. I’m not sure where I’ll take my brother now since we were doing WP to use the stay and ski free deals they have with the local hotels, but I might pay a bit more to go to WG or elsewhere depending on conditions and deals we can get. We’re going out on a Wed morning and coming back Saturday evening. 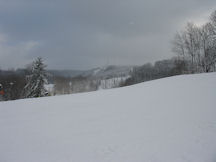 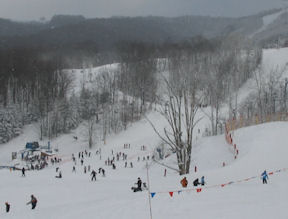