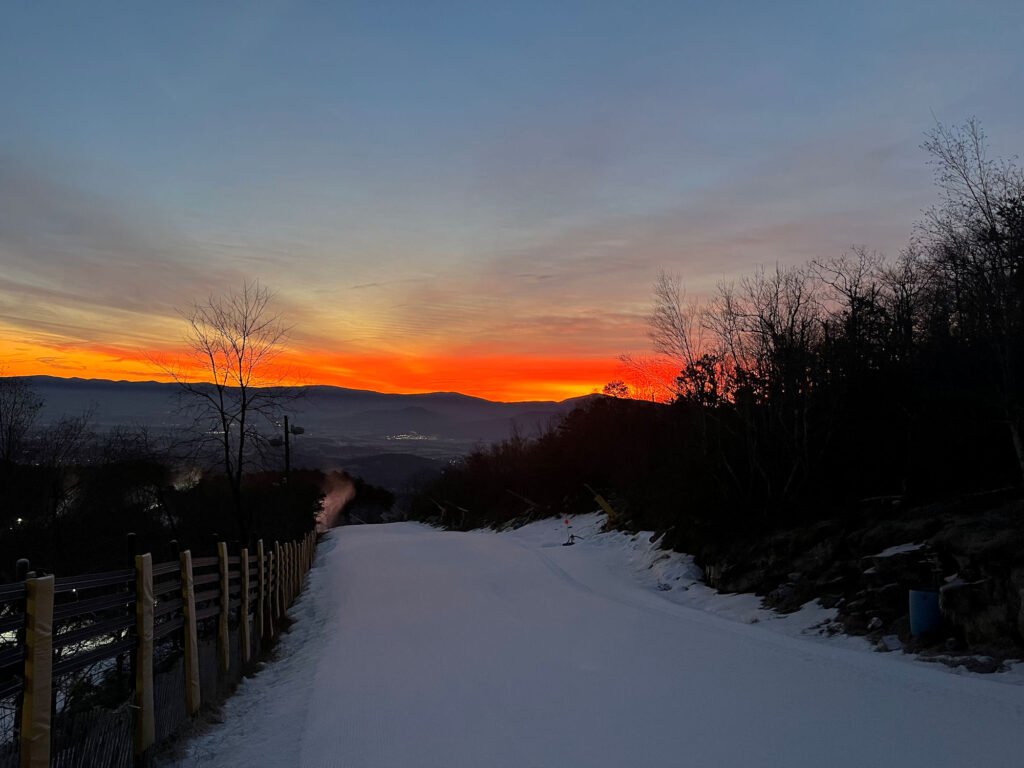 Check the SNOW REPORT for full details. Today’s ramble is about current conditions and what the prospects are for a nice week and MLK Weekend ahead. On Saturday, I DID tease that I’d be sharing the natural snowfall totals for the season – or the lack of it – however, I received a LOT of inquiries about conditions for the upcoming MLK Weekend so I figured I’d provide some indepth coverage for that and address the lack of natural snowfall next week.

The POD (Photo of the Day) above is courtesy of Kenny Hess from Massanutten Resort. Kenny was up and at ’em EARLY this morning as he caught this photo and emailed it to me, calling it “The Nutt at Sunrise”

Here is a quick summary of what you can expect if you wish to ski or ride today across the Southeast and mid-Atlantic.

Things look really good no matter where you choose to ski or ride in the region as long as you’re not thinking of playing at Wolf Ridge Resort or Sapphire Valley Resort in North Carolina. Sapphire is temporarily closed and to be honest, Wolf might should be. Man, they TRY to make the best with what they’ve got…but they’ve not had but one real, trail open down the mountain all season (Broadway and Eagle – both greens).

As for the rest of the resorts in the region, the overall summary would read something like this:

While all of the ski areas have had no trouble keeping most of their mountain open over the last couple of weeks, they were happy to see a short, snowmaking window open up Friday into Saturday. That allowed for most ski areas to make 4-6″ of manmade snow across core trails. They should be in good shape through this week and entering into next weekend’s MLK crowds.

Maryland’s Wisp Resort
While they’ve never gotten the majority of the mountain open at any point in this season, they’ve done a nice job of keeping their core trails open and well covered. If you check out the LIVE CAMS there, you’ll note that they look a lot more wintry than most and they are in good shape heading into the next week’s MLK crowds. At 22° this morning – they made a ton of snow and will continue as long as temps allow.

We are sharing the West Virginia mountains next for multiple reasons. One – they have almost double the terrain of the NC ski areas open this morning (92 trails, compared to 51). They’ve also had 15-19″ of natural snow, compared to NC’s 1-5″ of snowfall. More slopes, more snow and colder temperatures, simply means the better of the conditions in the region. It IS what it IS.

Timberline Mountain has been 100% quite a bit this season and remains with everything open today with the lone, half-trail of Upper Almost Heaven. Snowshoe Mountain leads the region with 44 trails available and it is simply “By God Beautiful” in West Virginia this morning and they look in great shape for the MLK weekend.

Resorts not named Wolf or Sapphire have 51 of 59 slopes open as of this morning. That leads the entire Southeast and mid-Atlantic with 86% of their mountains open. The “big four” resorts of Appalachian (12 of 13 trails), Beech (14 of 17 trails), Cataloochee (10 of 18 trails) and Sugar (15 of 21 trails) ALL look really nice. All made TONS of snow during the last ice-age, cold front around Christmas, and they all made snow again over the last 48 hours.

However, as you can see below, the NC ski mountains are pretty significantly warmer this morning than their northern brothers and sister resorts and therefore NO snowmaking is ongoing this morning.

Regardless, simply check out the LIVE CAMS and you’ll see how awesome the BIG FOUR look this morning. There IS a chance for some additional snowmaking temperatures AND natural snowfall all next weekend, so the setup is AWESOME for the MLK weekend crowd.

Perhaps the best QUALITY of snow in the region is at Appalachian Ski Mountain right now. Deep, side-to-side coverage and plenty of terrain open. Check out the photo below AND the LIVE SKI CAMERAS. I had fun watching a group of snowboarders hit the terrain park.

Bryce Resort is 100% open, Massanutten Resort is playing on 14 of 23 slopes today, Omni Homestead is open on 4 of 9 trails and Wintergreen Resort is open with 10 of 27 slopes and trails. The morning temperatures are posted below and as you can see, ALL are making snow this morning and will be as long as temps allow.

The Virginia ski areas have really done an amazing job making snow and maintaining some semblance of winter, despite long windows of not-so-wintry weather. However, right now they look pretty good and should be in nice shape to make it through the MLK weekend. Like all season long, the low temperatures for the week ahead are very borderline as to whether or not they will be able to make more snow until perhaps the 14th or so.

The popular Smoky Mountain, Gatlinburg, Tennessee ski area has SO much going for it. You can take a ride in an aerial tram from the downtown shops and restaurants up to the mountain top. You can ice skate indoors and they have a couple of coasters, snow tubing (even at 60°) and there are ten slopes and trails to ski on – when the weather delivers natural snowfall or temperatures that are cold enough to make snow. New owner, local entreprenuer, Joe Baker may have to invent a way to manufacturer snow across the ski slopes like they can currently do on the snow tubing hill if they are going to make it as a ski area. It seems like ages since Ober has had more than five or six slopes open.

Ober has so much going for it, if Mr. Baker can figure that one out they’d have the best of everything. Maybe something like the Liberty Mountain Snowplex Centre in Virginia? Maybe a mix of Ober’s SnowMagic machines and Snowplex? I know they can currently make 200 tons of snow per day for the Snowtubing hill.

It is 48° there this morning and we’re not seeing any snowmaking temps in sight for at least a week. So Ober will have what they have right now…IF they can maintain it. They ARE open with 5 slopes today!

Snowshoe Mountain
Snow showers are expected to ramp up this afternoon. The forecast is calling for 2-3″ of snow by tomorrow morning – could be a pow night at Silver Creek! Snowmaking is in progress on Camp 99, J-Hook, Evolution Park, and Lower Shay’s Revenge. Stay tuned for updates on our progress.

SPEAKING OR NOT SPEAKING OF SNOW…

I know Meteorologist, Brad Panovich teased a significant snowfall event perhaps coming in NEXT week and weekend. There was even some trend-mapping that showed a chance for one of the more impressive snow events in a while. We will leave it to Brad to explain and inform us, but unless I am missing something – those chances have greatly diminished, if all but disappeared. We are seeing 1-3″ of snowfall for Snowshoe, Canaan and Timberline for today and this evening and maybe 1-3″ of snowfall for the Western North Carolina mountains (as well as the entire region) MAYBE next Friday and Saturday. THAT should make for some nice, ambience snowfall for the MLK travelers, but I don’t THINK we’re going to see any deeper snows.

The GOOD news is, our resorts are the best in the entire WORLD at making and maintaining snow on the slopes for our enjoyment. There’s plenty of good terrain to enjoy for today through the week or ten days ahead. After that, we can hope for another, well-timed blast of cold air or the FIRST significant snowfall of the season.

Check the SNOW REPORT this morning for full details.

Previous Post
LIGHT SNOW FLURRIES AT BEECH MOUNTAIN THIS MORNING; COULD WE SEE A BIG SNOW EVENT FOR MLK WEEKEND!?!?
Next Post
THE BULLPEN IS ALWAYS WARMING UP