LIGHT SNOW FLURRIES AT BEECH MOUNTAIN THIS MORNING; COULD WE SEE A BIG SNOW EVENT FOR MLK WEEKEND!?!? 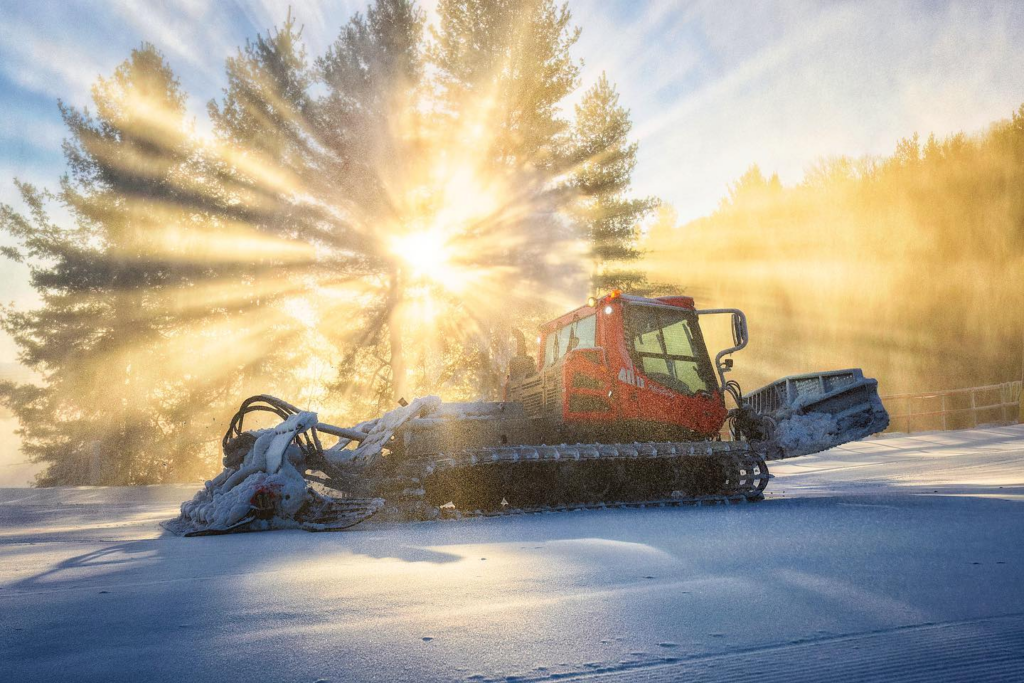 I want to jump in right off the bat and mention a couple of things. First, the title of today’s FirsTrax report was not meant as ‘clickbait’ as we were seeing flurries on Beech and actually a couple of the other LIVE cams around the region.

The Photo of the Day is from Cataloochee Ski Area. Thanks Chris!

Second, Meteorologist, Brad Panovich released his latest Skier’s Forecast video yesterday and he does tease at some chances of a significant snow event for NEXT weekend. That IS still a week away and as Brad himself tells us “a lot could change between now and next weekend”, BUT – there he’s saying there’s a chance.

Check out that video below, however, HERE is a capture from Brad’s video showing the snow setup for NEXT weekend!

We haven’t seen anything like that in a while!

I typically make Sunday my day to post random, unorganized thoughts, but I ran across a number of things to share, so here we go. (By the way, I still plan on sharing some rambles on Sunday per the “snowless season” we’re experiencing to date.

Our own Brad Panovich and family are hanging out at Winterplace Resort today. Hopefully we can get some photos or vids from up there. Winterplace’s Josh Faber and Tom Wagner are hosting a media weekend. Yours truly was meant to be there, but I am dealing with a bit of a health issue and doing my skiing “virtually” this weekend. I know those guys will make Winterplace the place to be today!

NOT SALTY PODCAST IS PRETTY AWESOME 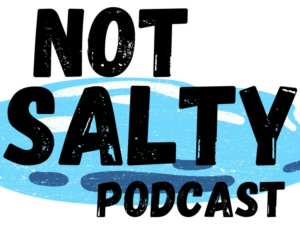 We’ve been talking about doing a PODCAST for all things skiing and snowboarding in the Southeast & mid-Atlantic for perhaps three years now. So far, it’s been all talk…but not on the air!

My new, good friends, Jon Bell, Mike Fenton and Kristin Skeweris have started a great podcast called Not Salty. For several seasons now – I have been telling our readers about what a special place Wisp, Deep Creek Lake, Garrett County and McHenry, Maryland is. Wisp is a bit more of a trek for many of our readers (not located near Washington D.C.), but it is a trek well worth it.

Well NOW you guys have another resource, other than myself, to inform you about “all things Deep Creek Lake”. The Not Salty crew features Railey Realty co-owner and agent Jon Bell, agent Mike Fenton, and Marketing Director & Associate Broker Kristin Skeweris.

The trio launched their podcast in late November and drop new episodes every Friday. The episodes are streaming everywhere you normally find podcast, like Audible, Apple Podcasts, and Spotify, as well as full-length video versions on YouTube. You can find them on all social platforms @notsaltypodcast.

…and me. (That latest podcast episode with your’s truly has not been posted just yet, but when they do, you can catch up on the casual conversation between myself and these three, talented and sharp individuals.)

Here’s the link on Spotify

Editor’s Note: Jon and Kristen are snow-loving souls and Kristin makes it a point to get on the snow once a week. She and I connected recently trying to get the Railey Realty / ResortCams LIVE stream back up (and they NOW have a new system). We instantly hit it off and she’s been texting some photos/videos on occasion. We’ll be sure to share those and more.

I enjoyed the time spent with the Not Salty bunch the other evening as I always love speaking with people who are passionate about what they do. You could feel their real love for the area, the industry they’ve chosen to carve out a living doing (real estate) AND their newfound passion for talking about it all on the air.

I HIGHLY RECOMMEND checking them out, and making it a point to visit Wisp this season! If you DO make the trek, check out Railey Vacations at https://www.deepcreek.com/ and like many, when you fall in love with the place and want to purchase your own piece of heaven, check out Railey Realty.

WE’VE WEATHERED THE POST NEW YEAR’S MILD UP AND RAINS…NOW WHAT?

One tour of all of the LIVE SKI CAMS will attest to the fact that the slopes of many of the resorts have been narrowing. Heck, Sapphire Valley Resort closed and Wolf Ridge probably should be. However, the REST of the ski resorts in our region weathered things quite well and after a short window of making snow over the last 24-36 hours – most look pretty good again.

The NEXT big, important weekend to the ski areas (in terms of skier visits and revenue generating) is the upcoming MLK weekend – which is NEXT Friday-Monday (January 13-16) and the forecast looks VERY favorable. Right now, it appears that we should see some snowmaking temperatures (especially overnight) on a few of the days ahead AND some natural snowfall chances on Monday of this week…and then, if Brad’s forecast holds…we could see some GREAT snow NEXT WEEKEND!

It has been a relatively “snow-less” season thus far as Beech Mountain and Sugar are perhaps 40″ below normal for this time of year as they have each only received 5″ of snowfall. Snowshoe, Canaan and Timberline would normally have already received a few feet of snow and they are holding at 18-19″ on the season. Other ski areas have only seen a TRACE of snow thus far. We will feature a report on that tomorrow (Sunday). So be sure to check that out.

However, there’s a setup taking place out west and north that may form perfectly to deliver some “catch up” snowfall and we’ll talk more about that in the coming days.

Smithsonian Magazine credits Louis Geib with inventing the first snowmaking machine. His invention—the first known snowmaking machine—consisted of three rotating blades that shaved ice from a 400-pound block and a high-powered fan that blew the resulting particles into the air.

Mohawk Mountain in Connecticut claims to have been the first. However, we’d lean towards Art Hunt, Dave Richey, and Wayne Pierce invented the snow cannon in 1950, but secured a patent sometime later. In 1952, Grossinger’s Catskill Resort Hotel became the first in the world to use manmade snow. Snowmaking began to be used extensively in the early 1970s.

…and we’re giving a HEAVY ATTABOY to Louis, Mohawk and whoever else wants to lay claim to the invention of the snowmaker, as without it, every ski area in the region would be offering chairlift rides over grassy knolls this season.

Thankfully, several ski areas made snow again last night and early this morning. The humidity was a little too high for optimal snowmaking at most of the resorts. Snowmaking might continue for a few hours during operating hours on Saturday, then may resume Saturday evening and into Sunday morning. 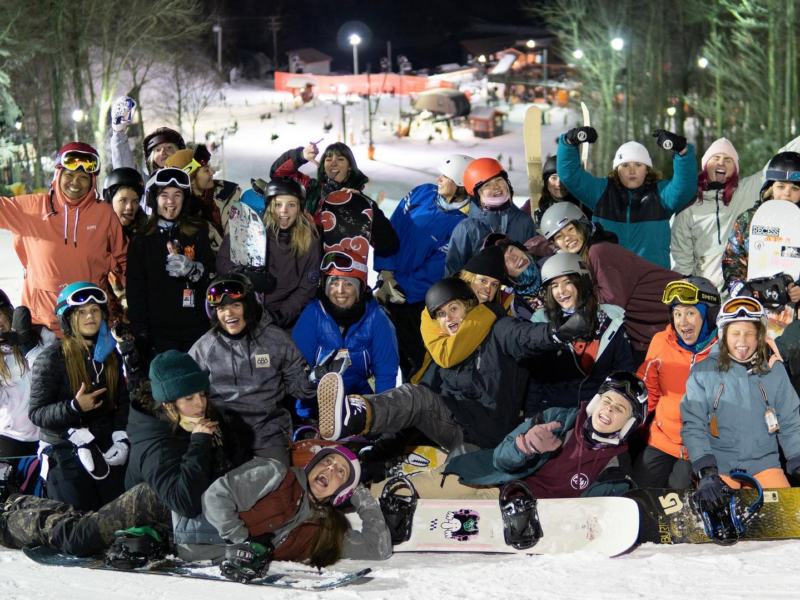 Join App Terrain Park & Alpine Ski Shop for a special session Saturday Night, January 7. Registration will be from 5-6:30 in the Alpine Ski Shop, and the event will begin at 7pm.

App Terrain Park’s Ladies Park sessions highlight a custom terrain park area with features specifically designed for learning and progression that will be open to ladies only. Trick tip coaches are on hand for the event to offer advice if needed.

This event is free with purchase of a ski ticket and open to women of all age, ability, both ski and snowboard. 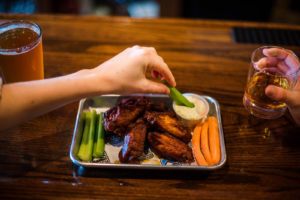 Beech Mountain Resort reminds us that there’s more to do than just skiing and snowboarding at the resorts.

Beech Mountain Brewing Company’s best-kept secret is open.
Join us every Saturday and Sunday from 5 p.m. to 10 p.m. in the Red Baron Room.

Choose from their specialty bourbon selection, play a game of pool, or grab a bite to eat from the Taproom and Grill.

The Red Baron room offers an intimate setting with an original 1917 French-style bar and oak flooring.

We have to get them to share their videos horizontally…but

A staff member captured this beautiful moment on their ice rink yesterday. Congratulations to Logan Schmitt and Sydnee Lotsey. We wish you all the best on this new chapter of your lives. 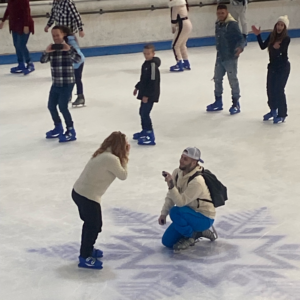 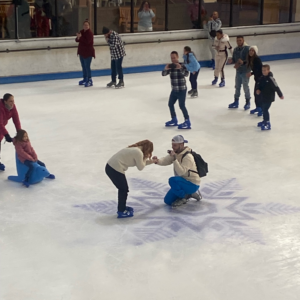 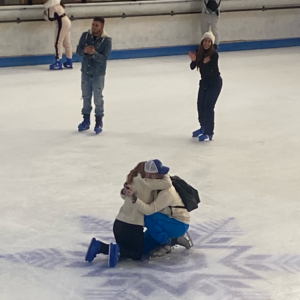 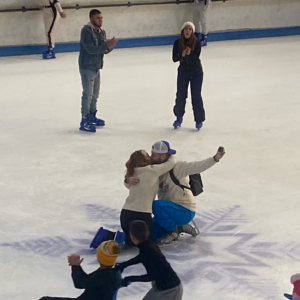