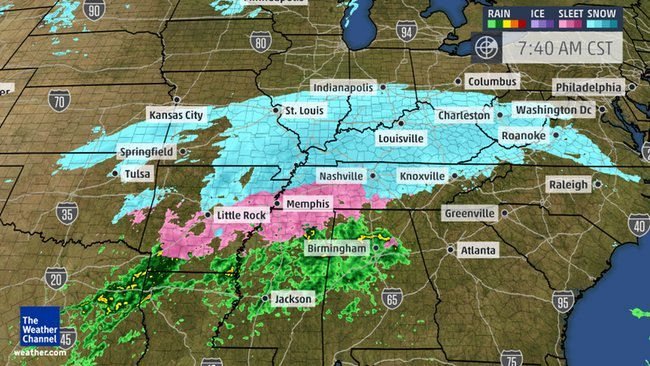 Not sure if I have EVER seen WINTER STORM WARNINGS posted for EVERY SINGLE SKI AREA LOCATION in the Southeast & mid-Atlantic. Up to a FOOT OF SNOW is forecasted for some of our coverage area and even Sapphire Valley Resort is expected to see perhaps an inch or two of frozen precip.

If you visited the mountains for the President’s Day Weekend, THIS ONE had to be a SPECIAL ONE to remember. 3-9″ of snow fell across the region on Saturday – making for a memorable day for visitors to the ski mountains. Then Sunday was one of those “chamber of commerce” kind of days with brilliant sunshine and cold temps.

…and now TODAY, President’s Day Monday, we will see from the aforementioned 1-2″ of wintry mix around Sapphire Valley…to 4-6″ of snowfall at Beech Mountain & Sugar, to 2-4″ at Ober Gatlinburg, to 8-12″ around Winterplace, Canaan Valley and Timberline resorts. 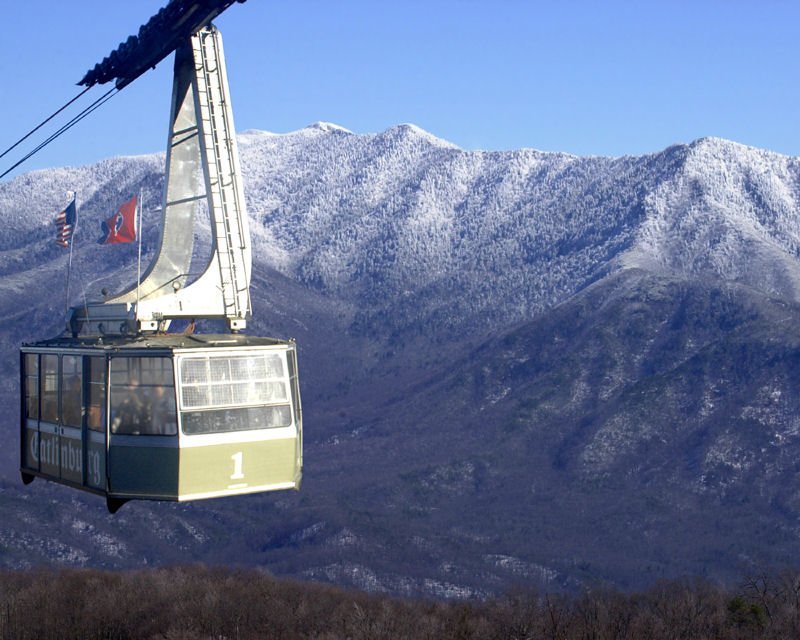 SUM UP TODAY with a post from Ober Gatlinburg this morning. They recommend, “Avoid driving and take the Aerial Tram to the slopes today!”

Ober is the only ski area in the Southeast and mid-Atlantic where you CAN get to the slopes without the benefit of a vehicle. From downtown Gatlinburg you CAN walk to the tram from your hotel and all of the awesome shops – to the aerial tram station – and take an amazing and scenic tram to the top.

A lot of the ski areas will not be offering NIGHT SESSIONS on this President’s Day Monday. Check the FULL SNOW REPORT for those resorts that WILL be open.

It’s a fair bit COLDER into Virginia than it is in the North Carolina mountains – which is unusual. Case in point is Massanutten’s 3° and Wisp Resort’s (Maryland) MINUS 9° compared to Beech’s 10° reading at 8am.

That COULD be an indicator of the front that is moving in bringing all of the precip. Beech and the NC Mountains are expected to see snow and sleet beginning at around 10am or so, whereas some of the mountains further north are not expecting it until later in the afternoon.

Speaking of the snow moving in – we’re seeing forecasts all over the place. The NWS out of Blacksburg, Virginia is forecasting up to 12″ of snow for Omni Homestead in Virginia. THAT would be more snow than they’ve seen ALL SEASON TO DATE. So far on the 2014-2015 season, The Homestead has had 9″ of snow and they could more than DOUBLE their snowfall to date today.

On the other hand, the NWS is forecasting only 2-3″ of snow around Wolf Ridge Resort; 1-2″ around Cataloochee; 4-6″ around Banner Elk…and 3-7″ of snow is forecasted for Snowshoe.

Speaking of Snowshoe – they are the closest they’ve been ALL SEASON TO DATE to being 100% open. They are now playing on 59 of their 60 trails with only the Silvercreek side’s “Flying Eagle Glades” as not open.

Lenora Testerman of Canaan Valley wrote me this morning, “Another snow system moving into the area later today should produce 8-10”+ of fresh powder. Make your plans to join us this week or upcoming weekend to take advantage of the best skiing of the season.”

Bear in mind that they are currently holding their $199 OUTRAGEOUS, TOTALLY INCREDIBLE, AMAZING, CRAZY, WONDERFUL PASS sale right now. $199 for a lift pass IS awesome and it’s good from RIGHT NOW all through the 2015-2016 season too.

As mentioned – Snowshoe is not being super secretive about being secretive about the fact that they MIGHT, MAY BE releasing some “RIDICULOUS” news of their own – tomorrow. Okay, Girl and Boy Scouts…BE PREPARED. A couple hundred bucks might come in handy starting tomorrow. (That’s ONLY a hint. I’m CERTAIN you guys have NO CLUE what I’m referring to!)

Wisp Resort is showing a -9° reading at 7:30am this morning. Snow is in the forecast for there today through Thursday.

Cataloochee Ski Area is showing that they are making snow this morning at 25°. I had to chuckle with the wording that Cat’s website posted snowmaking. They posted, “Please note we will not be making snow on guests during skiing hours.”

Typically you’ll see resorts state something like, “No snowmaking during ski and snowboarding sessions.”

However, I’ve ALWAYS felt like resorts were trying to “make snow on me” – especially at some of the ski areas that can create a virtual snow blizzard on the entire mountain.

Sapphire Valley is still reporting more than ten feet of base. I actually captured a groomer pushing snow around there this morning and I started to have some more fun at their expense…but I decided against it. Maybe all of the snow has me in a good mood. 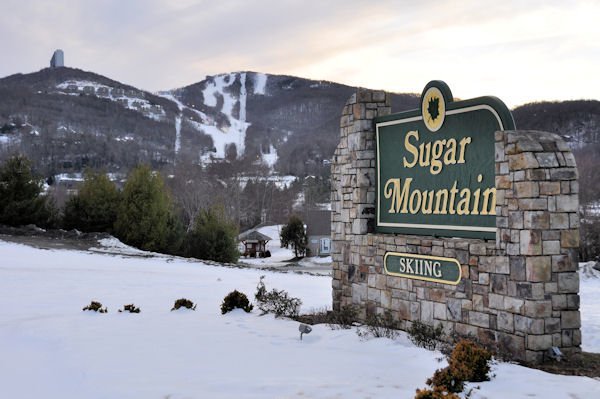 For the first time in MAYBE EVER (at least in my nearly 20 years of posting all of the snow reports) SkiSoutheast.com is reporting more natural snowfall for Sugar Mountain on the season than Sugar is. To date they are reflecting 42.6″ of snow whereas WE are showing 43″.  I realize we’re only talking LESS than one-half an inch, but the fact remains that Sugar’s reporting has been SPOT ON all season and really for most of the last few years.

Honestly for the last couple of days they’ve been reporting LOOSE GRANULAR and HARD PACKED conditions. With the temps being at ZERO on Sunday morning and even at 15° at 8am this morning – I can’t see there being in Loose Granular on their hill. Packed? Sure. Groomed – absolutely as Sugar does an awesome job of maintaining snow.

By the way Sugar was not making snow either since a huge snow storm is on the way. Since I’m posting such glowing commentaries this morning about Sugar, let’s finish with the fact that they are 100% open with 21 slopes and trails.

This LAST image was one captured from Sunday’s Tubing Sessions at Massanutten Resort. I’m telling you that the best tubing hills just might be found in Virginia as Wintergreen’s is pretty sweet as well. 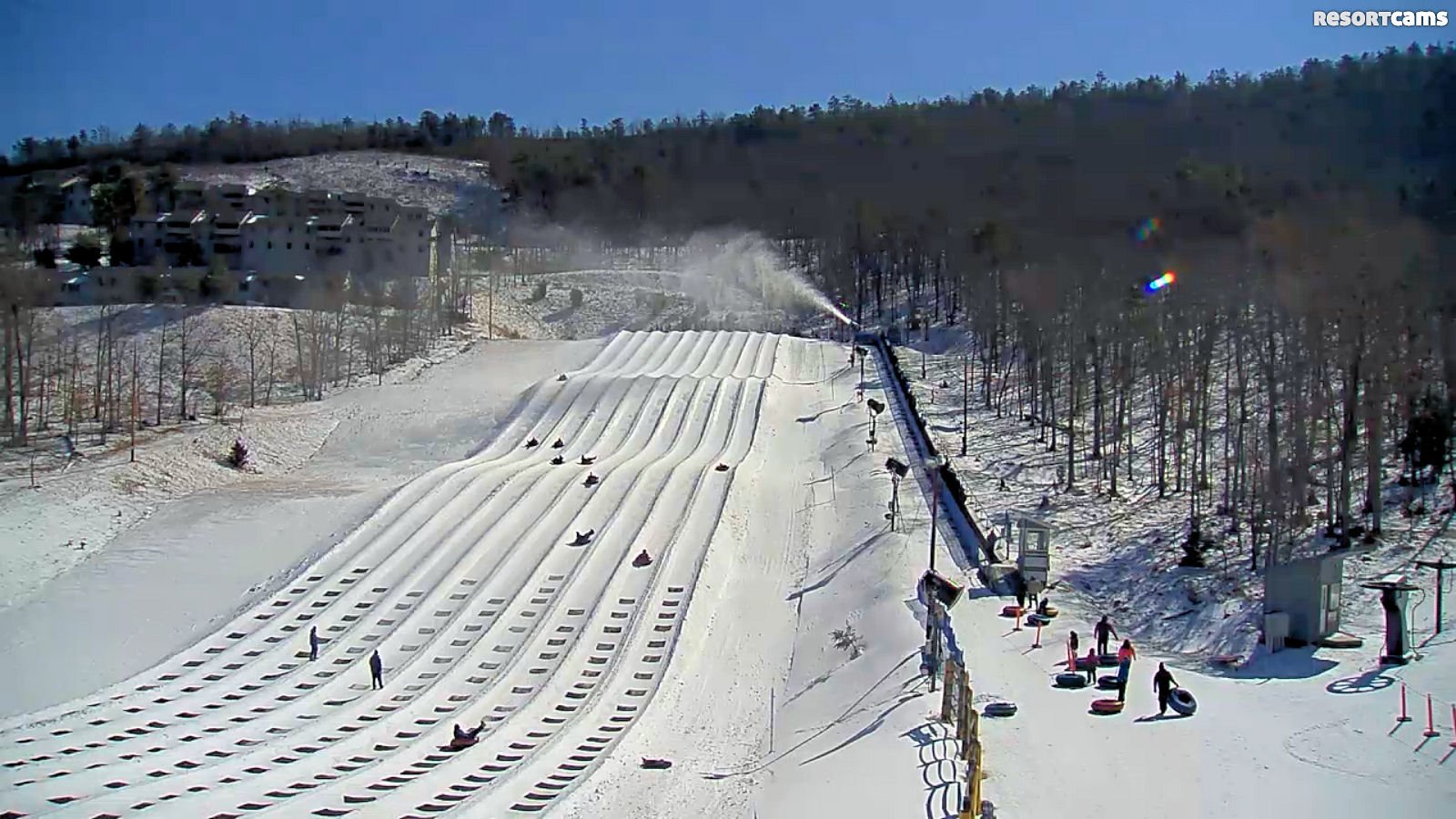 That’s it for this morning. We’re tracking all the snow coming in and if you want to watch it – click over to www.ResortCams.com