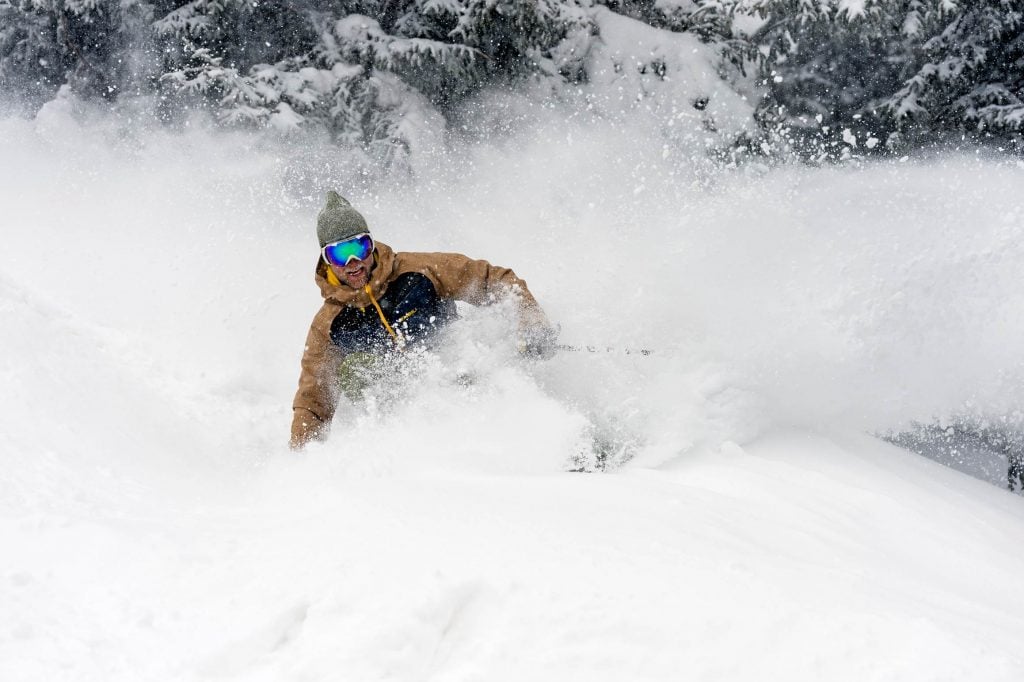 Joe’s column today (and the photo from Snowshoe from two days ago) reminds people that it IS winter!

So I was in the stands yesterday (Saturday) as my son was playing in an indoor soccer tournament at Marshall University, when I overheard another parent state they were planning to go skiing next weekend but he wasn’t for sure if there was enough snow at the resorts right now. There was no way I was going to let that totally inaccurate statement slip by with yours truly providing a firm rebuttal. I quickly stepped up to the plate and let it be known that not only is there plenty of snow at all of the resorts right now, but there was plenty to come.

You could’ve heard crickets, when I felt I hit this one out of the park. Score one for home team.

That gets me to the point of this week’s column, I realize this winter has not brought the amount of natural snow that usually falls from the skies in the region, but the temperatures have been adequate enough for the resorts to cover the open terrain with plenty of man-made snow. The temperature outside when the “not enough snow” comment was made was in the teens and still dropping. Meaning if any resort didn’t have open terrain, the snow guns were running on them to get them open. How can someone make a comment like that without checking the snow reports from the various resorts or at least check the web cams that are available from every resort from every angle? This fact continues to befuddle me to no end. The information is out there folks, use the darn stuff, please!

What I have found though is that the common denominator in every conversation I have as it pertains to snow on the slopes is that it is the adult of the family not the younger person that doesn’t know how to find out. If I would’ve said the same and my son would’ve heard me, he would’ve either looked up the snow report or web cam or told me to do it. Oh how the younger generation is much more up-to-speed on those sort of things. It’s another one of those cases of the Old Dog learning new tricks sort-of-thing.

Then there’s the fact that right outside the gym we were in, there was zero snow on the ground but the temperature gave a clear indication that it was winter. I think the milder temperatures the region experienced earlier this month had everyone thinking that Phil was wrong and spring was right around the corner. Well there is one thing for sure, spring isn’t that far away, March 20, but historically, some of the coldest days of winter occur during the month of February and 2015 is following suit, isn’t it?

Seriously it is winter and it is supposed to be cold during these months, just like it is supposed to be hot during August with fall right around the corner. It just amazes me that folks seem to forget that fact every year. Or they complain when it is cold during the winter and when it’s hot during the summer. I truly believe those folks need to move to San Diego, where’s in the mid-70’s and mostly sunny all year round. To me, that’s pretty boring, give me four-seasons every year. I for one like when it’s cold when it’s supposed to be and hot when the calendar indicates it needs to be. The same old, same old just doesn’t work for this guy.

At the end of the day it’s all about being prepared for what comes your way as it pertains to the weather. Most folks don’t go outside with a down jacket on in August, while I would hope most don’t go out in the winter with flip flops on either. At least I hope not, but you never know with some folks out there. Probably the same ones who don’t realize that despite zero snow in their backyard, there can still be tons, upon tons of snow on the slopes at their favorite ski resort only a few hours away. I am just getting prepared now to hear from the same folks who didn’t think there was enough snow on the slopes that it was or is too cold to go skiing or snowboarding.

You know I say sometimes you just can’t win when it comes to common sense and folks playing in snow. Do understand though that I won’t give up and whenever I have the chance to educate or correct about what truly is going on at the region’s resorts I’m going to do it, either verbally or with my laptop. I have been on a mission for over two-decades and I am not going to stop now.