What Were YOU DOING at the Tender Age of 13?

Remember back to when you were in the 8th grade and 13 years old. What were YOU doing? Chances are whatever it was that was occupying most of your days pales in comparison to that of 13 year old Lindsea Lumpkin. Lindsea hails from Georgia and has been featured on this website annually and for good reason. One, we were fortunate enough to catch the attention of her dad, Tommy, who had become a bit of a fan of our website. After a conversation or two we became Lindsea’s first sponsor. Lindsea was just six years old.

We’ve told the story before but basically Lindsea was previously a wakeboarding phenom around the lakes of Hampton, Ga. (as a four and five year old) and was talked into competing in a snowboarding comp at Sugar Mountain and immediately began winning everything in her age group and beating and competing equally with kids above her age bracket.

Fast forward to last year. Her mom, Donna and Lindsea relocated to Frisco, Colorado, which is a little "cowboy town" between Breckenridge and Copper Mountain. Dad, Tommy flies back and forth and has done so close to 20 times this last year alone! The family made the decision to provide her with the best of coaching and facilities to help her realize her full potential. Prior to that Lindsea was spending a lot of time gaining frequent flier miles jetting back and forth to events and competitions. You can see her 2009-2010 results as a 12 year old – click here

She loves to snowboard, skateboard, and wakeboard, in that order, and Copper Mtn is her “home mountain” in Colorado. Her first ever terrain park was at Silver Creek (part of Snowshoe Mountain) in West Virginia. She was a fan of the park at Appalachian Ski Mountain and liked the longer trails at Sugar as well. Her favorite resort of all is Breckenridge, in Colorado. Lindsea has participated in trips to Windell’s Camp in Welches, Oregon in 2005, 2006, 2007 and 2008. She calls it “the funnest place on Earth". Despite her young age, Lindsea has traveled to Buenos Aires, Rio, Iguassu Falls in Uruguay, Manaus, Brazil in the Amazon, Hawaii, Malta, Germany, England, Italy, Mexico Jamaica, and Canada, and of course numerous destinations in the United States!

Lindsea’s toughest opponent right now is of all things – her age. At 13 she’s in a bracket that has her crossing over from being a super, high-profile, child athlete to having to compete against women. That hasn’t exactly made her an obscure talent. At the moment she is ranked #43 of some 1200 women riders and after the Burton European Open she was #28. Not too shabby for a 13 year old kid, huh?

Father, Tommy Lumpkin added, "She will continue to slip downwards until we go to Stratton, Vermont in March for the US Open and then Rev.Tours at Mt. Snow, Vt." 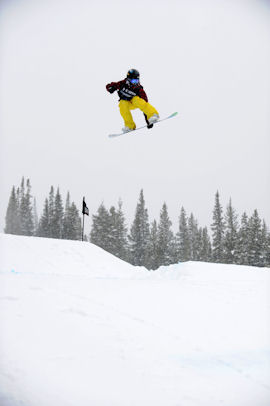 We’ll update you guys once those events are history and regardless of the results, Lindsea is a huge winner in our eyes. We watched from the sidelines as Lindsea has grown from a scrawny little kid who loved all things snow…to a young teen who is blossoming into one of the brightest potential stars of the future in women’s snowboarding.

Lindsea has a ton of sponsors that cover her helmet and snowboard. However her FIRST one, and the one that just so happens to hold a place right at the front tip of her snowboard, is that of SkiNC/SkiSoutheast.com.

Several years ago we lightly predicted that we just might be seeing Lindsea in some future Olympic event. The way things are proceeding, it looks like she’s on pace to perhaps make that a reality for the 2018 Winter Olympics scheduled to be held in Russia. Her proud pop wrote, "Who would have thought it?? Mike, we so appreciate everything you did and are doing for us…..we hope that keeps going until after she wins the Olympics—-btw—you will get free tickets—-probably 2018!"

What began as a fun sponsorhip seven seasons ago…just might take us to Russia one day. Who would have THUNK that, Tommy!?!?

Check out her pod BY CLICKING HERE

SHE’S A REGULAR KID TOO… 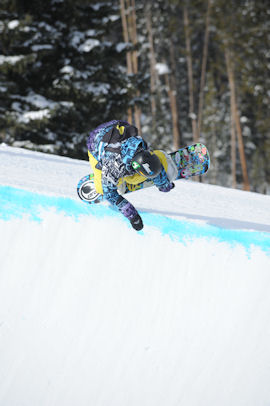 Lindsea is a straight-A student who says she wants to be a pro snowboarder and skateboarder, and she’s smart enough to have an alternative life-plan. If the snowboarding and skating thing doesn’t work out, she’d like to be a aeronautical engineer. She enjoys censored hip hop music, baggy basketball shorts and skateboard shoes.

However while competing all over the world is exciting and glamourous, it isn’t without a lot of extra work and sacrifice. Most of Lindsea’s competition and particularly those in her age range are home schooled. Not so for Lindsea. She attends Summit Middle School in Colorado and she’s on an early release program that allows her to be on the mountain Wednesday through Sunday’s each week. Her travels have taken her to so many destinations which include Switzerland this season that Tommy says she knows her way around most every airport you can name. She’s a 13 year old, international traveler.

…ummm…again…where were YOU at 13? As for me – I don’t want to even talk about it. I believe I was t-h-i-n-k-i-n-g about trying out and failing to make a JV football squad.

Tommy said that it is tough at times for his young phenom because at the pace they are flying around right now – Lindsea will miss 30 days of school. That puts a lot of stress on Lindsea to make up all of that work and still find the time to compete at the high level that she wants to compete at. Notice the order of importance to Tommy. Her regular life and that of a student comes first. Then snowboarding. He admits that it is a hard balance to find at times but one that happens because of Lindsea’s "support unit". Her mom is her constant rock and dad Tommy her biggest fan. While he’d love to live full time with the family at their house in Frisco, Tommy doing "his thing" back home in Georgia to fund the lifestyle that they’re all living.

However, make no mistake about it – THIS IS THE LIFE THAT LINDSEA WANTS. She’s been asked a number of times in her young life – "where would you rather be? At Disney World or Windells, Breckenridge, etc.?" The answer every time? Snowboarding or skating. The answer is quick and firm. This IS what she loves doing.

Tommy shared that the next two years are crucial for Lindsea even while she’s competing against women sometimes more than twice her age. While in Switzerland Lindsea noticed one of the competitors from Japan was 30 years old. She approached her dad and said, "Dad, she’s OLD!" Obviously her opponent could have complained about Lindsea being too young…

According to her dad, if she performs "just okay" at the remaining events this season she should finish the season in the top 50 in the all-important Swatch World Tour TTR Rankings. This is important because it basically gets you invited to all of the important events instead of having to go through early qualifying rounds.

You can check her women’s world rankings out and see some pretty sick stuff for this 13 year old sweetie.

Snowboarding events are set up so that even an 8th grade, 13 year old can get into an event and compete. The closest equivalent to what she’s doing would be to imagine having to compete as a 13 year old golfer at The Masters against Tiger Woods. In the world of skiing and snowboarding, you’re grouped in against everyone at times. Even so, she’s beating half the field and either winning or almost winning anything that’s in her age group.

Finishing in the top 50 has some huge advantages for next season. That would insure her automatic invitations to both of the Gran Prix events and she’d be provided first preference to registering for any of the 6 star Burton Global Open events. If Lindsea can repeat as a top three finisher at the nationals (where she won the pipe and slopestyle last year) she will pre-qualify for Rev. Tour again next year and get invited back to Gold Project at Mammoth and Park City with the US Olympic development team.

Additionally (and incredibly) if she finishes in the top 250 (pretty much a given) she will be eligible for the first ever World Snowboarding Championships in Oslo, Norway to be held in February of 2012. If she can pull off a top 30 finish in that event she would be 14 year old competing in the WORLD CHAMPIONSHIPS!

Pretty heady stuff for the 13 year old child of Tommy and Donna Lumpkin of Bogart, Georgia – don’t you think?

Right now she’s juggling her school work, practicing and enjoying life as she prepares to compete at all of the Burton Opens – New Zealand, Switzerland, Canada, and Vermont. She’ll be at both Gran Prixs, the Rev. Tours and maybe a few Burton AM events for the rest of this season.

What are YOU DOING this Spring!?!?!

Feel free to email me your thoughts at [email protected]

Previous Post
13 Year Old Lindsea Lumpkin is Flying High in the World Rankings! Notice the SkiNC SkiSoutheast.com Sticker on the tip of her board!
Next Post
There’s a Ton of Snow, Don’t Worry!