What a Gift We’ve Been Given. 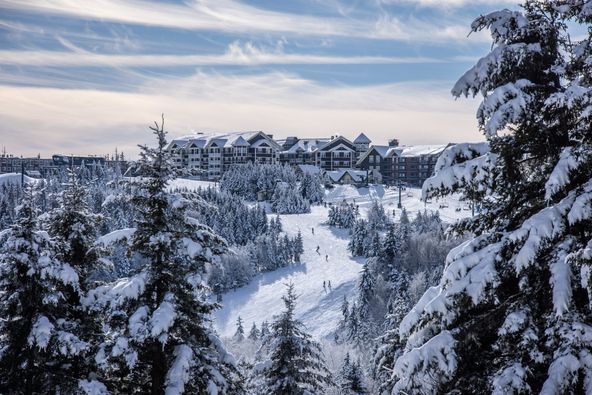 Back to the gift…

Every ski resort in the region is open except for Omni Homestead Resort in Virginia and they plan on opening any day now. Base depths are looking awesome with only one ski resort really skewing their numbers. We’ll leave it at that as we don’t pay much attention to base depths anymore. As long as there’s a few inches between our skis or snowboards and the ground – to protect the p-tex we’re golden.

Every resort in the region qualifies for those depths and more.

More Snow Fell in the region.

This has been interesting snowfall year thus far. We’ve had snowfall on numerous days since late November and December yet in terms of measurable snow depths it has been a season that has greatly favored the highest of highest elevations. For example, we’ve seen 19.5″ of snow atop Beech Mountain and yet only 1.5″ of snowfall so far at Appalachian Ski Mountain. My home is located about halfway between the two ski areas and I too have seen lots of snow falling, but only about 2″ of accumulation on the season.

Another 6-8″ of snow fell in the West Virginia higher elevations, whereas Winterplace Resort reported NO new snowfall in the last 24 hours. So again, elevation is ALWAYS a huge player in where the most snow falls, however this season a bit more so than usual. This season we are often seeing the line of snowfall drop drastically within 500′ of elevation.

I heard from our own Kenny Griffin by text yesterday saying, “Snowshoe is gonna be so good geez.” He was referring to all of the snow that has already fallen up there AND the addition of up 15″ MORE SNOW expected up that way over the next few days.

Two things I didn’t think I would EVER be talking about or reporting on are: Mask Wars and Ski Areas Being SOLD OUT for sessions.

After my Monday post about lots of eyes being on our industry regarding mask wearing and covid-19, I received a ton of emails and there were some posts/comments on social media and for the most part the “early returns” on those comments were that you guys were witnessing a lot of the same things. Over the last 24 hours or so I saw a lot more emails and social media comments from people claiming to see resorts really clamping down on monitoring mask usage.

That’s awesome to hear. A buddy of mine has ridden at Sugar each of the last three days and he (and others on Facebook) have shared that they are really being strict about it and he has seen a couple of people pulled out of lift lines and escorted off the property. I cannot personally confirm that, but I think it is just smart business right now.

If we want to see ski season last all season long, we’ll need good cooperation from everyone.

The good news is that from most of the people I have spoken with, even the most rebellious of people are giving in and pulling masks up when asked to.

I can’t tell you how many emails I have received from readers giving ME a hard time about “how it is understandable to be required to maskup INSIDE, but not OUTSIDE.”

I’m not sure WHY it is so hard for some people to simply “let it go” and just do what the protocols mandate. In their simplest form, all it is saying is:

FACE COVERINGS ARE REQUIRED INSIDE ALL BUILDINGS AND OUTSIDE WHEN YOU CANNOT MAINTAIN 6 FEET OF DISTANCE!

(So ski and ride mask free across the slopes from top-to-bottom but when you close in on the lines at the bottom, pull it up.)

We’ve been talking about HOW crowded we are already seeing some resorts even days before Christmas. The Christmas-to-New-Year week is ALWAYS (when weather cooperates) THE MOST VISITED week of the season. This 2020-2021 version will be even more so.

However, I’m just not sure I’ve seen things quite as busy as they are right now (this early) at places like Sugar Mountain, Beech Mountain and Cataloochee Ski Area. I think this season we have more pent up demand, and people with the time and resources to be able to travel. Perhaps the NC Ski areas also offer the lure of “convenience” as those resorts are just an hour or two from metro areas.

To be clear though, I’m seeing things already playing out differently in terms of slope capacities as – for example – both Massanutten Resort in Virginia, and Snowshoe Mountain Resort in West Virginia have reported being SOLD OUT for certain dates.

We are SOLD OUT for skiing and snow tubing today.

We’ll be open today from 9:00 am – 5:00 pm with 5 lifts and 5 trails for all levels of ability. Partly sunny with high temperatures in the lower 40’s. Capacity limits are in place, so buy in advance to guarantee your spot, available remaining tickets can be purchased online.

All Access Lift Tickets are SOLD OUT for December 28-31. They mentioned some Silver Creek ONLY tickets being available.

Tis crazy times we are living in….

I have personally placed several jobs on ZipRecruiter for help wanted and I keep seeing on the news about how many people are out of work and that there are so few jobs available.

If you’re reading this…what I can tell you is that you should have a quick look at EACH of the ski resort’s Facebook pages as MOST of them are mentioning all sorts of job openings and FREE SKIING and SNOWBOARDING is one of the perks!

Obviously the big issue for ski resorts is that nationally as many as 7000-8000 workers come to the 470 +/- ski resorts each year through the J-1 Visa program. The vast majority of those workers are not being allowed into the United States this year due to the visa ban – again due to Covid-19.

Even in normal years, things can be difficult for ski areas to find suitable help. According to the NSAA, an average of 85 jobs went unfilled last winter season at resorts in the region that includes Tennessee, Pennsylvania, West Virginia, Virginia and North Carolina — in large part because of their remote locations.

Throw in the challenges due to Covid-19 and ski areas are s-t-r-u-g-g-l-i-n-g to find people wanting to work.

“We’ve experienced this for many, many years, but it’s become very critical now,” said Jerry Huskey, a risk manager at Ober Gatlinburg who has worked in the resort’s human resources department for more than two decades.

SO – ya wanna job? Call about ANY ski area in the region and they’ll hook you up.

These last ones are from a tech-challenged buddy of mine, while at Sugar Mountain yesterday. I asked him to send me some, so I HAD to post them! Ron likes to ski fast. He has two speeds – stop and go hard. He typically whips me on top speed by 5 mph or so.

Maybe it is a byproduct of getting a little older, but I treat skiing like I do chicken wings these days. (I KNOW that is a comparison you’ve probably never heard, but let me explain.)

When Buffalo wings first hit the United States in force, there were restaurants all over the place serving up flavors like:

I love anything hot and I used to eat wings almost for sport. Who REALLY likes to eat something so fiery spicy that it kind of hurts? However, I am being honest when I make the claim that I once made a girl cry after she only touched her mouth to a chicken wing.

I still love chicken wings, and while I have no gastronomic limitations for still eating them so hot that they make you sweat – I just don’t. I NOW, just want to ENJOY them.

That was a VERY LONG way to get to – that’s how I like my skiing these days. I’m very happy cruising in the mid-to-upper 30s and an occasional 40-45 mph, but I no longer feel the need or desire to simply point my skis straight down and hit the 60 mph mark or faster. (Though I will admit that if I get first tracks on Camp 99 at Snowshoe after a night of corduroy perfection…I’ll open things up a bit.)

My buddy Ron Kent who skis Sugar 2-3 times a week only KNOWS one speed – all out.

I hope you enjoy these video shares:

My daughter Madi and I played at Beech Mountain the other day with Kenny Griffin, Austin and Nina Breed, Lisa Clough and Justin Partridge from our crew. Madi and I started feeling “under the weather” and headed home after 8 quick laps. Here are the rest of the crew! 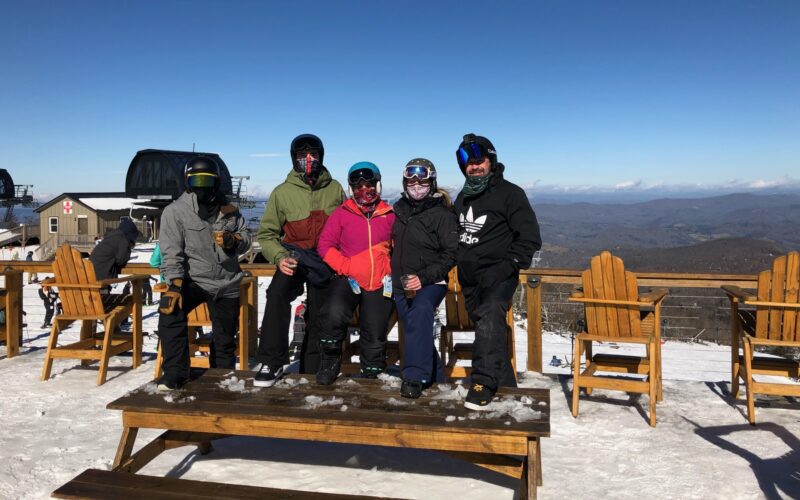