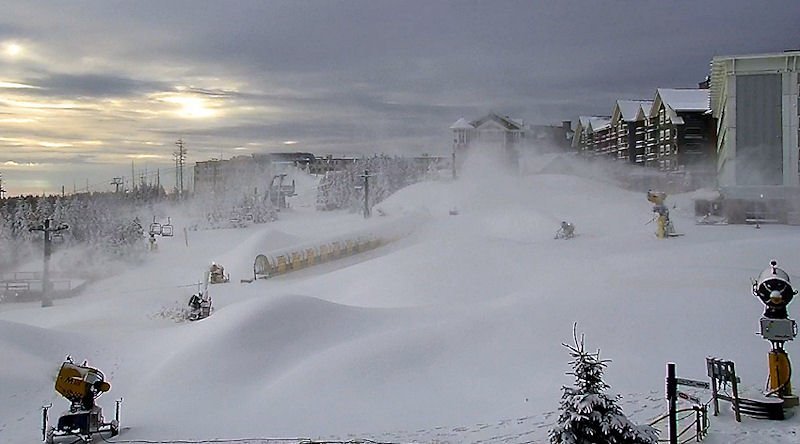 Charleston, WV – Skiers and snowboarders will be heading to the mountains of West Virginia in less than two weeks as the first downhill area will be opening for the 2014/2015 season.  Snowshoe Mountain is planning to open Wednesday, November 26.  The slopes at the other alpine areas in the state will open shortly after, Canaan Valley, November 29, Timberline and Winterplace, December 12 and Oglebay when weather permits.

The cold temperatures and the season’s first natural snow throughout the mountains of West Virginia have allowed the resort’s snowmakers to begin to work on covering the slopes for skiing and snowboarding.  For the latest conditions go to www.goskiwv.com.

“The scheduled opening is on-target for the ski industry as Snowshoe traditionally begins the season Thanksgiving week, wherever that holiday falls on the calendar and looking at each of the various resort’s webcams, the slope coverage looks great right now and will only get better with the forecasted cold temperatures,” says Joe Stevens, spokesman for the West Virginia Ski Areas Association.  “Along with being important for snowmaking the chilly temperatures also help us in the metro areas throughout the region as folks start thinking about skiing and snowboarding when the temperatures drop.”

The mountain state’s resorts annually attract over 800,000 skier visits, and last year that figure was reached.  “The cold temperatures get our blood pumping, all of the resorts are getting ready for the skiers and snowboarders right now and that’s exciting,” says Terry Pfeiffer, President of the West Virginia Ski Areas Association and President of Winterplace. The top states providing skiers and snowboarders visiting West Virginia slopes are Virginia, North Carolina, Ohio and Florida.

Previous Post
It’s Beautiful Atop Snowshoe’s 4848′ Elevation This Morning!
Next Post
What a Fun Weekend It Was