This morning is starting off with a little, misty, drizzle but it should burn off and be mostly sunny across the region. Lows this morning are mostly in the upper 20s to around 30°.

Today’s Photo of the Day is from Rita Davis from Massanutten Resort. Photo shown above and at the end of this post

Sunday’s are my usual day to ramble. Apologies to Joe Stevens, who pointed out last Sunday that I didn’t DO my normal, Sunday rambling.

Someone awhile back asked me what the “Sunday ramble” was about, and I’ve shared this before, but for our new readers (and there ARE a ton of you this season) – it all started years ago. An old Tennessee fellow by the name of John Noble Wilford wrote, “After one rambles through the maps for a time … some overall impressions begin to emerge.”

Wilford is a Senior Science Editor of the New York Times and he won the 1984 Pulitzer Prize for National Reporting. He’s written several books and in one of those he wrote the quote above. I remember that his writing style is almost poetic. He once wrote this about our space heroes, “Like the dragon-slayers of myth, a few men went forth to meet the demons in the sky and do battle in behalf of all lesser mortals.”

As most kids of the 60s, I wanted to be an astronaut, so Wilford’s stories always impressed me.

So around the time that I was really into his writing, my family was prone to just get out of the bed on Sunday mornings and with no prior plans – just “ramble through the maps” or explore some new destination that was a day trip away. On ONE of those occasions, as we left our driveway, my daughter Carrigan asked excitedly, “Daddy, are we rambling today?”

Hence, somewhere along the way, as I would sit down to do the Sunday, FirsTrax, I decided to ramble.

Webster shares the definition of “ramble” as:

1a: to move aimlessly from place to place
rambled through the little town

b: to explore idly

So there you go…and by its very definition – I just rambled, and here is some more.

Despite what Punxsutawney Phil said on February 2nd about there being six more weeks of winter, we’ve not HAD much of winter since. In fact, using the Seven Devils weather station as the focal point, of the last 47 days since Groundhog Day, there have only been 20 of those days where the temperature dropped below 30°. So, in reality, there were only THREE weeks left of winter at that time.

The mountains of North Carolina picked up 14″ of snow from February 2nd through February 7th and then the snow JUST STOPPED in the higher elevations of Western North Carolina. While there haven’t been any warm, blow-torch periods, it hasn’t really been wintry either. Seasonal…but not wintry.

Interestingly though, researching David Lesher’s Canaan Weather Center, the mean daily maximum temperatures have been MUCH MUCH colder than last season.

So THAT is why we’ve seen such great conditions lasting right up to today.

Could We Have Seen the LAST Snowmaking of the Season?

Maybe. There are no cold, snowmaking temperatures in the forecast though Saturday, March 27th, and in fact, showers are in the forecast for Tuesday night into Friday morning across the entire Southeast and mid-Atlantic. The forecast DOES appear to be for sunny skies NEXT WEEKEND and that could prompt ski areas to shut things down after next Sunday, March 28th. (I have heard some rumblings of a resort or two closing weekdays this week and perhaps the following week to reopen into the first of April.) 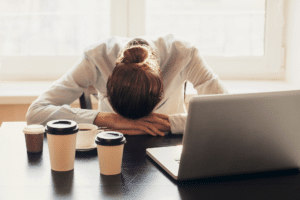 There just isn’t enough coffee in the world to keep these peeps going much longer without some well deserved rest! Click to Enlarge!

However, I will also add that ALL of the ski resorts in our coverage area have had REMARKABLE and VERY PROFITABLE seasons. All of the staffs are drained physically, emotionally and mentally with all of the challenges, extra workloads and such that this season brought with the influences of covid-19. So MY educated guess is that most, if not ALL of our ski resorts will close Sunday, March 28th for the season.

There just isn’t enough coffee in the world to keep these peeps going much longer without some well deserved rest!

There ARE resorts that are choosing TODAY as their closing day, so check out the SNOW REPORT for those schedules. A couple of resorts are closing mid-week and planning to reopen next weekend – weather permitting.

I was doing some work on my computer on Saturday and occasionally glanced at the webcams and there were some decent crowds at Massanutten and Wintergreen, and I saw some brisk traffic at Snowshoe Mountain, but for the most part I saw only light traffic elsewhere across the entire region on the ten ski resorts that were open.

Without question this was the FIRST weekend, maybe of the entire season that was not very, heavily trafficked on the slopes.

At one point, around 3pm or so, I looked at the Beech Mountain summit camera and then at the new, slopeside camera at Appalachian Ski Mountain and there were only a handful of skiers on the mountain. I went to dinner over at The Bayou in Banner Elk on Saturday evening and while the mountain coaster parking lot on Hwy 184 was packed full, the slopes of Sugar Mountain were only lightly dotted with peeps.

A Quick Glance of “Rambling the Map” 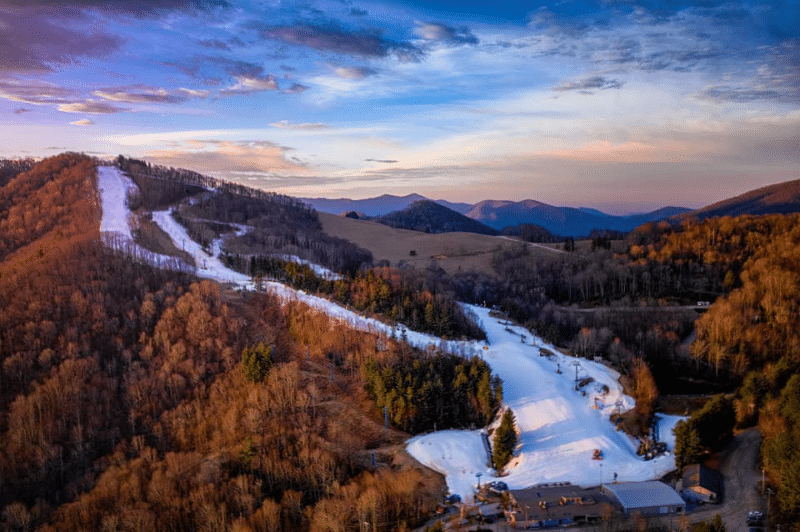 Massanutten Resort – 100% open with all 15 of 15 slopes, 5 lanes of tubing. They will be closed March 22 through 26 and plan to reopen on Saturdays and Sundays weather permitting.

Snowshoe Mountain Resort – 59 of 61 slopes & trails still open with terrain parks open as well. Today will be the final day of operations at Silver Creek for the season so head on over there and help them give “The Creek” a proper send-off.

Wintergreen Resort – 24 of 26 slopes open for day sessions today. Closing for the season after today’s sessions.

All other ski areas are already CLOSED DOWN for ski & snowboarding for the season.

Spring Was the Theme of Saturday’s Photo Shares

Ric Wilkinson shared this sweet corduroy shot with the sun rising as the background this morning at Appalachian Ski Mountain. They posted, “It’s hard to believe we only have 1 more #SunriseSunday after today before the season is over! Get out here and get it while you can.” 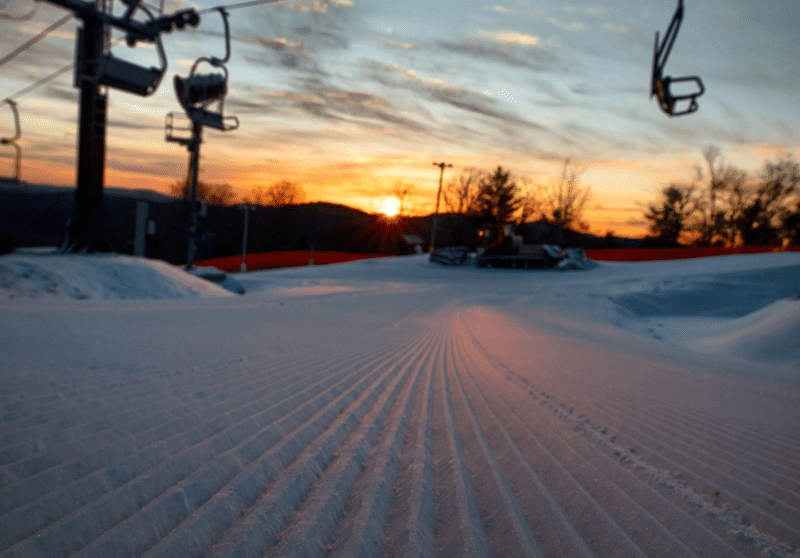 Here are some nice photos from Bill Nabers who is a patroller at Bryce Resort. These photos are from Snowshoe Mountain on Saturday. Bill wrote:

Today, Saturday, I decided to take a trip with my friend Tim and enjoy the first day of Spring at Snowshoe. It was a very enjoyable day and the skiing was great. When we arrived at Shaver’s we noticed some very dry machine made snow in the parking lot. They had made snow in the Spring! (It was about 20 with low humidity overnight). I appreciated their commitment. We went over to Western Territory and we were rewarded with “freshies” (new snow) on the first pitch of Shay’s. Even where the snow was not new it had been well groomed and was set up for fun. Good coverage. After hitting Shay’s and Cup for a while we ventured over to the Basin and enjoyed runs all across that side. The snow started softening up after 1:30 pm, but by then my legs were starting to wear out. I was covering vertical fast using the high speed lifts and skiing longer runs than I usually ski at my home base. We headed back to Virginia feeling very contented. If this is my last ski day this season, it was a good one to close out 20-21 on. If you can make it out to Snowshoe soon while they are still open, they still have a good base of snow for you to enjoy the Spring on. 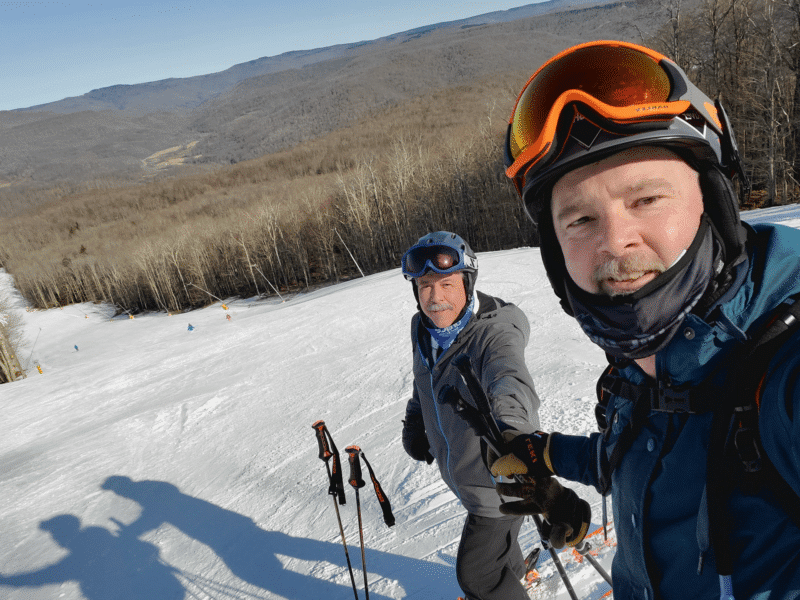 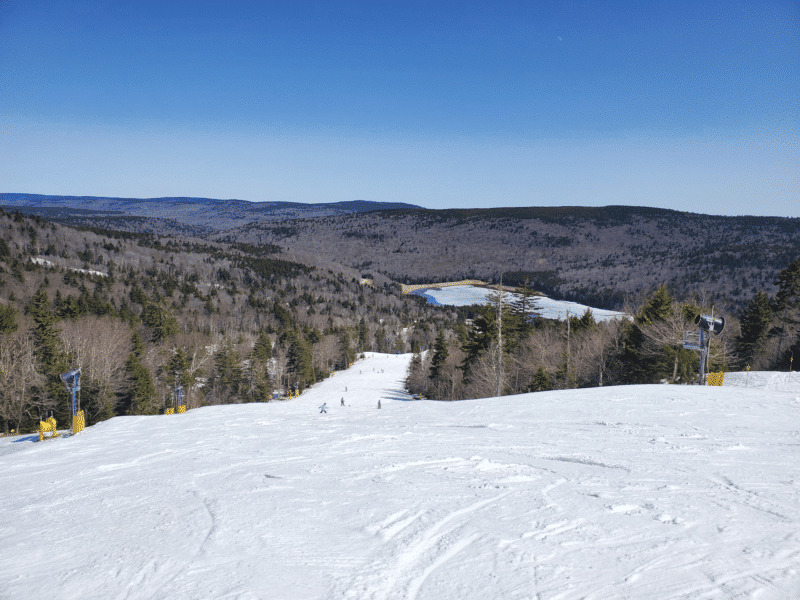 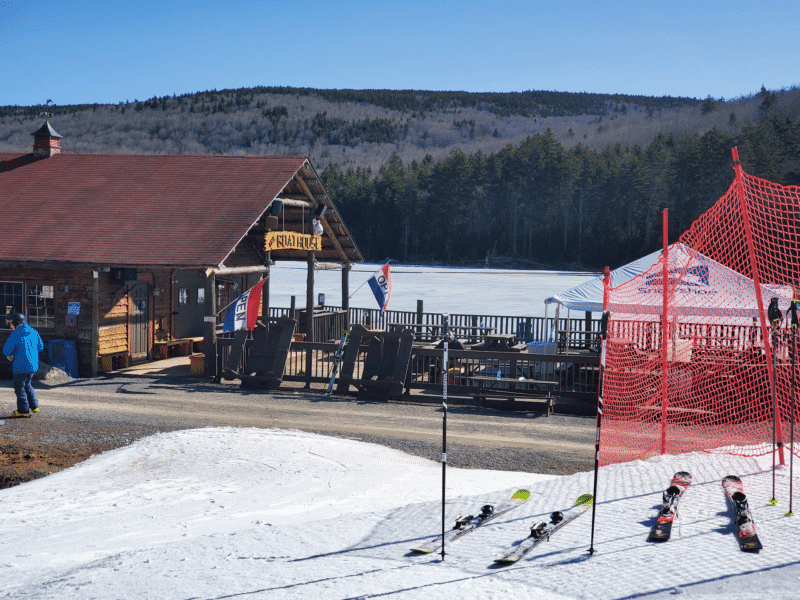 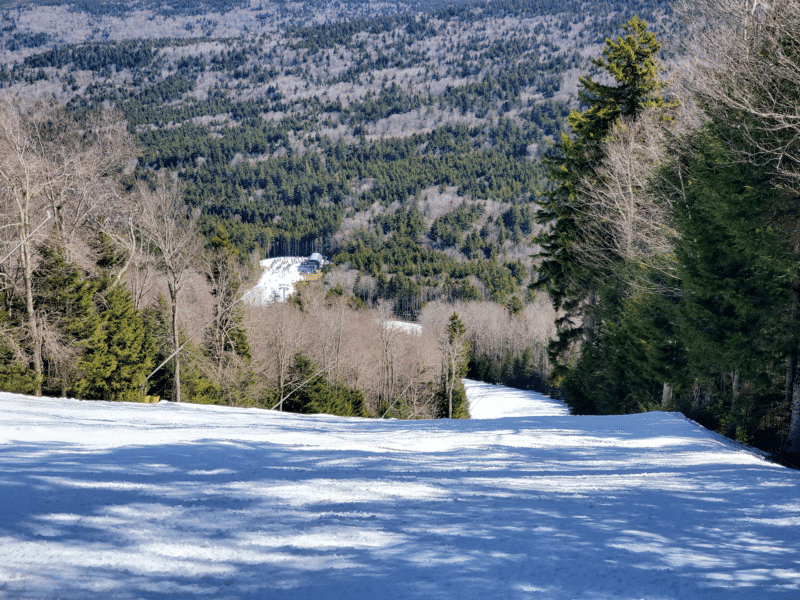 One more from Bill. Thanks again, brother. Click to Enlarge!

I had to share Rita Davis’ photo from up at Massanutten here, again. There’s something about those Shenandoah Mountains! 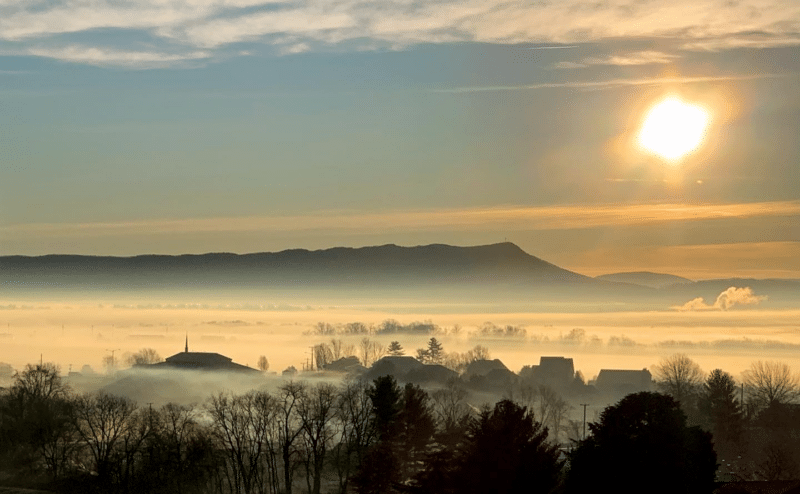 Photo by Rita Davis. She wrote, “All winters melt into spring.” Click to Enlarge!

Despite the light, skier-visits this weekend, we are still seeing around 11,000 visitors daily to our ski, Facebook and ResortCams content. We appreciate YOU GUYS!

I’ve received a few reports of some light “icing” on surfaces at the highest elevations this morning. Quoting Hosea 13:3, “Therefore they shall be like the morning mist or like the dew that goes early away, like the chaff that swirls from the threshing floor or like smoke from a window.”

Translation, any icing will disappear like the morning mist.

Joseph, that’s about all the rambling I can do today. Gotta go pull out those golf clubs are start swinging them! You guys have an awesome Sunday.

Previous Post
What a Ski Season it Has Been! Happy Spring Everyone!
Next Post
Time To Give It One Last Try