Watching The Season Set Over The Horizon

Happy springtime skiers and riders of the Southeast!

Always a pleasure to share a take on how the skiing has been, even if this is the last hurrah for now.  By in large the unbelievably consistent cold weather has provided us with many opportunities to make meaningful memories in a season unlike most.

To simply put, the longevity from mother nature has given us a La Niñ-Ya! to cherish for years to come.  Hopefully your gear is not stowed away yet so you can (and will) take advantage right now while the lifts are spinning.

If you read the posts on here frequently you have already heard that crowd sizes are down, and to us die-hard skiers and riders that means your chances to do run after run go up.  It also means that your legs can still get that much desired burn since the snow conditions are in the freeze to thaw cycle.

I for one think that a late afternoon serving of mashed potatoes is almost as enjoyable as soft dry powder, especially with the sensation one can feel the next day.

Another perk about spring skiing is that the lift ticket prices shrink down too, and if you plan your turns well you can maximize the most bang for your buck. Case in point with Sugar Mountain, NC in which their March Madness pricing is in effect, and a night skiing session midweek (Monday to Thursday) grants you access to this form of freedom for a whopping $23.

Bear in mind that they also have deals for the daytime sessions too, but my window was late in the day.

Night skiing after daylight savings is more of a twilight event in which the first two hours or so are accompanied by the sun.  This poses a small dilemma as to which googles to wear, because true night skiing has flat lighting that can create some visibility challenges with the incorrect tint.  It is advised to go for yellow or clear while under the lights, but that is not as ideal when there is albedo reflecting off the snow.

I saw some people going with sunglasses, others with light rose tinted goggles, and a few brave ones with nothing.  I often wonder how people can do that last choice, but that pales in comparison to the gloveless warriors.

During these first few hours  of “night” the snow conditions were soft served with a touch of corn.  Getting momentum requires a little bit more exertion, especially from the upper body, but with enough slope you can let gravity take charge.

Using warm temp or universal wax is worth the effort to apply it, because it was apparent on the flatter parts of Switchback who had that glide assistance versus those without it.  There were a few thin spots towards the middle of the North Ridge portion of the descent down, but the size of the questionable spots were nothing to worry about. Overall the base depths were adequate to assure no scraping underneath. 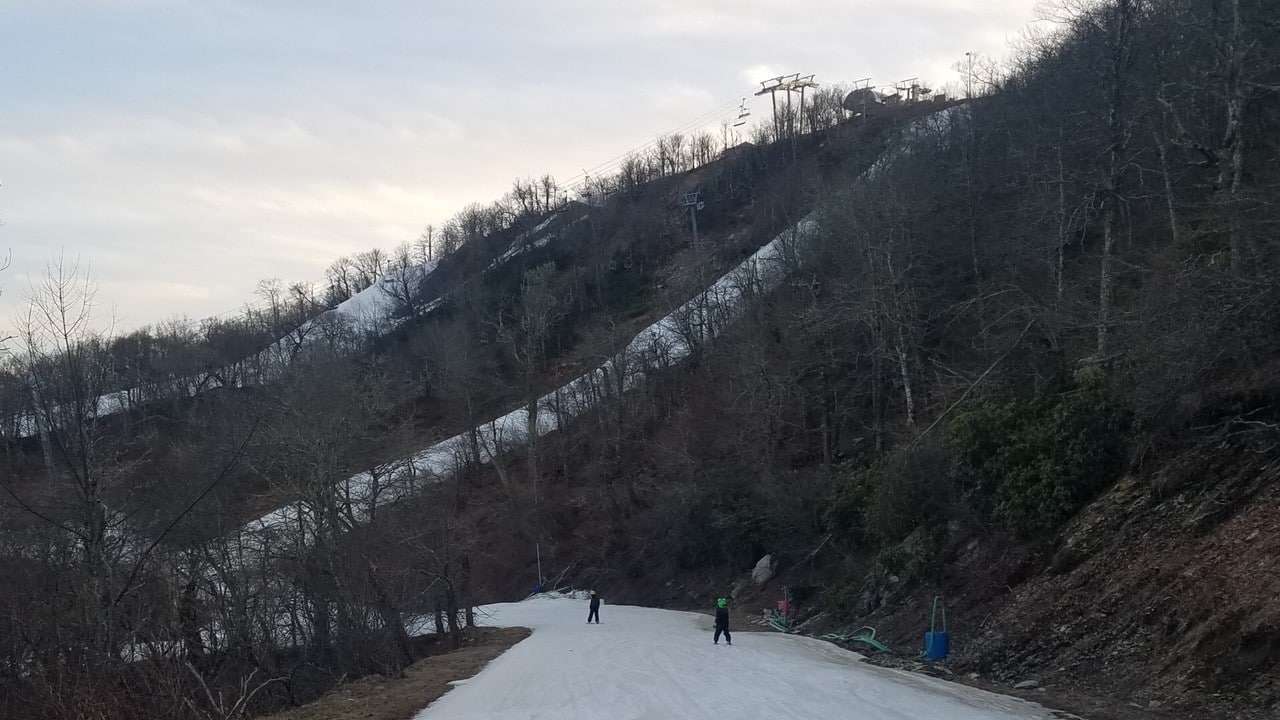 Sugar Mountain does it right when they prioritize which runs get man made snow first, and they always make sure to provide top to bottom terrain. At night that route is Northridge to Switchback, and then you can showcase your skills on Upper and Lower Flying Mile.

If you are a fan of big air there were plenty of side hits to launch off of with enough elbow room to avoid others. They also had Oma’s Lift serving Oma’s Meadow, the Green Lift offering Big Birch, and the Easy Street lift for a collection of beginner slopes. I could hear some hooting and hollering from that area as I rode up the main lift.

With each ride back up the sun crept closer to the Appalachians. This particular lift, the appropriately named Summit Express, quickly takes you up 1,200 vertical feet in roughly five minutes.  I made it a challenge to do laps as quickly and safely as I could, because I was hoping for a brightly colored sendoff that only comes at dusk.

Unfortunately there would not be a brilliant display this day, but instead just a small glimpse of color.  This partially due to the lack of scattered clouds that bounce those red, orange, and pink rays back.  Hopefully you have experienced the pallet at its finest because there is something special about those moments with a dark silhouette of mountains underneath. 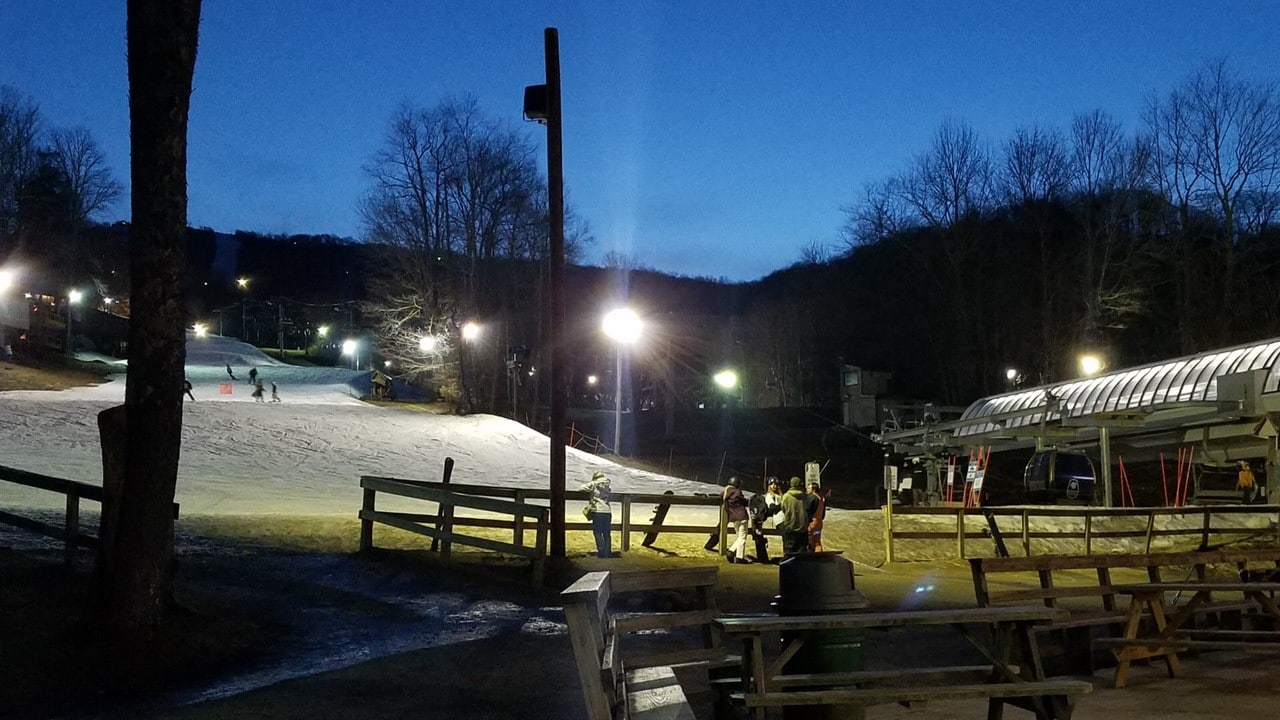 A plus side to all of this is that the stars and moon were visible, and that provided a nice contrast from the twinkling of street and house lights from the surrounding setting. Orion and his belt hovered near the horizon as he too was about to take some time off for a few months.

Nonetheless it was time to soak in the transition and make each turn count for something personal. With each ride up two things became evident and that was the firming up of the snow and the need to zip up the jacket completely.  While the daytime has been hot the nighttime still is not, and the last thing you would want to be caught unprepared.

A base layer and appropriate jacket and snow pant combo was sufficient for the situation.

The bigger situation at hand though it that the inevitable is coming, which is the conclusion of the season.  I’m sure the buzzing of the bees, warmer temperatures, longer daytime hours, flowering and budding of the trees, and even the allergenics have kickstarted the summer warrior within.  While that may be true, that should not be a reason to hibernate the inner ski and ride enthusiast just yet.

There is still time to get those turns in, but much like a sunset this season is setting fast. 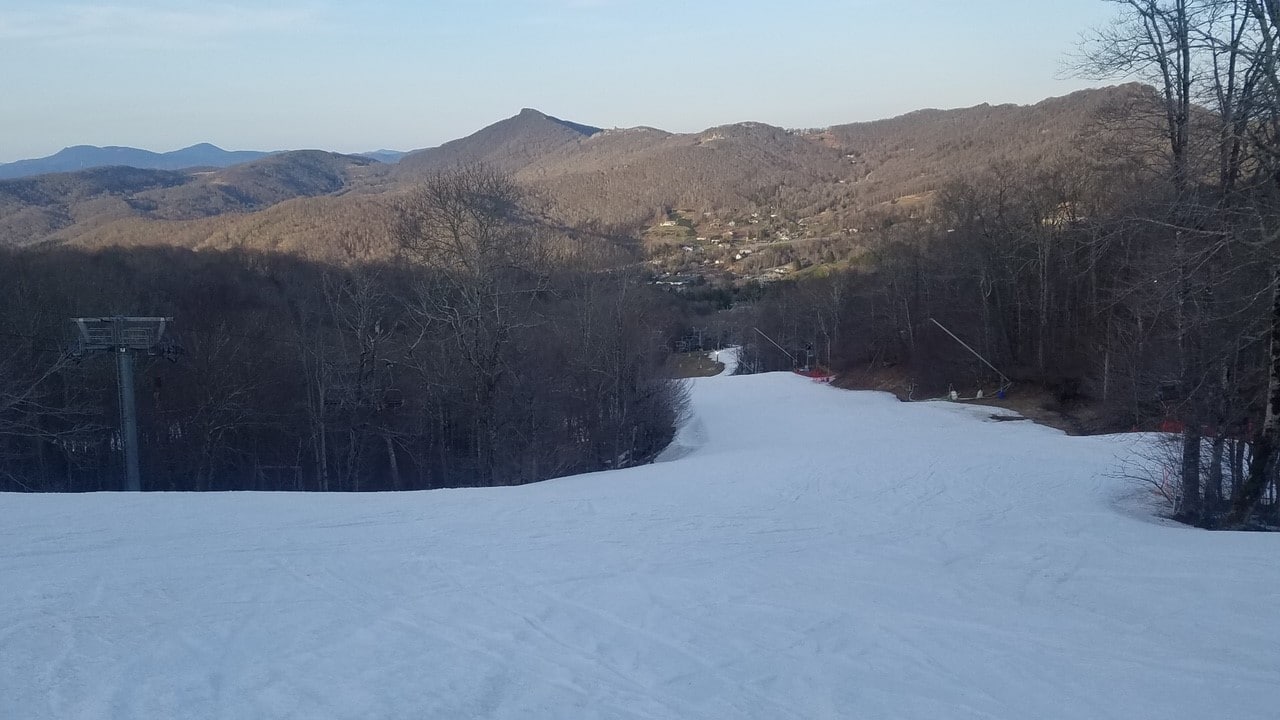 Even though some of the resorts in the region have closed up shop, others will have their own special celebration ceremonies for another season in the books.

Sugar Mountain is known for their “Burning of the Snow” event where they literally have a fire near the base of the lift as a symbolic conclusion.

Nearby at Appalachian Ski Mountain they will host the annual Meltdown Games on Saturday and Sunday with a litany of events such as a Cardboard Box Derby, Trash Bag Downhill, and the always entertaining Pond Skimming and Costume Contest. They both know how to make the best of a saudade situation.

Sometimes the best words have already been said, or in this case sang, in order to wrap things up with a nice bow.  I can recall the car rides homes from the slopes during my youthful years, and in particular the kind of music my folks would play.

One of my favorites was Big Head Todd and the Monsters, and in what is probably their signature hit song the chorus amazingly fit the description of this annual ascension to the offseason in which they sing “It’s bittersweet. More sweet than bitter, bitter than sweet. It’s a bittersweet… surrender.” 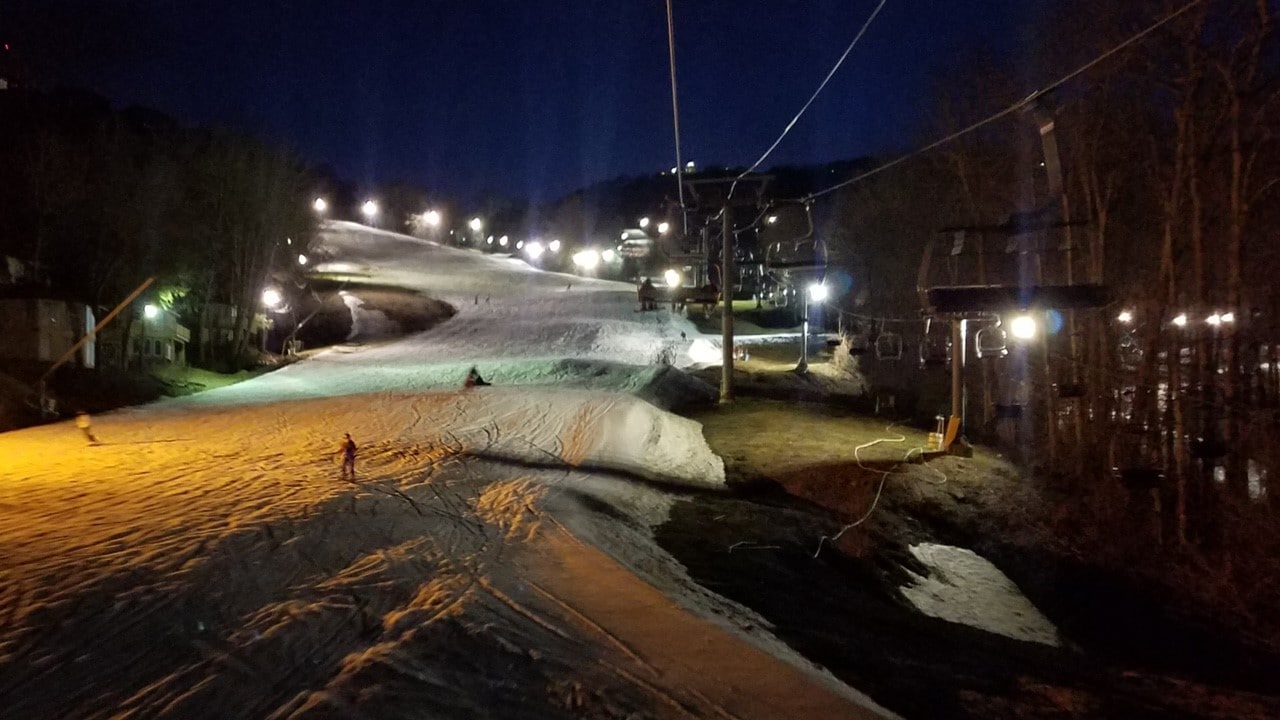