(Updated: We Jumped The Gun!) The Home To The Greenbrier Pga Tour Golf Tournament And The New Orleans Saints Training Camp To Open For Skiing??? 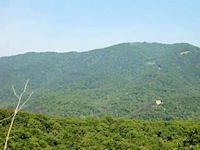 EGG ON FACE? SOURCES ON CRACK?

UPDATED: 09/05: A funny thing happened on the way to “breaking a story”. We were wrong…or at least several people were. We were silently informed by connections from Colorado, West Virginia, Virginia and Pennsylvania that The Greenbrier was going to be announcing that they would be opening up for skiing and snowboarding in the near future. (Probably not until the 2015-2016 season…but soon enough.)

We posted that news a day earlier than the “supposed” news conference to announce such. I even went as far as emailing the President and Marketing Director of The Greenbrier to show them our story and express the excitement felt around the region. (They probably had a great laugh.)

The “NEWS” of Thursday was INSTEAD to announce that The Greenbrier was UNVEILING A NEW STATE-OF-THE-ART TENNIS STADIUM ON RESORT GROUNDS. You can read that announcement here.

…ANYWAY…with egg all over our faces, I made contact with our “reliable sources” and EACH source informed me “THIS IS GOING to happen and they were amazed it wasn’t announced yesterday.

They informed me that the land has been surveyed and looked over to see what the infrastructure would be needed. Some of the Vail connected partners were “in town” last week.

While this has the “feel” of some of the stories of the “New Wolf Ridge” that did and didn’t happen more than once over the last two seasons…we’re really convinced that The Greenbrier will indeed be offering skiing and snowboarding soon enough. Maybe not this season…but soon enough.

I suppose will wait until it is officially announced by The Greenbrier next time around and then share the excitement with you guys then. Until then, we’ll all put the crack pipe down 😉

HERE WAS OUR NEWS THAT WASN’T NEWS – YET!

Remember that you heard it here first people! An announcement is expected to come out of southern West Virginia on Thursday, September 4th, that The Greenbrier Resort in White Sulpher Springs will be building a trail system on its property for skiing and snowboarding.

There are MANY unknowns at this time such as whether or not it will be open to the public or a private resort.

…BUT THIS IS GOING TO HAPPEN…

The number of trails and lifts are not known at this time, but the system will be located on the resort’s property known at Kate’s Mountain.  Sources say that an announcement will also be made of a working partnership between The Greenbrier and Vail Resorts which tends to make us think that the resort WILL BE a “Stay and Play resort” open to paying customers.

Jim Justice, the owner of The Greenbrier also owns Wintergreen Resort in Virginia, which he put on the market about eighteen months ago. That resort has not found a buyer as of yet. The Greenbrier is the site of the annual Greenbrier Classic a PGA Tour Golf Tournament held every July.

Billionaire Jim Justice is the 63 year (going on 50 and refreshingly grounded) Greenbrier owner who recently gave the New Orleans Saints a lavish training camp – JUST because he loves the Saints. In fact, he loves them so much that he spent $30 million of his own money to build the two natural grass practice fields and one synthetic field in addition to a 55,000-square-foot building with kitchen and dining facilities, meeting rooms, weight and locker rooms, training and physical therapy accommodations.

The addition of ski and snowboarding trails to Greenbrier is not exactly brand new news as we’ve heard talk for a couple of years, and there was some expectations of an announcement of that sort has been in the works for some time according to our source. However, things seem to be moving ahead at light speed now (as with everything that Justice gets involved in) and the official announcement is now expected to break on Thursday. 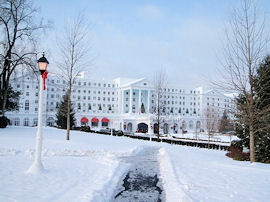 < The Greenbrier Resort Gets Plenty of Natural Snowfall

While we don’t have all of the specifics, we’re told that the trails will be built on what is known as “Kate’s Mountain”. It hosts the highest of the peaks within the Greenbrier State Forest at 3,280 feet. While that elevation is slightly lower than that of nearby Winterplace Resort, those who drive the I77 to I64 interstates will attest to the fact that this area gets quite a bit of snow and colder temps than nearby Lewisburg. I can’t tell you how many times I’ve seen no snow on the ground until you hit around Ghent, WV and Winterplace…and then heavy snow at that I77/I64 junction…which is only a short drive to Kate’s Mountain and White Sulpher Springs.

My first thought is that the new offering from The Greenbrier might be something akin to an AWESOME, luxurious, four-season resort THAT HAPPENS TO HAVE SOME SKIABLE TRAILS. Picture a steroid version of the old Hound Ears Club in Boone/Blowing Rock or perhaps something close to The Homestead Resort in Hot Springs, Virginia where there are SO MANY AMENITIES that skiing sometimes seems to take a back seat.

“Not so” allows our source. This undertaking at Greenbrier will have some ties or partnership with Vail Resorts. Vail doesn’t get involved unless there is a strong focus on the winter product.

So let’s see what the announcement from White Sulpher Springs reveals tomorrow and we’ll report and you guys can chime in. I don’t know about you guys, but there’s no question that adding another ski and snowboarding resort that is within 3 hours of Charlotte and a lot of North Carolina,  Virginia and West Virginia will be a popular offering for snow lovers around the Southeast and mid-Atlantic.

Chime in with your thoughts aand comments by email me at: [email protected]

MORE ABOUT THE GREENBRIER

Located in White Sulphur Springs in the Allegheny Mountains of West Virginia, The Greenbrier has been welcoming guests since 1778. Known as “America’s Resort,” it encompasses more than 10,000 acres of undulating landscape that includes: five golf courses (including the exclusive Greenbrier Sporting Club’s private course); a championship indoor and outdoor tennis facility (including five outdoor clay courts and five indoor courts); a mélange of sporting activities; shops; private homes at The Greenbrier Sporting Club; and, at its heart, a vast and imposing grand hotel.
Purchased in 2009 by West Virginia entrepreneur James C. Justice II, The Greenbrier has undergone a $250+ million restoration and is now home to The Greenbrier Classic, a PGA TOUR, FedExCup event, and will soon launch The Greenbrier Medical Institute, a state-of-the-art medical complex on the resort’s grounds.