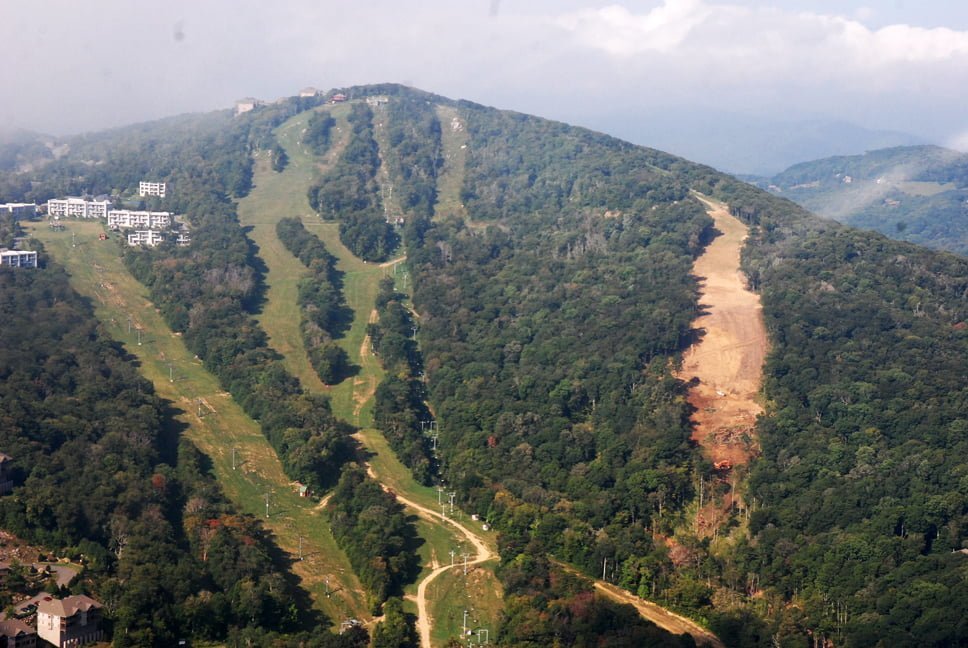 The more I hear input from friends about Sugar Mountain President, Gunther Jochl – the more I think I really like this guy. 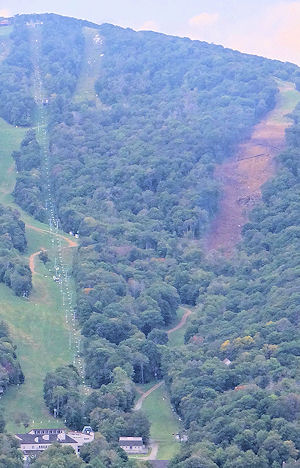 A View of Sugar Mountain from Seven Devils this morning.

Recently a close, mutual friend of “the mountain” and SkiSoutheast and I were talking about the new ski and snowboarding trail that is debuting at Sugar for the 2014-2015 season. For those unaware, the new trail will add about 10 acres of skiable terrain to Sugar’s previous 115 acres (now 125).  The trail will be an advanced slope that is being built on the upper west side of the mountain. 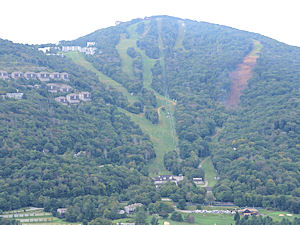 If you’re on Hwy 184 looking at the “face of Sugar”, the new trail will be visible on the far, right side of the mountain. It will begin at the major corner of “Switchback” just as it turns below North Ridge. The wide new slope averages 150 feet across and from what we can see (and what we’ve been told) there will be some dramatic drops as well as gradual decents along its more than half mile run. The 700′ vertical will drop from Switchback down to the base of the Terrain Park slope above Easy Street.

THIS IS YOUR GRANDMOTHER’S SLOPE

Now that I’ve helped to announce the new slope, let me get to the more interesting part of the story. As we’ve been made to understand it, Gunther began soliciting names for the new slope from friends and employees. Gunther was leaning towards doing something special for his mother by naming the new trail after her. The idea was discussed and the name “Oma’s Slope” was considered. All of Gunther’s family calls his mother “Oma” – which is a term of affection for grandmother in German.

Some time passed and Gunther’s wife, Kim Jochl, who also serves as Director of Marketing for Sugar Mountain and who is ALSO the former, nine-time member of the U.S. Alpine Ski Team, had ideas that began to formulate in her own mind. As the story goes, she went up on the mountain and hiked the new slope/trail and saw how incredible the views were (including a nice view of Grandfather Mountain) and she began to think that another name might be more appropriate – “Gunther’s Way”.

She also had been considering renaming what has been “Big Red” so she formulated the idea of renaming Big Red to become “Oma’s Meadow” (much better than Oma’s Slope or Big Red) and to name the brand new trail “Gunther’s Way”.

As with ANYTHING to do between husbands and wives (in business together or not) she needed to convince Gunther. Evidently Gunther had previously stated that he didn’t want to name slopes after people.

According to our mutual friend, Kim thought about not telling Gunther (and surprising him) going forward on her own and ordering the new signs and updating their brochures, etc. However, after some thought she sprung the idea on Gunther suddenly over dinner. Instead of his usual quick response of “yes or now” he went silent. Eventually he expressed his appreciation for the kind thought and gesture for HIM and his mother but responded to say that he just wasn’t certain that this was something he would want to do.

Personally – that was the part of the story that I really appreciated. I could only imagine how uncomfortable I’d be with idea. The idea that he had a lot of difficulty accepting the idea makes me really appreciate the guy more.

Eventually, after some convincing he agreed to it and the truth is I don’t think anyone in the industry probably deserves the honor anymore than Gunther Jochl. He’s always reinvested heavily in the mountain and the community and most often those investments go largely unnoticed. He’s been given more grief than he probably deserves (even by your’s truly over the years) from time to time over being a bit unyielding when it comes to the business of the resort. However it is also that unyielding trait that makes him as successful as he is at running the largest ski resort in the state.

Gunther has honored long term employees and friends of the mountain in the past such as Dick Trundy, who was a decorated Marine Corps General and aviator who served as Sugar Mountain Ski Resorts Director of Operations after his retirement from the military. Shortly after Trundy passed away in 2002 from cancer, he was honored with one of the Village of Sugar roads being named after him and Sugar hosts The Dick Trundy Sugar Cup giant slalom competition which raises money for the American Cancer Society in Trundy’s memory.

For Gunther it was evidently going to be uncomfortable to have a slope named after him. However KUDOS to Kim for convincing him otherwise. Gunther deserves a legacy and to receive some honor and recognition for his long tenure and service to the industry and to the communities of the High Country. Gunther’s young enough (61 years of age) to be with us for decades to come, but it’s kind of cool to think that a milleneum down the road someone will be skiing that new slope and asking themselves, “Who was this Gunther guy?”

Previous Post
(Updated: We Jumped The Gun!) The Home To The Greenbrier Pga Tour Golf Tournament And The New Orleans Saints Training Camp To Open For Skiing???
Next Post
167 Percent MORE SNOW THIS SEASON!!! That’s What Our Buddy Joe Bastardi is Saying!!!