One to Two Inches of Snow Fell in North Carolina and Tennessee; Five Inches Plus in Virginia and Maryland and Up to Eight Inches of Snow fell in the West Virginia Ski Areas!

ASK AND YE SHALL RECEIVE!

A lot of people emailed us about the season snowfall totals on the season. We’ve long been THE ONLY resource where you can find that information for any ski area in the region all season long. For now you can simply go to any resort’s page via SkiSoutheast.com (click the links on the top right of the page) and that information (the 2009-2010 snowfall) will be in the middle column along with the current conditions for that resort.

However as of Monday, we are adding the ability to see that information at a glance to the snow report pages. (Thanks for asking!)

THE BULK OF THE HEAVIER SNOW WAS IN VIRGINIA, WEST VIRGINIA AND MARYLAND…

Meteorologist Brad Panovich had told us earlier in the week that this storm might drop 6-8" of snow in the area and many people doubted him on that forecast. Now that the clouds have cleared and the final tallies are in – some areas indeed picked up 8" of snow! In fact several areas did. Snowshoe, Canaan and Timberline all saw 8" or more snow; Wisp picked up 4" and Massanutten and Wintergreen in Virginia picked up 6" or so of snow.

The resorts further South into Tennessee and North Carolina only saw 1-2" of snow. The system just kind of pushed through the southern portions of the region and then kind of hung around further north. Areas like Canaan Valley and Timberline have now seen 21" of snow on the season, whereas resorts into North Carolina like Beech and Sugar have received 5" thus far. The cool thing for the Virginia ski areas is that they picked up more snow from this storm than they saw most ALL of last season. The great news is that resorts have been able to make a ton of snow and things look GREAT for today for those that are open.

Let’s get to the tour of the region and you guys can check back later for some updates, videos and more photos and trip reports.

13° – Canaan Valley and Timberline Resorts picked up 8" more snow on top of the 1.5" from the 24 hour period prior to Saturday. That takes them to 21.1" on the season! That information is coming direct from David C. Lesher of Canaan Weather in Tucker County. We have to give special props to David! Man we HAVE to get reporting like this for every ski area! Check it out: http://canaanweather.4t.com/

Canaan Valley plans to open December 11th and with these kinds of early conditions – wow! Canaan is reporting one foot of snow in the last 24-48 hours. The official is good enough so we’ll leave it at that.

10° – Snowshoe Mountain received another 7" of snow from the storm and added to the 1" previously reported, they saw 8" of new snow and made a bunch as well. We noticed Snowshoe went back to the two number base reporting system and they are reporting a base of 16-26" and eleven slopes open as well as 3 beginner terrain features in the Powdermonkey Terrain Garden area.

Laura Parquette writes, "For now there are 11 trails open between Snowshoe and Silver Creek, which is among the most open terrain on the east to date. Today’s conditions of packed powder are worthy of a drive, so get in your car and get up here!"

Snowshoe has now seen 19" of natural snow on the season!

23° – Ober Gatlinburg received their first measureable snowfall of the season and they are making snow says Marketing’s Kathy Doyle. They have to be stoked to see 23° readings this morning. Those were scarce last season. Ober will be open before you know it! They are making snow although that isn’t being reflected on several reporting services out there. Ober received 1" of natural snow. 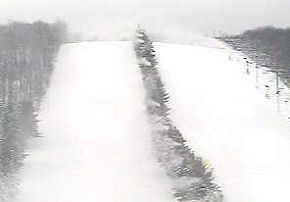 <Wisp’s making snow this AM!

20° – Wisp Resort – They are reporting 4" of new snow although two official snow measuring reporters are reporting 2.5" officially. We’ll check that with Lori Epp from Wisp when we get a chance. Regardless, that takes them close to 10" on the season and they are making snow as well! We should get an opening date soon. Some reporting services are reporting that Wisp is not making snow. That is incorrect.

18° – Winterplace began making snow a week or so ago but with the temps in the teens and 5" of natural snow, they are looking nice for a tentative opening date of December 11th according to the young lady I spoke with this AM. (Hope that cold gets better!)

17° – The Homestead’s Matt Fussell just updated us that they had made 1.5 FEET of snow in the last day or so and picked up 5" of natural snow to take them to 7" on the season. They’re not certain when they will open just yet but it will be soon that you’ll see some people riding their 5 trails. 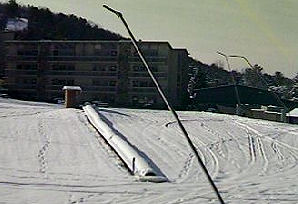 Bryce Resort made snow last night! Image is from LIVE cam this AM>

27° – Bryce Resort picked up 4" of snow before most of it melted due to it being a wet snow according to three different reports. They also made snow but are not doing so as of this report. They are planning to open December 12th.

18° – Appalachian Ski Mountain – 1.5" of new snow – They open today for DAY and NIGHT Skiing! The slopes were groomed for the first time this year at 4am. Due to the very limited amount of snowmaking weather, snowmaking may be in progress for part of the day. Substantial snowmaking has also begun on Strudel, Appaljack, Orchard Run, and Appal Jam. These slopes could be open with another night of snowmaking.

Brad Moretz stated, “Our substantial snowmaking improvements over this summer and the past several years have allowed us, for the first time ever, to open with only one night of snowmaking.”

To add to the excitement of opening day, free tickets are offered to the first 100 guests. All other guests will enjoy the 48th Anniversary Weekend $5 ski ticket pricing for the day session only (9am-4pm). For App Terrain Park enthusiasts, Appalachian will host a free Rome Pre-Jib Event, and several park features will be set up.

22° – Cataloochee Ski Area – 2" of new snow – They will be open with a crazy 12-30" base and 9 of 16 trails available for day skiing only on Sunday! Don’t forget that you can ski free today at Cataloochee and help a great cause! Cat’s 8th Annual Can- U-Ski Food and Coat Drive. In conjunction with Haywood Christian Ministries, Cataloochee Ski Area seeks to help with this year’s increased need for food and warm winter coats for special families throughout our region. All they ask is that all Cataloochee skiers and snowboarders bring at least 10 cans of food or a winter jacket of any size that is in good condition to the ski area on Sunday and you will receive your lift ticket on that Sunday for FREE!

Note: A few people emailed us with snow reports from Maggie’s higher elevations reporting 2" of snow and that jives with the Community Collaborative group’s official measurement. Cat’s website is reporting 6" of snow and we think that is a typo. 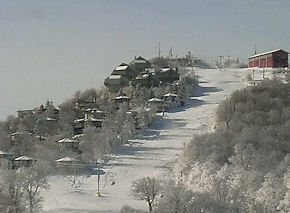 <Beech Mountain Resort this AM looking at Upper Shawneehaw which should open this week!

14° – Beech Mountain Resort – 2" of snow from the storm that also has allowed Beech to blast the hill with manmade snow! They will be open up to LOWER Shawneehaw today and will open more soon. Talia Freeman wrote, "Mike, we had a great opening day! Thanks to mother nature, we had some natural snow fall to add to our snowmaking efforts. Tonight and Tomorrow we will spend sometime grooming, and hopefully open to the top very soon."

Talia shared that she is dealing with groups this season at Beech and among her first groups was a "Swingers" group and she wasn’t talking dancing! Yikes. If the guys on the messageboard had heard about that one!?!?!

We were up at Beech on Saturday and I was trying to take some video and photos, and I thought about posting one as Photo of the Day but you guys would have thought that it was an error, because it would have appeared to have been a blank white screen. At times you could not see ANYTHING but white. The 2" that Beech is reporting jives with our on snow assessment as well as the Community Collaborative measurements. Great reporting Beech!

15° – Sugar Mountain – They are now OPEN TO THE TOP and received 2" of snow from the storm. That takes them to 4" on the season and that jives with Dr. Ray Russell’s numbers as well as the Community Collaborative numbers. Sugar is reporting a base of 10-30". I’m sure they have that somewhere, but there was a lot of brown showing at the bottom of the hill late on Saturday and we’re thinking that those spots are not buried under 10" of snow this morning. We have to tell you though that there was some snow at least a foot deep up top at the three-quarter station mid day Saturday! We filmed a good bit up there and we’ll share that with you guys in a bit. We’ll go on record to report that Sugar’s 10-30" is a bit high…but conditions will be awesome Sunday compared to just a couple of says ago.

21° – Wolf Laurel Ski Resort – We had reports that Wolf was making snow then wasn’t, then was. Well they DID start on Saturday and they are making snow this AM as well and will as long as temps allow. No word as to when they will open just yet.

23° – Sapphire Valley Ski Area is making snow now for the first time this season and they received a TRACE of snow. Both of those facts are missing from this morning’s SSAA ski report. They hope to open soon but according to Gloria at the recreation center, they are watching the potentially heavy rains expected Tuesday of this week with a concerned eye.

14° – Hawksnest Tubing Park and Zip Lining – They are making snow but will not operate today. Chances are they will be open this week.

Be sure to click over to www.SkiSoutheast.com  to see who else had snow and how much! You can check the snow reports for all of the ski resorts of West Virginia, Virginia, Maryland, Tennessee and North Carolina via https://www.skisoutheast.com/skireports.php  as well as videos, photos and more.