Update: 10am: Up to 8" of new snow fell in some portions of the Southeast and Mid Atlantic.  Visit SkiSoutheast.com for more information.

Well the snowstorm didn’t lay down the 4" of snow around the North Carolina Mountains that we were hoping for but the temperatures really nosedived last night and snowmaking was in full bore. It looks like 1-2" of natural snow was the norm from this storm as that tally was reported by Beech Mountain, Hawksnest, Wolf Laurel and Cataloochee.

We’ll update you with some Trip Reports, photos and videos later today so check back!

Here’s the tour this morning around the state.

18° – Appalachian Ski Mountain – 1.5" of new snow – They open today for DAY and NIGHT Skiing! The slopes were groomed for the first time this year at 4am. Due to the very limited amount of snowmaking weather, snowmaking may be in progress for part of the day. Substantial snowmaking has also begun on Strudel, Appaljack, Orchard Run, and Appal Jam. These slopes could be open with another night of snowmaking.

Brad Moretz stated, “Our substantial snowmaking improvements over this summer and the past several years have allowed us, for the first time ever, to open with only one night of snowmaking.”

To add to the excitement of opening day, free tickets are offered to the first 100 guests. All other guests will enjoy the 48th Anniversary Weekend $5 ski ticket pricing for the day session only (9am-4pm). For App Terrain Park enthusiasts, Appalachian will host a free Rome Pre-Jib Event, and several park features will be set up.

22° – Cataloochee Ski Area – 2" of new snow – They will be open with a crazy 12-30" base and 9 of 16 trails available for day skiing only on Sunday! Don’t forget that you can ski free today at Cataloochee and help a great cause! Cat’s 8th Annual Can- U-Ski Food and Coat Drive. In conjunction with Haywood Christian Ministries, Cataloochee Ski Area seeks to help with this year’s increased need for food and warm winter coats for special families throughout our region. All they ask is that all Cataloochee skiers and snowboarders bring at least 10 cans of food or a winter jacket of any size that is in good condition to the ski area on Sunday and you will receive your lift ticket on that Sunday for FREE!

Note: A few people emailed us with snow reports from Maggie’s higher elevations reporting 2" of snow and that jives with the Community Collaborative group’s official measurement. Cat’s website is reporting 6" of snow and we think that is a typo.

14° – Beech Mountain Resort – 2" of snow from the storm that also has allowed Beech to blast the hill with manmade snow! They will be open up to LOWER Shawneehaw today and will open more soon. Talia Freeman wrote, "Mike, we had a great opening day! Thanks to mother nature, we had some natural snow fall to add to our snowmaking efforts. Tonight and Tomorrow we will spend sometime grooming, and hopefully open to the top very soon."

Talia shared that she is dealing with groups this season at Beech and among her first groups was a "Swingers" group and she wasn’t talking dancing! Yikes. If the guys on the messageboard had heard about that one!?!?!

We were up at Beech on Saturday and I was trying to take some video and photos, and I thought about posting one as Photo of the Day but you guys would have thought that it was an error, because it would have appeared to have been a blank white screen. At times you could not see ANYTHING but white. The 2" that Beech is reporting jives with our on snow assessment as well as the Community Collaborative measurements. Great reporting Beech!

15° – Sugar Mountain – They are now OPEN TO THE TOP and received 2" of snow from the storm. That takes them to 4" on the season and that jives with Dr. Ray Russell’s numbers as well as the Community Collaborative numbers. Sugar is reporting a base of 10-30". I’m sure they have that somewhere, but there was a lot of brown showing at the bottom of the hill late on Saturday and we’re thinking that those spots are not buried under 10" of snow this morning. We have to tell you though that there was some snow at least a foot deep up top at the three-quarter station mid day Saturday! We filmed a good bit up there and we’ll share that with you guys in a bit. We’ll go on record to report that Sugar’s 10-30" is a bit high…but conditions will be awesome Sunday compared to just a couple of says ago. 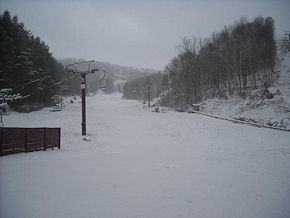 21° – Wolf Laurel Ski Resort – We had reports that Wolf was making snow then wasn’t, then was. Well they DID start on Saturday and they are making snow this AM as well and will as long as temps allow. No word as to when they will open just yet.

23° – Sapphire Valley Ski Area is making snow now for the first time this season and they received a TRACE of snow. Both of those facts are missing from this morning’s SSAA ski report. They hope to open soon but according to Gloria at the recreation center, they are watching the potentially heavy rains expected Tuesday of this week with a concerned eye. 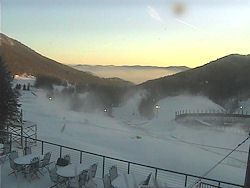 Hawksnest from this morning! (anyone else miss the heck out of that ski area?

14° – Hawksnest Tubing Park and Zip Lining – They are making snow but will not operate today. Chances are they will be open this week.

We have a LOT more to share, so be sure to check back for updates later in the day and click over to SkiSoutheast.com for more. See below

Be sure to click over to www.SkiSoutheast.com  to see who else had snow and how much! You can check the snow reports for all of the ski resorts of West Virginia, Virginia, Maryland, Tennessee and North Carolina via https://www.skisoutheast.com/skireports.php  as well as videos, photos and more.

Previous Post
The 82nd airborne division of Fort Bragg was at Beech Mountain Resort on Saturday! Photo by Brad Patton
Next Post
Up to EIGHT INCHES of Glorious, Beautiful SNOW Fell December 5th, 2009