Tranquil and Mild Thursday On Tap

It is a tranquil Thursday as we get ready for another mild day. However, change is coming.

I feel like I am stuck in the spring version of the movie Groundhog Day as there hasn’t been much change this week and the weather has been nearly a carbon copy of the before.

Change, however, is coming with cold arriving late Saturday and into the Christmas week.

In the meantime, we will deal with a couple more spring-like days with some underdeveloped snow tonight and potentially on Saturday.

Once we can get this mild spell over, hopefully, we can get the pattern to flip to the cooler side of things. (#ThinkCold)

Despite the warmish temperatures, the slopes have held up remarkably well as there is plenty of snow to play on as we slide into the weekend. With some snowmaking windows over the weekend and next week, things will be really nice for the holiday week.

There are six resorts open for play today. Here is a quick look at the conditions at the open resorts.

App Ski Mountain – The Blowing Rock resort is holding steady with seven trails and five lifts in operation today. They have a groomed surface with a 15-37″ base.

Ice skating has reopened and App is offering night skiing.

Meadowbrook Inn is a tranquil mountain retreat located in the heart of the Blue Ridge Mountains in scenic Blowing Rock, North Carolina. Situated one block from the upscale shops, restaurants, and galleries on Blowing Rock's Main Street, they offers a relaxing mountain escape in the midst of some of the High Country's most popular attractions. 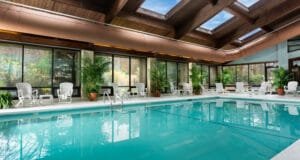 Beech Mountain – Beech is reporting an 18-30″ base with a groomed surface. They are playing on nine trails with four lifts spinning.

Cataloochee – Cat is playing on seven trails serviced by four lifts. They are reporting an 18-22″ base with a groomed surface.

Cataloochee is offering night skiing as they are open until 10p.

Snowshoe Mountain – The ‘Shoe is playing on 74 acres of open terrain with 24 trails and six lifts in operation. They have a 30″ base with a loose granular surface.

Snowshoe added two trails – Singletree and Lower Whistlepunk – to the lineups today, and Silver Creek is set to open tomorrow.

This video off of Widowmaker from Wednesday is pretty sweet.

Sugar Mountain – Sugar is reporting eight trails with four lifts available for play. They are riding on a loose and frozen granular surface atop a 22-62″ base.

Ice skating and tubing are open, and Sugar is offering day and night sessions.

Wisp Resort – The Maryland resort is playing on a groomed and variable surface with a 15″ base. They have five slopes and three lifts in operation.

Tubing and the Mountain Coaster are also open.

For the complete report, be sure to visit the Snow Reports page.

We did receive a couple of updates on opening dates on Wednesday.

Canaan Valley announced that they are delaying their target opening to Christmas Day.

Ski Sapphire Valley has also pushed back their opening from this upcoming weekend with a new target date to be set soon.

Bryce, Massanutten, Timberline, Winterplace, and Wintergreen are set to rejoin (join in Winterplace’s case) the fray this weekend as we head to double-digit resorts open as we head into Christmas week.