It’s All About Timing and Sometimes You Just Get Lucky… 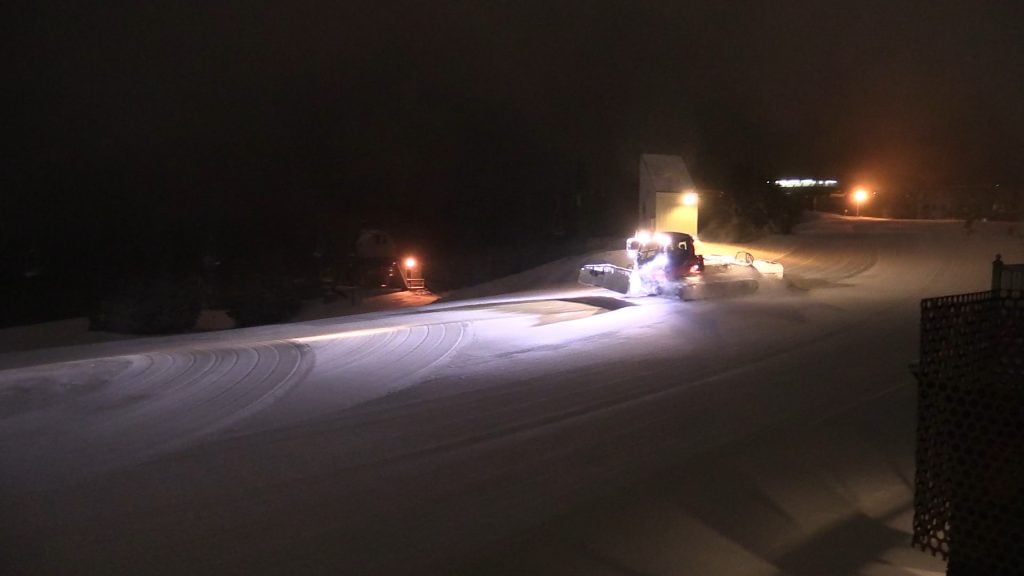 The title of this post could be related to whether you beat a crowd and not have to wait for an hour and a half for a table at a ski resort on the busiest week of the year. It could be related to having everything go right with the weather; and it could be all of the above. I think anyone skiing or riding at any mountain in the Southeast or mid-Atlantic right now will tell you that the conditions are simply awesome. So the timing for everyone taking part in a ski getaway this week has been fabulous.

Sure, I’ve read some of the social media accounts of various resorts where some people are complaining about this or that resort not having a lift open when it’s listed on their snow report. I’ve read a couple of complaints about lift lines at a couple of places.

However, if that is ALL you have to complain about, then it’s been a great ski getaway. As far as timing when and where to eat; when and where to ski and things of that nature – I’ve found that experience is the best teacher. Knowing that you simply can’t wait until 5pm to think about where you want to have dinner goes a long way. Knowing that it isn’t logical to have lunch when everyone else on the mountain is thinking the same thing is also helpful.

I have fourteen people with me on this particular ski trip and I can tell you that things have gone simply amazing. Everyone is having a blast and as a bonus – we’ve even managed to introduce yet another person to the joy of skiing. This will be my fourth introduction to the sport this season. (I’m on a roll and if there were nominations for poster-child of the Learn to Ski and Snowboard Month and/or Bring a Friend to the Slopes…I could be in the early running.

Back to the subject of great timing and luck…we’ve managed to dine out with as many as nine of our group at a time (three times now) with NO WAIT simply by planning ahead and being flexible. We were able to make reservations for snowmobiling for seven of us and we couldn’t wipe the smiles off of everyone’s faces despite the fact that it 12° for the hour-long trek around the mountain. The snowmobiling program here at Snowshoe Mountain is a very popular adventure and it stays booked up this time of year. If we had waited until the last second, we’d have missed out on that fun.

Speaking of that bit of fun last night – I had TRACE APP running and we did seventeen trails and got up to nearly 40 mph a few times. It was pretty awesome and it was great to see my great friends Mikey Valach who is Snowshoe’s Outdoor Adventure & Retail Group Manager. Mikey is the son of Michael Valach who actually started the Outdoor Adventure Program at Snowshoe years ago. It was awesome to see Carter and Billy – with whom I’ve made a few Snowmobile tours with. (They even made it snow for us!)

No kidding, after 5-6″ of snow fell early in the week and another 1-2″ Wednesday…it began snowing pretty hard around 9pm and as of this morning (as far as I can tell) we’ve received another 2″ of new snow and it is still snowing pretty hard as you might be able to see via the capture of the Shaver’s live cam.

So as far as timing is concerned, we could not have had more great fortune to have awesome weather, awesome snow, awesome conditions and great timing with no waits.

I do have to share one little bit of “new” insight. Longtime readers will tell you that I have long suggested that if you were skiing or riding at any ski area on a busy week or weekend like the Christmas-to-New-Year week or MLK Weekend, etc. then the best inside secret is to hit the slopes AT 9am when the ropes drop or the lifts start up. Normally, you can ski or ride until about 10:30 or even 11am with little to no lift lines. W-e-l-l, either the word has gotten out OR there has been so much pent up desire to play in these kind of snowy, pristine conditions that no amount of getting out early is going to make a huge difference.

We’ve hit the slopes precisely at 9am each day and by around 10:00am-10:15am it gets busy on the slopes. By 10:30-11am, the slopes are packed. Even then, the lines aren’t too bad as long as you know your ski area and the habits of the typical skier. In our case, skiing here at Snowshoe has taught me that you can get in all the turns you want from 9am-10:30 or so and then you take a break, grab a bite and a beer (or two) and then you head over to Silvercreek. That’s what we did today and we skied until around 4pm with no more than a five minute lift line once or twice. I spoke with more than a few people Friday night who complained of 20-25 lift lines on a couple of occasions at the bottom of Ballhooter.

To be honest, that’s not bad.

Before I forget it, I was able to make a bunch of turns early on Friday with Joe Stevens and his son Christian. Thirteen year old Christian has become quite a good skier as we made some treks down Skip Jack, Spruce and others and that’s pretty good for a guy that only started skiing two seasons ago. Shawn Cassell of Snowshoe Mountain joined us a bit later and we made a couple of trips down the mountain together. Later in the day I was able to meet up briefly with Rachel Fanning and Heather Ransom of Snowshoe’s marketing and creative team – who do an awesome job of “getting the Snowshoe message out”.

Here is a short compilation of “Five Minutes of Skiing & Riding With Friends”:

Everybody is Talking About the Weather, Snow, Snowmaking and More and More Trail Openings

That seems to be the message at every resort across the region over the last couple of days. While only the Virginia, West Virginia and Maryland Ski areas has seen natural snow this week, every ski resort in the region has been able to BOMB their slopes with as much snow as they cared to make and open more terrain.

On that Subject, Let’s Look at Resort Slopes Open:

Beech Mtn – 11 of 17 trails open, tubing and ice skating. Can’t be long before we see White Lightning and Oz open.

Bryce Resort – 7 of 8 trails open as well as tubing.

Canaan Valley – 20 of 47 trails and snow tubing, ice skating and more. They saw 2.5″ of new snow and now a whopping 36.8″ on the season. Canaan Valley has really seen more natural snow this season than all of the rest of the resorts in the region.

Cataloochee – 100% OPEN with all 18 trails, snow tubing and awesome conditions.

Massanutten – 12 of 14 trails open and 12 lanes of snow tubing as well. Massanutten received about an inch of new snow overnight that will make conditions even sweeter.

Ober Gatlinburg – 6 of 10 trails open, snow tubing and ice skating as well as their mountain coaster and more. Ober’s temps were 34° so snowmaking is OFF right now.

Oglebay – I was all prepared not to mention them here as they only have one slope, but they also picked up 2″ of natural snow…so here we are.

Sapphire – 100% OPEN with both trails and snow tubing on the best base they’ve seen in two years.

Snowshoe Mtn – They lead the region with 178 acres available to play on 43 of 60 trails, snow tubing and terrain parks dotting the resort. Snowshoe is only reporting 1″ of new snow, but it was so wind-blown. One local reader emailed me that he measured 2″ at his location on the Cupp side of the mountain. Snowshoe’s team posted, “Upper Shay’s Revenge is officially open and Mother Nature is giving it a fresh coat this morning! An inch of snow has fallen already and the flakes are expected to fly all day today. Our snowmaking team is already off to great start on Lower Shay’s as well. Watch for it to open by this time next week! If these fantastic snowmaking conditions continue as forecasted, we could have every trail on the mountain open well before MLK weekend. Timberjack is open as a ski trail without park features. Our 11,000 acre backcountry is a winter wonderland right now, and there is no better way to go exploring than an Offroad RZR Tour! Book yours at the Depot today.”

Winterplace – 24 of 27 slopes and tubing is open as well. Snowmaking will be focused on opening more trails Our snowmaking team with be focused on Wood’s Run, Turkey Chute, Almost Heaven and the Hickory Terrain Park. There will be limited daytime snowmaking today on open trails.

Omni Homestead – 6 of 9 trails open. They also picked up about 1″ of new snow according to reports.

Wintergreen – 16 of 24 trails open for day and night sessions with awesome conditions across the resort. 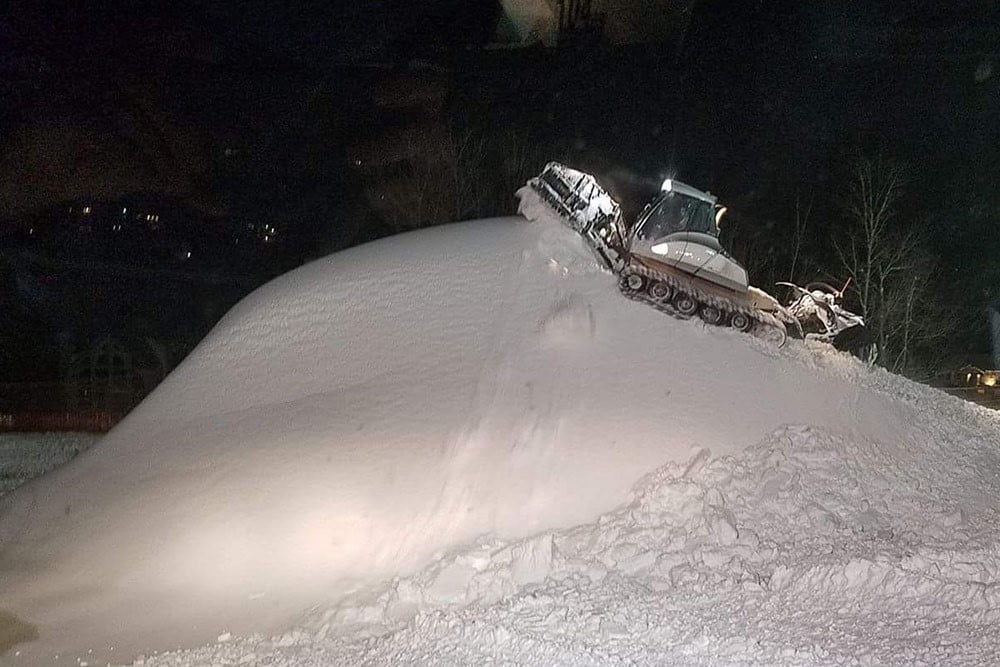 Great image of Wisp showing off a little bit

Wisp – 21 of 34 trails open as well as tubing, ice skating, mountain coastering and more. Upper Eye Opener and Odin’s Chute are anticipated to open soon. They saw another 1″ of new snow.

Wolf Ridge – 11 of 15 trails open and snow tubing and terrain parks are open. Wolf will not be making snow today during open sessions.
If you have anything to share, please do at [email protected] Also join us on Facebook, Instagram and more.