Meteorologist Brad Panovich has posted his newest Skier’s Forecast and it’s another case of the Groundhog Day movie as the trend that we saw all December is continuing into January!

I’m sure than Sarah Davis is reporting about this over on the FirsTrax report this morning but most of the region has seen anywhere from a reported DUSTING of snow at places like Davis, West Virginia to 2.5" of snow over at Mars Hill, NC (home to Wolf Ridge Ski Resort). Beech and Sugar are both reporting about 2" of new snow although the official CoCoRaHs reporter atop Sugar is reporting 2.6". Snowshoe is reporting no new snow this morning.

It has been a pretty snowy winter thus far across the entire region, however the trend from December 1st through now has been such that the Western North Carolina ski area communities have actually received a higher percentage of snowfall compared to average years – than the ski areas into West Virginia and Maryland. To date, the Virginia ski areas have seen a scarcity of natural snows this season compare to average.

That said MORE SNOW is in the forecast and let’s go talk about that a little first and then below the forecast we’re sharing the snowfall tallies from all of the ski areas below and displaying the percentage of snow to date. We think you’ll find it interesting. 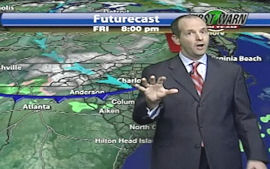 Brad’s Skier’s Forecast Video talks about lots of COLD and SNOW over the next 6-10 days for the entire region. These snow events will make for some AWESOME conditions at YOUR favorite ski hill so we want to recommend that you make plans to hit the mountains THIS WEEKEND and next week for what very well should and could be the best conditions of the season.

2-3" of snow fell overnight in the North Carolina mountains and a TRACE of snow was reported at the West Virginia ski areas. It is sunny right now in most of the mountain communities but we’re expecting those wonderful, Northwest Flow snows to pick up Thursday evening into Friday. Then we’ll see a clipper system that looks really potent as heavier snow should develop later on Friday…with the bigger snows across the region. Most of the ski areas should see some snow from this. We’re looking for 4-6" of snow prior to midday Friday. 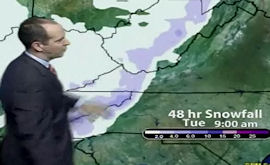 Brad says that the Friday/Saturday snow will be very POWDERY snow with lower moisture content. Yea baby! Brad’s forecasting 6-10" of snow for those of us in the NC mountains Friday into Saturday and perhaps a little more around Snowshoe.

These first two systems should provide some great conditions and THEN Brad is forecasting some MAJOR SNOW for Monday into Wednesday with what looks like right now as a nor’easter! Those of the snow events that usually bring us the deepest snows of the season!

THE SEASON TO DATE! (Bear in mind that we’re only about 30% into the season)

We rank the snowfall totals by PERCENTAGE AGAINST SEASON so far and those that are ahead of schedule are over 30%. 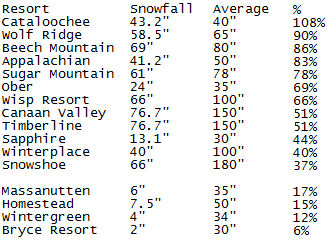 By looking at the numbers above you can almost see the trend in how the snows have come thus far this season. All but the Virginia ski areas are AHEAD of annual snowfall averages. Preseason forecasts predicted that our ski areas would see slightly below average snowfall on the season so this is a major fail by all expect for the Farmer’s Almanac. Brad Panovich was one of the few who qualified his forecast of near normal snowfall totals with the fact that he saw indications that might make for better than what most forecasters were calling for. You can see Brad’s preseason forecast on the video page so we aren’t recreating history like some do.

The great thing is that we’re happy to report that conditions look great at the ski resorts right now and if you haven’t had a chance to hit the mountains yet, THIS would be a great time to pack your bags and head to YOUR favorite!

Previous Post
The Terrain Park at Ober Gatlinburg
Next Post
Snow, Snow, and more Snow now through the Weekend of January 8th!