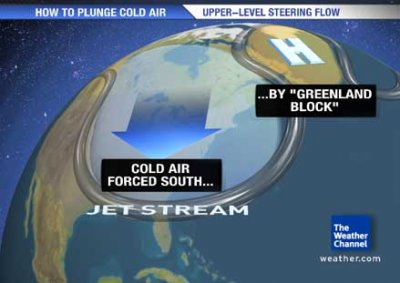 You know, there are two difficult things to do when writing this First Trax article every morning. The first is coming up with a catchy title. The second is trying to stay positive when the weather outlook looks pretty crummy. I have both of those problems this morning.

After today, the weather over the next 3 to 4 days looks to consist of underdeveloped snow across the entire region. I’m not going to say anything other than that because well, it’s depressing. I am going to remind everyone that it’s not even technically winter yet! The winter solstice doesn’t occur for two more days, so right now we are still in fall. There’s been a lot of pessimism on the messageboard about the weather. I think some folks have already given up. I’m still being optimistic though.  It won’t be like this all winter!

I came across an article on weather.com yesterday that was pretty interesting. They gave their updated forecast for the winter. The main thing they looked at when discussing wintry weather for us here on the east coast is something called the Greenland block. I’m sure a lot of you have heard of this as it’s been prevalent the past two winters. In fact, it’s been one of the main weather features that has allowed for so much snowy weather the past two years. Well, so far this year it hasn’t happened. There are some signs though that we could see this change somewhat in January. 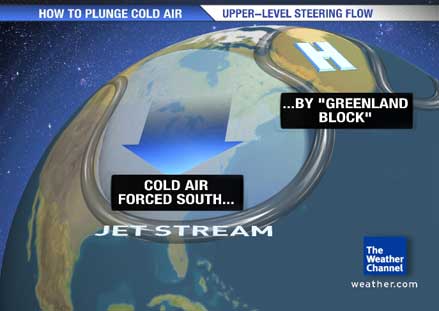 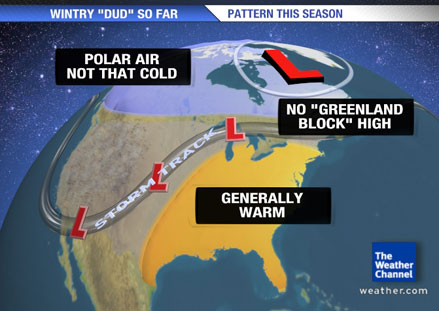 In the short term though, it looks like we will continue to ride this roller coaster that is the weather.  The next couple of weeks look be much of the same as what we’ve already seen this season.  It could be worse though, we could have no snow and no ski areas open!  Heck, even most of the ski areas out west are struggling so far this year.  I saw a trip report on the messageboard yesterday from Alta in Utah, and it looked sub par there as well.  So we’re not the only ones who are off to a slow start!  If it weren’t for the awesome snowmaking operations here in the region, we wouldn’t have anything to ski and ride on.  Be thankful for that!

Looking across the region at the open ski areas this morning, not much has changed in terms of open terrain and what not, with the exception being Snowshoe. Up there, they were able to open an additional 12 acres today, bringing their total open trail count to 25. As they said in their morning comments, that is the most available terrain south of Vermont. Very impressive.

Up in West Virginia, Snowshoe and Timberline remain the only two ski areas in the state to be open. That will change here in the next few days though. Canaan announced on their site that they are definitely opening on Thursday with 5 trails open and 2 lifts running. Tubing will also begin on Christmas Eve up there. Winterplace is still saying they will open on Saturday, weather permitting. Yesterday I talked to someone who works there and it sounds like they are definitely planning on opening Saturday as well.

Bryce, Massanutten, and Wintergreen all are open in Virginia. Who would have thought that Virginia would be the only state with 100% of the ski areas open? Kudos to those guys. Just a quick note, Bryce is offering a special package deal right now where you can ski and golf in the same day. It sounds like it would make for a pretty fun day. The special is good until Saturday and you can read more about it by clicking HERE.

Finally, Wisp remains open for business up in Maryland with tubing and ice skating open as well. The cam is showing some really good coverage this morning.

On a quick note, one thing I’ve noticed this morning when looking at the snow reports is that we’re already seeing a little fibbing going on with base depths and snow conditions. Mike talked about this a little over the weekend. You can’t tell me that packed powder conditions exist when highs yesterday soared into the 40’s and low temperatures overnight were well above freezing with no snowmaking! A few areas farther up north in the region can claim this as temps have been colder there, but for everyone else I’ve put groomed as the primary surface condition on the morning ski reports. A few resorts are also a little over zealous with their base depths right now, but I won’t get into that today.

That’s all for today. Stay positive and think cold and snow!