The FIRST ski area to open for the 2015-2016 Ski and Snowboarding season is…. (drum roll) … Cataloochee Ski Area in beautiful (by God) Maggie Valley, North Carolina. 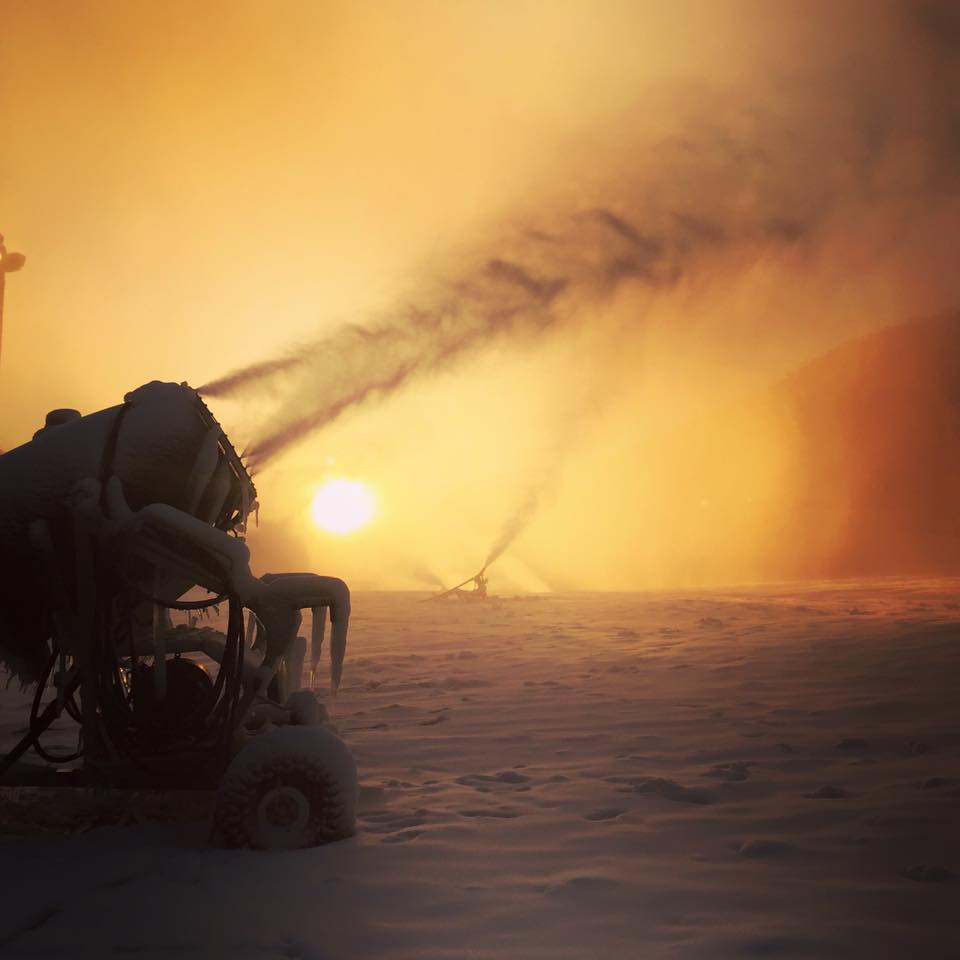 Isn’t that ALWAYS the case with these two ski resorts? They are ALWAYS the first to open and this year is no exception.

I spoke with Marketing Babe (that IS her official title around here at SkiSoutheast land), Tammy Brown and she shared that Cat will operate today with 4 slopes and trails, serviced by 2 lifts for day sessions only Sunday.

I also asked her their thoughts about HOW LONG they will be able to stay open and she replied, “Honestly, Mike, I don’t know. If we can we will stay open. We’ll see what Chris (V.P. and General Manager Chris Bates) says and go from there. 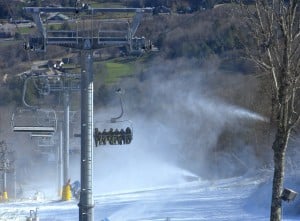 Six pack to go. Seated six across and cruising, some of the Summit Express’ first passengers soar above snowmaking. Photo by Randy Johnson

Over at Sugar Mountain Resort they too are operating for day sessions only today on 4 slopes and trails – from the top of their 1200′ vertical down serviced by ONE lift and in case you’ve been living under a rock OR you’re just coming out of summer hibernation and ready for skiing or snowboarding for the season – that ONE life is Sugar’s new Summit Express lift.

So the 2015-2016 Ski and Snowboarding Season has started with the same two ski areas that start every season – Cataloochee and Sugar.

Sugar is reporting a base of 6-12″ and manmade and frozen granular with some thin areas. Cat is reporting 6-10″ groomed. With the highs expected in the mid to upper 50s today at both locations…look for some thin coverage as traffic pushes the new, manmade snow around.

As to HOW LONG EITHER ski area will remain open – I guess we can speculate with anyone because neither Sugar nor Cataloochee is saying. I really think that they will take it one day at a time. They’ll probably head out early each morning (r-e-a-l-l-y early) and make the call as they see it.

Our guess is really based on looking at the weather forecast and the highs today through mid-week are for highs in the mid-to-upper 50s and lows in the low 40s so there will be no more snowmaking for a week. There’s a chance for some snowmaking NEXT Saturday. It’s anyone guess how long this first batch of 6-10″ of snow will last, but we’re going to say that both ski areas will either operate today and call it an official opening date and NOT operate for the week ahead – OR they may gut it out and open as they can for the next 2-3 days.

We’ll predict the latter as there would be no real advantage for making all that snow and “staying off of it to save it” as the temps will melt it anyway. So we’ll go with – check back each morning for the updated snow report, but we think that this early opening will only last 2-3 days at most. The ground beneath this early base was/is warm and that too will contribute to the quick base deterioration.

The long range forecast looks pretty frustrating for this week ahead but things DO look borderline for snowmaking beginning next weekend. We could see overnight snowmaking Saturday through each night for the following week. Again, it will be borderline each night, but we could see resorts making snow at least SOME of those nights.

SNOW SHOWERS are actually in the forecast Wednesday, November 25th through Sunday, November 29th…but again the temps are borderline so it could be a rain/snow mix. 10 day forecasts are still only about 20% accurate, so check back as we get closer.

If you’re one of the early-birds to hit the slopes today, get us a photo or video.

In the interim, check out this short snippet that Cataloochee put together and check back later as Randy Johnson will provide us with some video from yesterday’s Sugar celebration.

Until tomorrow…email me at [email protected]