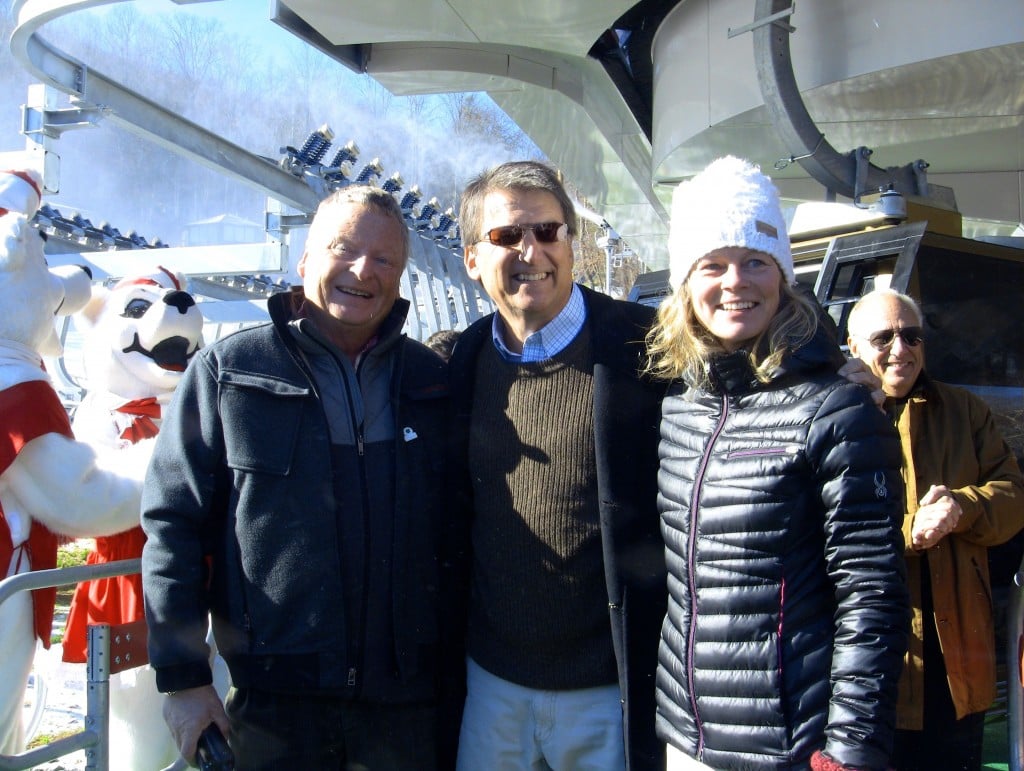 With a mile-and-a-half run from the summit under glistening white snow, Sugar Mountain cranked up its new six-person detachable chairlift on Saturday to dedicate the South’s biggest ski improvement for 2015-16.

Just days before the release of a new report on the economic impact of skiing in North Carolina, Governor Pat McCrory braved the breezy sub-freezing temps to cut the ribbon on Sugar’s high-tech Doppelmayr “six-pack.” Michael Doppelmayr, CEO of the Austrian lift company, was also on hand to watch his state-of-the-art space ship like lift take flight.

The crowd moved outside the base lodge to gather at the loading ramp of a lift Doppelmayr called “one of the most sophisticated ski lifts in the world.” With a blue ribbon stretched across the platform, McCrory huddled with Gunther Jochl and wife Kim Jochl, a huge pair of scissors was produced, and the ribbon dropped to loud cheers.

The chairlift was specially equipped with one enclosed gondola-style cabin like the kind so often seen in Europe. The VIPs stepped in out of the cold and rocketed to the summit.

The brief rousing ride to the top and back down (the slopes didn’t open) was punctuated with hoots and hollers. The lift tops out to stunning, never-before-seen vistas from higher atop Sugar’s summit.

The crowd moved inside for brunch. Jochl gave season passes to the VIPs. McCrory took his quipping, “On behalf of the state of NC, I accept this.”

Jochl called reconfiguring the lifts “a long job that turned out well.” He called skiing an important part of the economy of the High Country. “It effects everybody and everyone looks forward to when the skiers return. Our investment this summer is not just good for us, but it lifts everyone.”  Jochl thanked his staff for their hard work and wife Kim.

Taking the mic, McCrory said it was great to know Gunther and Kim. “She was an Olympic skier,” he said, “and Gunther, a great skier from Austria. I am so glad you made North Carolina your home.” He praised the multi-million dollar investment made by Gunther, Kim, and their partners.

McCrory emphasized the collegial side of competition among High Country ski areas, citing Gunther Jochl as someone who knows that improvements at one ski area help attendance at all nearby slopes. “He believes in synergy, it’s not just about Sugar Mountain,” McCrory said. “There’s a synergy, even with competitors. If we have high quality facilities, that helps everyone. Our new state motto is ‘North Carolina: Nothing Compares.’ Nothing compares to North Carolina, and nothing compares to Sugar Mountain.”

That kind of good will was flowing. Jim Cottrell of French-Swiss Ski College, based at Appalachian Ski Mountain, said, “The new lift and the governor being here is great publicity for the entire ski industry. I’m an industry thinker and what’s good for skiing is good for me. I haven’t been excited in a long time—and this is exciting!”

The governor revealed that he “first skied at Sugar in 1976 as a teenager. A former friend of mine took me to the top of the mountain where my first fall was off the chairlift. Then I made a mistake and took a left down the expert terrain.” On his second run, McCrory “found the trail to the right, and that’s where I fell in love with skiing.”

Michael Doppelmayr’s associates passed an Alpine-style cowbell around the room, loudly ringing-in the new lift. Doppelmayr first seemed surprised and said he had no idea what was happening. “I do,” McCrory confessed to laughter. “My security checked it out.”

The bell was presented to the Jochls with Doppelmayr saying, “Like all over the world, Gunther paid for the lift, and Kim is going to get the bill.”

The new chair follows up last winter’s successful opening of Gunther’s Way, a new slope that is at the heart of this season’s upgrades. Many people are calling it the best ski run on the mountain and one of the best in the region. The Summit Express expands capacity and chops ride time to the top to five minutes, but it also replaces two existing double chairlifts to the summit. One will still reach the peak—but it’s been relocated, renovated, and renamed the “GW lift” as it launches from the bottom of Gunther’s Way. That will make it super easy for advanced skiers to yo-yo the upper mountain expert terrain. For beginners and intermediates, the other summit chair has been refurbished and shortened, giving skiers a third lift dedicated to easier terrain at the bottom of the mountain.

For months, anyone driving by Sugar and looking up has been wondering how it would all work. For the first time, today’s event brought Gunther Jochl’s vision into sharp focus. Just stepping onto the summit amidst the reconfigured lifts makes it instantly apparent—this is a new Sugar Mountain.

If you’re tempted to shed a tear for Sugar’s old summit lifts—console yourself by taking home a souvenir chair. For $150 a piece, skiers wanting a distinctive lounger for the deck can buy a bit of High Country ski history.  (828-898-4521 x261 for details).

Previous Post
Cataloochee to Open on Sunday!
Next Post
The FIRST ski area to open for the 2015-2016 Ski and Snowboarding season is…. (drum roll) … Cataloochee Ski Area in beautiful (by God) Maggie Valley, North Carolina.