The First Possible Closures of the Season…

Like Mike did yesterday, I’m going to start off here with some shameless promoting.

The 5th Annual SkiSoutheast Summit at Snowshoe Mountain is next weekend! Come join us. 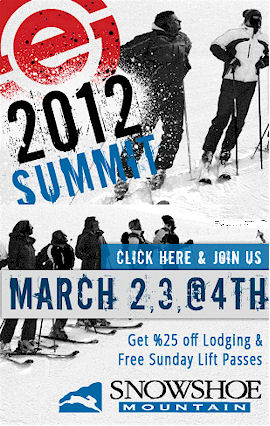 Looking at the forecast, it appears as if Snowshoe should be able to make snow a few nights this week. They are already looking GREAT with 57 of 60 trails available – that means that we should have some pretty awesome conditions for the three day winter celebration. It might be a little wet on Saturday, but I’m not letting that deter me and you shouldn’t either.  Things haven’t been as awesome as we’d all like this winter, so if you’re reading this from down off the mountain in your home town – where it’s nearly 60°, do us a favor and tell your buddies that we have plenty of snow at all of the ski areas and that we’re in for a super weekend next weekend.

Snowshoe is giving YOU and anyone else that will come and hang out with us 25% OFF all lodging as well as a FREE Sunday Lift ticket. We’re doing a FREE Apres Ski Party Saturday night and we’re adding some fun to the plans as well as giving everyone who comes a FREE SkiSoutheast 2012 Summit Tee shirt. So jump over to the SkiSoutheast Summit pages or the Messageboard and join us. Being a MEMBER of SkiSoutheast and SkiNC is FREE and membership DOES have its privileges!

Go look and sign up to JOIN US!
https://www.skisoutheast.com/2012_SkiSoutheast_Snowshoe_Summit.htm

If you haven’t made plans to attend yet, you should. This is shaping up to be one of the final few weekends of the season. It is almost March now and things are beginning to wind down. Conditions at several places are still really, really good. However, I’m sure a lot of people are already looking ahead to spring. Heck, Beech is already promoting mountain bike stuff. I wont lie, I enjoyed the 70 degree weather down in Charlotte on Friday. I was driving out to Lake Tillery with my sunroof open. It was nice.

We’re seeing two ski areas begin their late season hours, meaning they will not be open during the week. Wolf Ridge is closed today through Thursday. They will re-open on Friday for the weekend, weather permitting. They haven’t made snow in a couple weeks now and this really comes as no surprise to people who know the place. Honestly, I wouldn’t be surprised if they close up shop for the winter after this weekend.

Down in the southwestern portion of North Carolina, Sapphire Valley is open from 5pm-9pm tonight and they will be closed for the rest of the week. They don’t have a re-opening date posted on their site, so tonight could possibly be their final day of skiing and riding of the season.

It’s definitely been a challenging winter. One of the big reasons why it’s been milder than normal is that the North Atlantic Oscillation (NAO) has been in a positive phase for pretty much the entire winter.

As you can see, it’s rarely been negative since the beginning of November. When the NAO is negative, it means there is a huge dome of high pressure over the North Atlantic which causes the jet stream to buckle and colder air funnels down the east coast of the US. It also causes low pressure systems to meander in the region for longer. A lot of the cold, snowy weather over the past two seasons can be attributed to this.

It’s been quite the opposite of that this year though.  Blocking has rarely occurred and colder temperatures haven’t stuck around for long periods of time. That’s why we’ve seen so many cycles this year where it gets cold for a few days and then it becomes mild for a while.  It’s been a roller coaster to say the least.

It’s a good thing that the ski areas have invested so much money into snowmaking. I’d hate to have lived during the 70’s or 80’s during a winter like this. I’d probably only have a handful of days of riding under my belt. Sometime this week if I get time I’m going to check out snowfall statistics from this year and compare it to historical averages and what not. It’s definitely been a down year, but I’m wondering if it’s as bad as what some people are saying. I think the fact that the past two seasons saw dump after dump just makes it seem that much worse.

All of the negativity aside, there is still a ton of fun to be had at the resorts. Because of those huge investments in snowmaking, conditions are still pretty good. It really is pretty amazing to see how much snow is on the cams with the weather we’ve had this year. Those windows of snowmaking that we’ve seen have been just enough to allow for the resorts to lay down a ton of snow. Base depths might be a little exaggerated at some places, but there isn’t too much in the way of brown spots right now. As has been the case all year, West Virginia continues to lead the way in terms of open terrain and snow conditions. It’s not too shabby at all though in Virginia and here in NC either. We still have 3-4 weeks left so get out and enjoy it while you can…especially this coming weekend at Snowshoe!

Previous Post
Click to see additional information and JOIN US for the 5th Annual SkiSoutheast / Snowshoe Summit March 2,3,4th – get 25% OFF Lodging and FREE Skiing!
Next Post
More Shameless Promoting and Funky Temps This Morning