The Final Hump Day of the Season

I’ve noticed this week that I’ve been way more lethargic when writing this article in the mornings. You’d think it would be the opposite since I’ve started coming in at 8 now instead of 7:30 but nope, that’s not the case. I think it has something to do with it being the final week of skiing and riding. It is just bumming me out.

It really hit me last night that my season is maybe over. I was leaving App and all of a sudden as I was walking off the snow I turned around and realized that it will be almost 8 more months before I get to snowboard again. I had to take in that one final glance at the mountain. It sounds cheesy but I am definitely going to miss it. It will take about 2 weeks before I am already wanting to get on the snow again. I’ll just have to get my fix by skating/trikking I guess.

I say all of this yet I might head back out to App on Thursday. I’ll see what the weather today does to the snow. It was pretty slushy out there and there was some dirty and bare spots but riding park is so fun. App still has a good amount of features to play on and I’m not the greatest park rider, so learning stuff is fun this time of year because when I fall (and I do a lot) it doesn’t hurt that bad.

Getting to the weather, late today and tonight is looking pretty nasty. Some storms are going to be passing through the entire region, making for some less than desirable conditions to ski and ride in. Behind the cold front though is come colder weather. Snowshoe is actually expected to pick up a few inches of snow tonight and tomorrow. High temperatures up there throughout the weekend are only in the mid 30’s. That should make for a really good final weekend of riding up there. 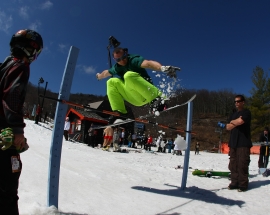 <<<Events like the High Ollie Contest will be a part of App’s Meltdown Games this weekend.

It also might get cold enough at App to make snow tomorrow night. It’s looking borderline though right now. Either way, it’s not going to be nearly as warm there for the final weekend of riding as it has been over the last week or two. The snow will be able to harden up some overnight, and it won’t get as mushy during the day. They are going to be having their Meltdown Games this weekend as well, so it will be a good way to end your season.

As I mentioned yesterday, Sugar Mountain is ending their season today at 4:30. They will be having their annual Burning of the Snow immediately afterwards. There will also be some live bluegrass music to enjoy while you chow down on some hot dogs and drink some beer. It should be a good time.

That’s about all for today. Here’s a look at the ski areas…

Appalachian Ski Mountain – 61°- Open on 9 of 12 trails today with a groomed surface. As I already mentioned, I was out there last night and conditions were pretty decent considering the weather. This weekend they will be holding the Meltdown Games. It is a fun way to end the season and I myself will probably be out there for at least one of the days. You can click here for more info on it.

Sugar Mountain – 56.7°- Open today on 9 of 20 trails with a loose granular surface. They will be closing for the season today at 4:30 and will have their annual Burning of the Snow.

Snowshoe Mountain – 50°- They are open on 40 of 60 trails today with a loose granular surface. Here’s what they have to say – “The countdown is really on; including today, there are just 5 DAYS remaining to ski and ride this season! But you have no excuse not to head to the mountain for those last turns, because all week we’re offering FREE SKIING! That’s right, now through closing day on Sunday, anyone lodging with us will receive lift tickets absolutely FREE! Can’t spend the night? No worries! Walk up lift tickets are just $26. That’s 50% off of our value season pricing! We’ve had a great season here at Snowshoe and we want to celebrate with you! That’s why we’re also extending Last Hurrah deals on rental equipment, in our retail stores and on select adventure activities! Plus, lodging starts at just $125 per night—so grab some friends and watch that price plummet. And don’t forget, stay for even 1 night and your lift tickets are FREE! With snow in the forecast, it’s time to make those last minute plans!

Snowshoe continues to offer the region’s MOST open terrain. We’re skiing and riding on 40 of 42 basin slopes, including 100% of the Western Territory. While there are thin and bare spots out there, it’s almost April and we’ve had somewhat of a snow drought the last half of the season, so that’s to be expected. But our grooming team continues to do a phenomenal job, especially considering some adverse weather we’ve been battling. Once again last night they were out on the majority of our open terrain, laying down a sweet corduroy surface. With warmer overnight temperatures we will have a soft, loose granular surface to start the day today. The Western Territory as well as Widowmaker and Camp 99 were all left ungroomed overnight. So we should see some nice spring bumps in those areas, especially once we warm up even more this morning.

We are possibly going to experience some thunderstorm activity throughout the day today, so if you are joining us on the mountain please be sure to pay attention to Snowshoe personnel and signage. We’ve had thunderstorms in the forecast for the last two days, and with the exception of the overnight hours on Monday, so far we’ve been able to avoid any serious storm activity. Hopefully the same remains true today, because there’s plenty of fun spring skiing to be had out there! And tomorrow Mother Nature once again plays nice, with up to 3 INCHES OF SNOW EXPECTED! That’s right; we should be ending the season with snow in the trees and some fresh white stuff on the slopes! All the more reason to get in your car and get up here and take advantage of FREE SKIING!

We can’t forget to mention that the real end of the season celebration will take place on Saturday with our annual Last Hurrah Festivities. Snowshoe will host a traditional pond skimming competition Saturday afternoon on Skidder slope, as well as a Happy Hour Survivor’s Party at Moonshine Pub. DJ Judd will be spinning tunes all day long and it should be a great day to celebrate another fantastic season at Snowshoe! Thank you to all of you who have made this year such a success. We also can’t forget to thank our phenomenal mountain operations team who has done such an amazing job all season with our snowmaking and grooming operations. We’ve had an incredible base all season, yet we had only a handful of days where snow gun activity occurred on open terrain. The grooming team has provided day after day of terrific conditions. The terrain park team stepped up in a big way this year and the parks have never looked better. And yes, Mother Nature did do her part for most of the year, dropping nearly 150" of natural snow on us, providing some epic powder days, as well as some fantastic bluebird days. And you can’t ask for more than that. So thank you to everyone who has made this a great season and we look forward to enjoying the last 5 days!”

Wisp Resort – 47°- Open on 11 of 32 trails today with a groomed surface. Lift tickets are just $21 today and they will also be having tubing tonight from 5-9pm. Wisp is still planning on being open until April 3rd, weather permitting.

Wintergreen – 50.8° – They are closed this week and plan to re-open Saturday for one final day of skiing and riding.

Timberline – 55°- Open today on 30 of 39 trails with a loose granular surface. This coming weekend they will be having the Locals Cup and other closing weekend festivities as they will be ending their season on Sunday.