Five. That’s how many ski areas remain open in the Southeast now (4 if you don’t count Wintergreen since they are closed until Saturday). Sugar Mountain ended their season yesterday, leaving App as the only remaining resort open in North Carolina. Just so you guys know, Wisp has posted this morning that they will be ending their season on Sunday. They had been saying for the past few weeks that they were going to try and make it until April 3rd, but with the mild weather recently I figured that was going to happen. We only have 4 more days left!

All of the resorts are recovering this morning after some pretty nasty weather late yesterday. Showers and thunderstorms moved across the region last night, making the task of keeping decent coverage even harder than it already has 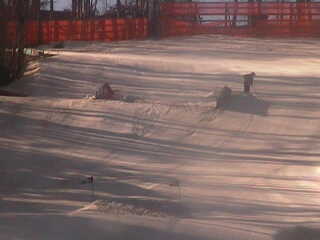 been. The interactive cam at App this morning showed the groomers out and about doing their thing to lay down some corduroy. There was also a few park employees out on the mountain fixing the terrain park features. I might have to go out there tonight.

<<<Employees at App were out on the slopes this morning making sure the park was in great shape for the day.

Up into West Virginia, Snowshoe and Timberline both picked up a minimal amount of snow. Snowshoe is reporting a trace amount and Timberline received .4”. They both could see a little bit more fall today. It’s not a lot but it’s sure better than nothing, and it will be nice to see the mountain covered in white.

The good news is that we’re going to see much cooler weather for the final weekend of skiing and riding. Temperatures are going to be 20-30 degrees colder than they have been over the past week or so which will allow for the snow to harden up and hopefully not be the slush that it has been. In fact, the next week or so looks to be much colder than recent weeks. It’s really unlucky that we’ll see a return to cooler weather right as the season ends. That’s spring weather in the Southeast for you though.

Unfortunately, some more wet weather could also accompany the colder weather this weekend. However, there’s going to be some fun end of season festivities pretty much everywhere that will make up for it. After all, it is the final weekend of skiing and riding for 8 LONG months, so don’t let it deter you.

That’s about all for today. Tomorrow I’m going to have a season snowfall recap and a look at how accurate the jelly bean fog count at the Mast General Store was, so definitely check back for that. Here’s a look across the region…

Appalachian Ski Mountain – 41°- They haven’t updated their site this morning but I’d imagine they are open on 9 of 12 trails today. The cams are showing some terrain park employees out there this morning fixing the features so that is good news. Don’t forget that this weekend they will be holding the Meltdown Games. You can click here for more info on that.

Snowshoe Mountain – 31°- They are open on 35 of 60 trails today with a frozen granular surface. Here’s what they have to say – “What a difference 24 hours makes! We’re about 20 degrees colder than this time yesterday, and instead of the threat of rain throughout the day, we’re expecting SNOW. Predicted accumulations have been lowered to about an inch, but it’s still fresh snow and it’s certainly welcomed with only 4 days left in the season! And it looks like this colder weather is going to stick around, with a sunny day expected tomorrow, followed by clouds on Saturday and possibly some additional snowfall on Sunday. It’s nice to finish up the season with a light coating on grassy areas and in the trees, and certainly the white stuff is always welcomed on the slopes.

We’re down to 35 slopes today, but that’s mainly because the Western Territory is closed for the day, and will reopen tomorrow. We had a mild day yesterday and temperatures didn’t start dropping until the early morning hours. With about 150 acres of skiable terrain to attend to, our groomers weren’t able to get over to WT. Therefore we’ve closed the area for daytime grooming and should be offering some sweet late season conditions over there tomorrow! Everything else was groomed overnight, and we still have plenty of great terrain available. High-traffic areas like Ballhooter, Hootenanny and Flume and Camp 99 are all still in great shape. Given the time of the season and some adverse weather we’ve had to combat, there are some thin and bare spots out there, but they shouldn’t interfere with a great day on the hill! It really is hard to believe that there are only 4 days left in what has been a great season!

And don’t forget, we’re letting anyone enjoy these last four days ABSOLUTELY FREE! That’s right, just book lodging with us between today and Sunday and you SKI FREE. If you can’t stay the night, no worries, daily lift tickets are just $26! That’s 50% off of our regular value season pricing! Additional discounts this week will be offered at rental and retail locations, as well as on our exciting adventure activities. Lodging starts at just $125 a night, or $32 per person, per night for you and 3 friends. And your lift tickets would be FREE! That’s an incredible deal that will allow you to enjoy the region’s most open terrain, as well as enjoy our Last Hurrah Festivities.

Snowshoe will host a traditional pond skimming competition Saturday afternoon on Skidder slope, as well as a Happy Hour Survivor’s Party at Moonshine Pub. DJ Judd will be spinning tunes all day long and it should be a great day to celebrate another fantastic season at Snowshoe! Thank you to all of you who have made this year such a success. We also can’t forget to thank our phenomenal mountain operations team who has done such an amazing job all season with our snowmaking and grooming operations. We’ve had an incredible base all season, yet we had only a handful of days where snow gun activity occurred on open terrain. The grooming team has provided day after day of terrific conditions. The terrain park team stepped up in a big way this year and the parks have never looked better. And yes, Mother Nature did do her part for most of the year, dropping nearly 150" of natural snow on us, providing some epic powder days, as well as some fantastic bluebird days. And you can’t ask for more than that. So thank you to everyone who has made this a great season and we look forward to enjoying the last 4 days!”

Wisp Resort – 32°- Open on 18 of 32 trails today with a groomed surface. They do still have a terrain park open and a tubing session will be held tonight from 5-9. As I mentioned already, Wisp has decided to close up shop for the season on Sunday.

Wintergreen – 36.7° – They are closed this week and plan to re-open Saturday for one final day of skiing and riding.

Timberline – 31°- Open today on 28 of 39 trails with a frozen granular surface. This coming weekend they will be having the Locals Cup and other closing weekend festivities as they will be ending their season on Sunday.