The Thaw Continues But Wintry Weather Arrives as Early as Tonight For Some Ski Areas! 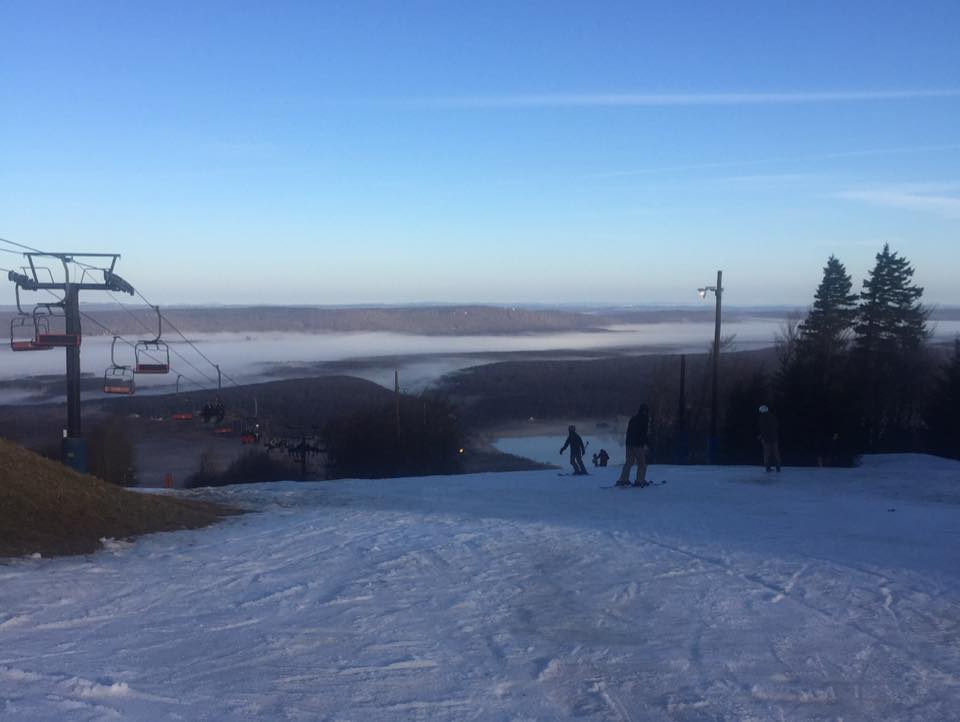 Well, it’s a new week but more of the same.  Heavy rain is moving through the region today and it has caused some temporary ski area closures, a drop in open trails, and just overall crummy conditions.  There is light at the end of the tunnel though as there is actually some snow in the forecast tonight for West Virginia and colder weather returns for everyone later this week.  We’re almost through with this epic thaw.

I suppose the weekend was decent, all things considered.  The people who handle social media for the ski areas must have not been too excited with the weather as hardly any posted pictures to Twitter, Facebook, or Instagram.  There was this beautiful shot from Appalachian Ski Mountain yesterday morning though. 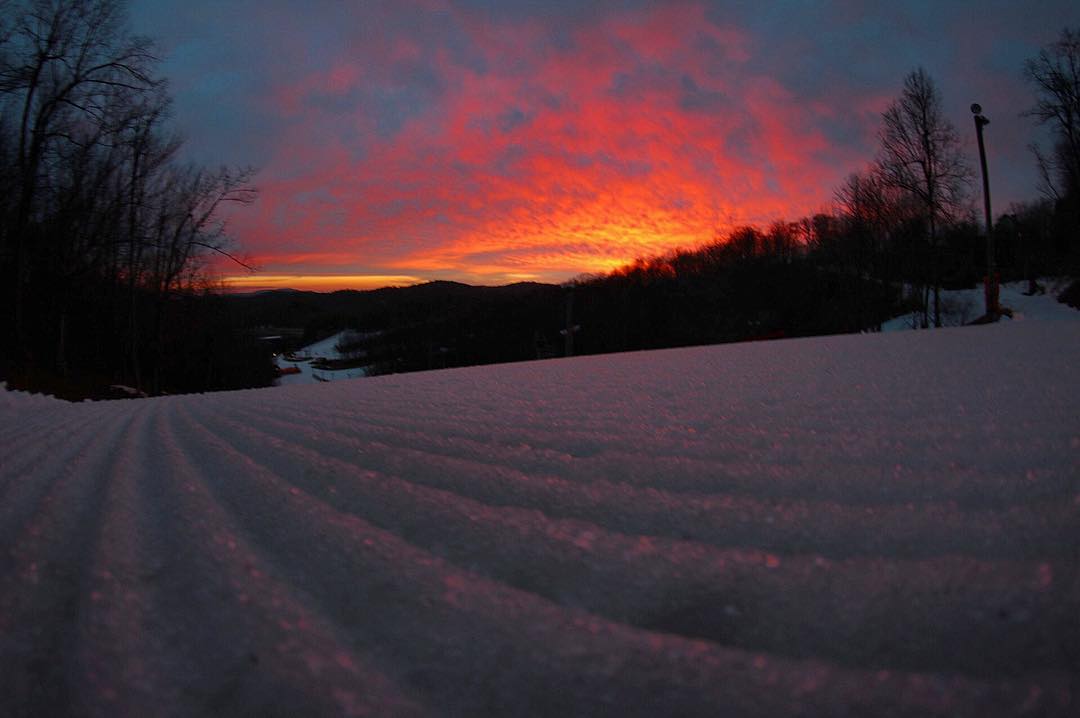 I was pleasantly surprised to see that most of the resorts were able to stay open for business.  The snow held up much better than I was anticipating last week and not nearly as many resorts had to close as I was thinking.  The southern portion of the region was hit the hardest as Cataloochee, Sapphire Valley, Wolf Ridge, and Ober Gatlinburg have all had to temporarily close and are hoping to re-open later this week.

The weather has brought about another casualty as Massanutten has decided to suspend snow operations for today and hope to re-open tomorrow.  That is a very good call based on what the radar looks like right now. 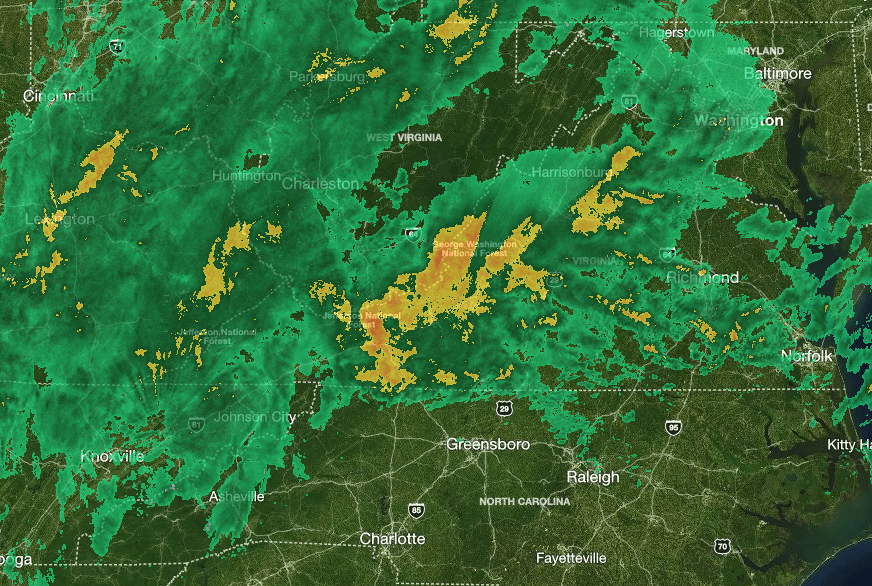 The Omni Homestead is closed today as well but that is because they are on a new operating schedule for the month of January.  They’re only open Thursday to Sunday for the time being.

Everyone else is open but some resorts have taken a hit and dropped some trails.  Beech Mountain was looking rough yesterday at the top of the mountain and as a result only the lower part is open today.  Looks like some deer were out and about this morning on the slopes. 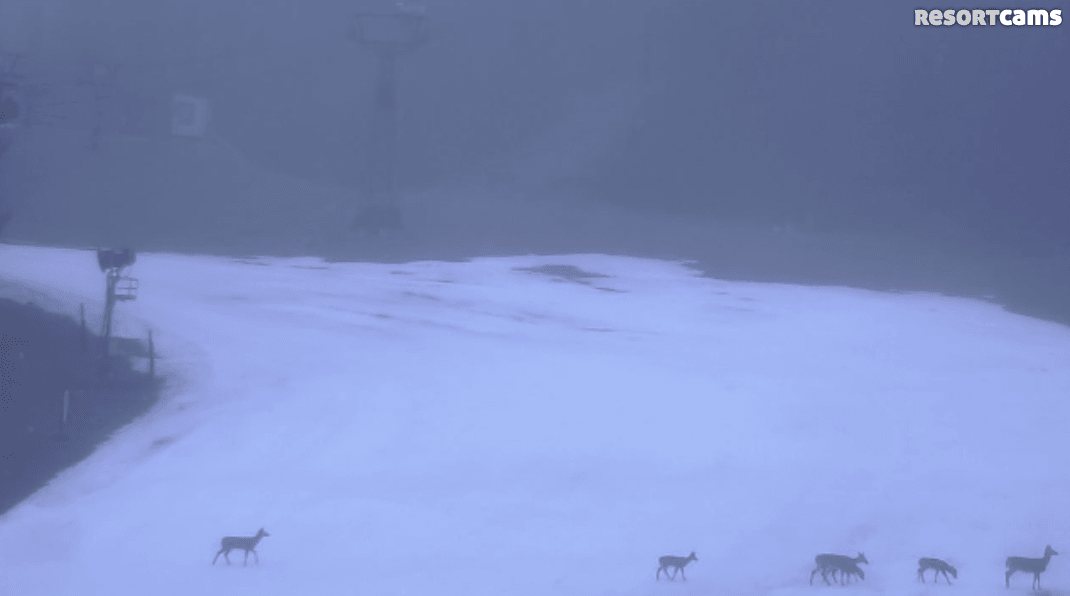 Sugar Mountain is somehow open today.  The base cam looks pretty bad out there this morning, although it looks like they did spread some snow out in the last 30 minutes or so to patch things up a bit.  If you are heading out there today I would highly suggest looking at the slopes before purchasing a ticket.

Further north, Wintergreen dropped 8 trails since yesterday and are down to 9 now.  Winterplace in West Virginia dropped 10 trails this morning and now sit at 10 open runs.  And Wisp Resort in Maryland is down 7 trails compared to yesterday and now have 18 open runs.  Some other resorts lost a run or two, but these were the biggest losses in terms of open terrain.  We will probably see more losses tomorrow due to the heavy rain today.  It’s coming down quite hard and will continue to do so for a while.

EDIT 11am: Canaan has closed almost all of their trails today for maintenance.  Only 3 are open today with half priced lift tickets.

Snow for Some Tonight! 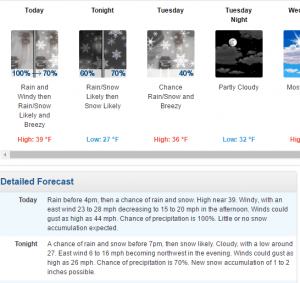 The forecast for Snowshoe. Snow!

There is some exciting news to talk about as there is snow in the forecast for the ski areas up in West Virginia and Maryland tonight.  A dusting to 2 inches is possible tonight for Snowshoe, Canaan, Timberline, and Wisp.  Snow means it will also be cold enough for snowmaking so hopefully we see the guns fire up overnight for those resorts.

The local forecaster for the North Carolina High Country mentioned a bit of snow for elevations above 5000 feet later today and tonight, so the tops of Beech and Sugar could be covered in a layer of white tomorrow morning.  Temperatures will be borderline though so we’ll have to see how that pans out.  It would be a sight for sore eyes though.

The Thaw Ends in Just a Few Short Days

As we’ve been talking about for a week now, the thaw ends later this week as colder temperatures FINALLY return.  It sure has been a long couple of weeks.  I believe it’s been just about two weeks now since we’ve seen any real snowmaking, which is astounding to say in the middle of January.  I’ve been snowboarding for a decade now and I can’t remember a January thaw lasting this long.  Some years it’s only a few days.  Others it can be a week.  But two weeks?  Sheesh.

Those colder temperatures arrive on Thursday.  Looking at the forecast, the low temperatures between now and then will be at or right above freezing for many of the ski areas.  It wouldn’t surprise me to see some of the resorts try and make some snow before then.  If they can’t, Thursday night will certainly provide the opportunity to do so as temperatures will drop into the 20’s for everyone.

The weekend is shaping up to be VERY NICE , especially compared to the past two.  Colder temperatures remain and we will most likely see around the clock snowmaking for many resorts (which will inevitably lead to people complaining about snowmaking).  There is also snow in the forecast for West Virginia and some of the North Carolina resorts.  It’s mainly light snow for NC but there would very well be a powder day or two for Snowshoe, Canaan, and Timberline if you believe some of the weather models.

So, the overall theme of the week is a return to winter by the end.  IT’S ABOUT TIME.  I’m already looking ahead to the weekend and it will be nice to talk about cold and snow once again here on the morning reports.  Stay tuned as we’ll keep you updated all week!

Previous Post
SMILES AND THANK YOUS CAN GO A LONG WAY
Next Post
Winter is Still Here at Wisp Resort!