We Are Thankful to be Skiing and Snowboarding on Thanksgiving Day. (See where…) 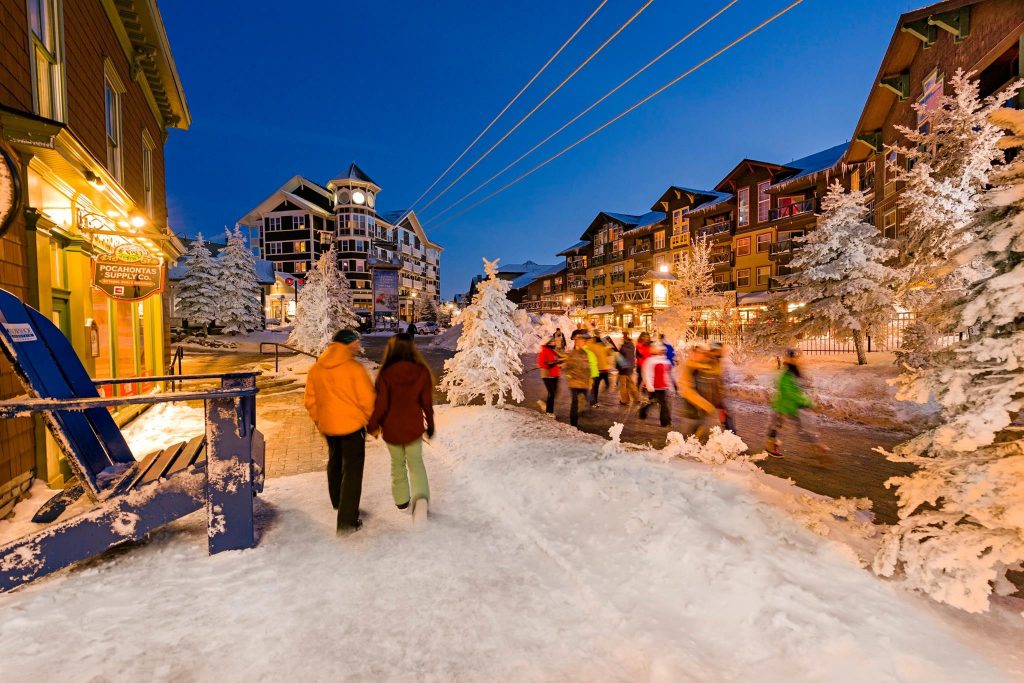 Happy Thanksgiving Everyone in SkiSoutheast-land. We’re thankful for many things today…among them to be skiing and snowboarding today and this weekend. 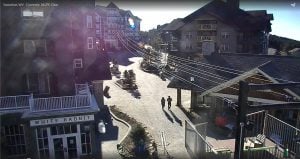 Here’s a shot this morning. If you look at the LIVE CAM you can see some snow in the Village though! Click to Enlarge!

(A word about the “cover photo” for this story. The gorgeous and snowy photo was posted by Snowshoe to announce that the slopes may not open until tomorrow, but the rest of the resort is already up and running! Dining, shopping, and lots of Holiday fun are on tap. Unfortunately, while there is snow dotting the village area, it doesn’t quite look like that this morning…but it was too pretty to pass up using!)

If you’re reading this post, I invite you to grab a cup of coffee or your favorite morning drink and let’s have a virtual talk about what’s happening across the mountaintops of the Southeast and mid-Atlantic. I’ll start the conversation going – feel free to chime in anytime 😉

A few ski areas were slated to open today and unfortunately the weather had different ideas. Appalachian Ski Mountain was one of those.

Check the SLOPE REPORT for a quick glance view of who made snow and which resorts are open today…or scroll below and get the long version!

Let’s cover the ski areas that ARE OPEN first. 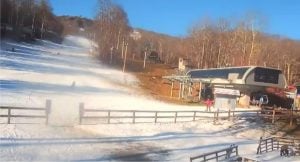 Sugar Mountain Resort – 28° – (That was the overnight low) and it is 36° now. Sugar has a base of 8-24″ with 5 slopes open for day and night sessions. They posted, “Happy Thanksgiving! Come ski or ride with us from 9 am to 4:30 pm and 6 pm to 10 pm. Snowmaking will be in progress as temperatures allow. Ice skating is open for all sessions!”

I can tell you that earlier in the week Sugar looked pretty awesome. Snowmaking ops have been slim over the last couple of days and Sugar is already looking a little “worn” but we can be thankful that they are open, right?

Cataloochee Ski Area – 41° – They are open for day sessions only today with 3 slopes open and a base of 12-14″. They are reporting that they made snow over the last 24 hours and we’re thinking that might be as of early Wednesday AM, because we think it was a bit too warm to make snow their last night or this morning.

Snowshoe Mountain – 24° and making snow. In fact they’ve made some impressive whales across the top and bottom of their mountain – both on the Snowshoe and Silvercreek sides of the mountain. Truth is, they have more snow across their mountain than all the rest of the resorts put together. They are looking at opening this weekend. Maybe Friday…maybe Saturday. Stay tuned. 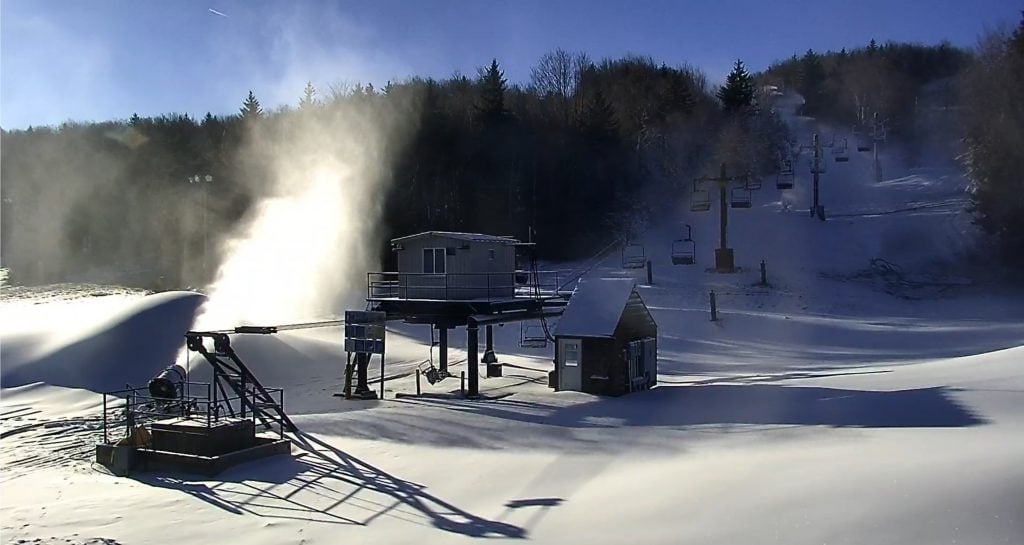 The slopes may not open until tomorrow, but the rest of the resort is already up and running! Dining, shopping, and lots of Holiday fun are on tap. Our Adventure Crew has the good times rolling with Offroad RZR Tours, Sporting Clays, and more! Fuel up for your adventure by joining us for our Thanksgiving feast, today from Noon to 8PM in the Junction. 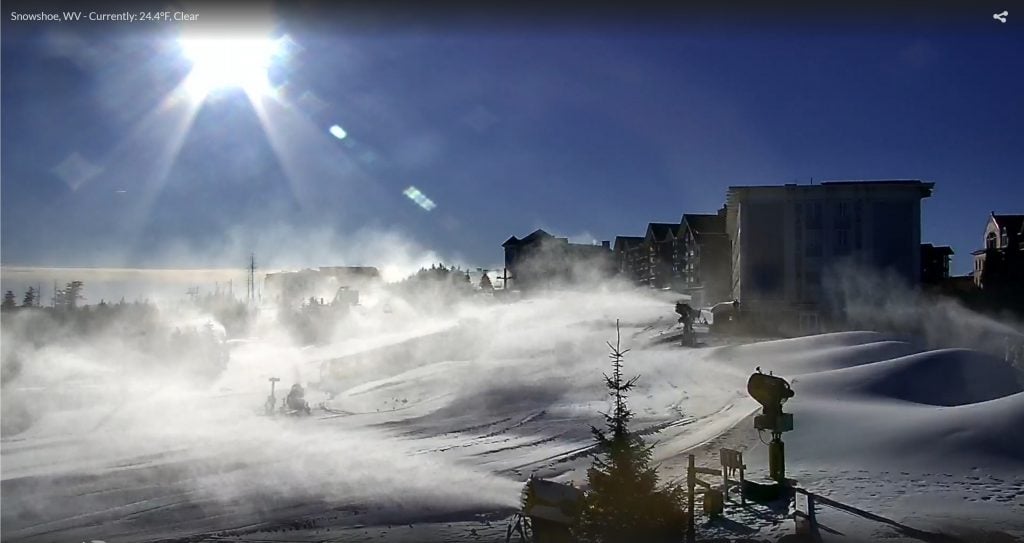 Click to Enlarge! Nice shot at the top of the mountain!

Check out This Week on the Mountain for the full schedule of operating hours, holiday activities and more > https://www.snowshoemtn.com/things-to-do/this-week-on-the-mountain 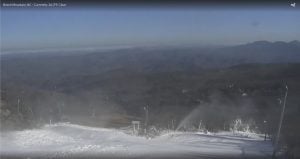 Beech Mountain Resort is making snow on their core trails. Click to Enlarge!

Beech Mountain Resort – 33° and making snow on their core trails to get open for tomorrow (Friday, November 24th). Those trails would be Upper and Lower Shawneehaw, and probably the crossover to Freestyle and the Play Yard for their first day of the season.

Canaan Valley Resort – 22° – They are blasting the slopes this morning and now at every opportunity to do so in anticipation of their December 15th opening. Ice skating IS open today.

Winterplace Resort – 30° – It doesn’t appear that they made snow overnight, but they have been preparing for their opening day – planned for December 9th.

Appalachian Ski Mountain – 34° – Unfortunately no snowmaking weather materialized as hoped overnight, and Appalachian Ski Mtn. is unable to open for skiing & snowboarding this Thanksgiving Weekend. The forecasted low for ASM was in the low 20’s, but calm winds and clear skies led to a significant inversion in temperatures, and the actual low for the top of the mountain overnight was 34.7 degrees.

“We will be watching the weather in the days to come and plan to make snow and open for the season as soon as temperatures allow,” reports Drew Stanley.

The Appalachian Ice Arena will be open this Holiday Weekend, beginning Friday, November 24. Join us for a memorable Thanksgiving weekend on the Ice at ASM!

Wisp Resort – 22.7° – They are making snow and not quite ready to pull the trigger and open for the season. Wisp posted the following update late on Wednesday in an obvious statement to those who are clamoring for Wisp to follow the lead set by other area ski resorts. 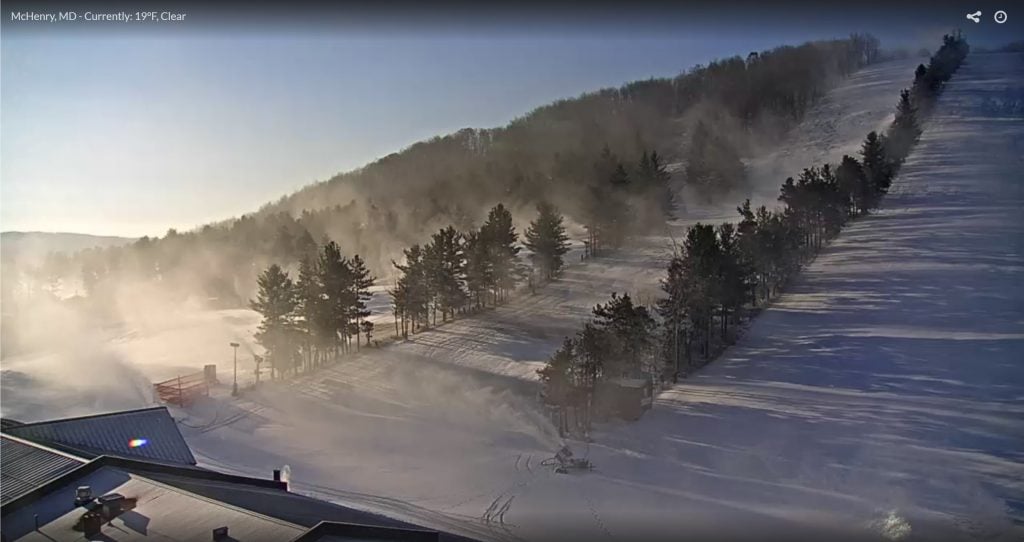 A delightful site for all Wisp Resort fans with tons of snowmaking happening! Click to Enlarge.

Wisp is hearing from a lot of people on social media with strong cases of “the winter joneses”! They’ll be opening before you know it.

Wolf Ridge Resort – 40°. They were hoping to be able to make snow last night, but that didn’t pan out. They posted, “The Wolf Will be making snow tonight and if weather permits, throughout the Thanksgiving weekend and into next week. We are excited about this ski season and are planning to be open by December 1st or 2nd. Hope to see you then!!!”

Sapphire Valley – 27° – I was crazy surprised to see that it was 27° this morning and Sapphire made snow. It’s still too early for them to open. More likely mid December other than their Frozen Falls Tubing area. (No it isn’t open yet either.)

Bryce Resort – made snow recently, but are now waiting on cold air….
Omni Homestead – They have not made snow just yet.

Massanutten Resort – it was cold enough to make snow this morning, however Steve and their crew are also waiting on more consistent cold temps to begin in earnest. They posted, “Massanutten’s Snow Makers conducted a system test last weekend and made some snow in a few locations. The snow makers and snow guns are ready to go whenever the temperatures allow. We are seeing a few overnight temps in the next week that we plan to take advantage of. Keep checking back for updates, Winter is coming at Massanutten!”

Timberline Resort – 19° – Many readers are emailing asking about snowmaking attempts so far. Brian Hart wrote, “Any snowmaking happening yet?” The answer is “probably” but there’s been no official word and their webcam isn’t operation yet. They are still 20 days away from opening day though which is slated to be December 15th.

Previous Post
App Ski Mountain Will Not Be Open For Skiing and Snowboarding This Weekend
Next Post
We’re Up to FOUR Ski Resorts Open Today!