Sunday Will Offer MORE OPEN SLOPES and One Ski Resorts Gets to 100% Open. See Which One… 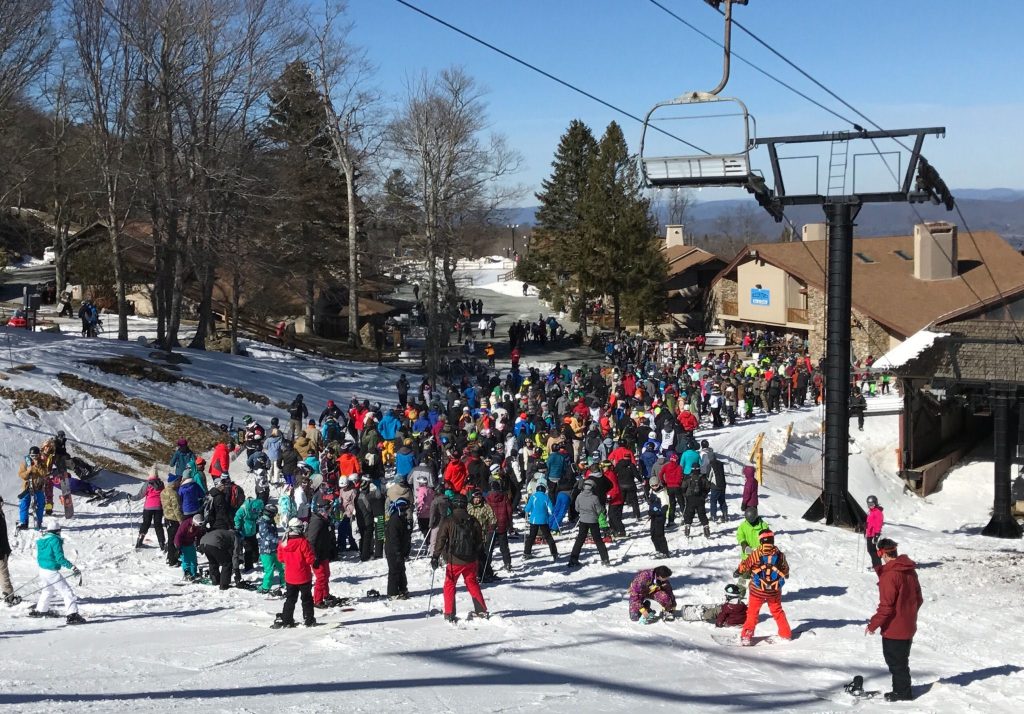 The photo above was taken by Kenny Griffin as things got VERY busy at the base of Beech Mountain on Saturday!

Check the SNOW REPORT for all of the details and slope openings.

I’m rambling this morning as there’s LOTS to share from around the region. We also had some great photos submitted over the last 24 hours or so and we’ve shared those as featured photos on the front page as well as within this Mountain Blog.

On the subject of Special Announcements – on Friday Kenny Griffin shared that we had a BIG ANNOUNCEMENT and then he hinted that I was probably delaying it so that I could be the one to release the information. The truth is that we have been working on some FINAL TWEAKS…and I will be making the official announcement a bit later this morning – but let’s go ahead and start the leak of information.

We have some amazing news and offers for the Annual SkiSoutheast/Snowshoe Summit to be held March 3rd, 4th and 5th. Stay tuned and check back later today for what we have planned for you guys.

Now to more of the usual, Sunday “stream of consciousness” that I tend to share.

On Saturday – I posted a mid-day report and shared that the webcams were showing “brisk traffic” at various ski areas. Skier visit numbers were obviously UP on Saturday as the skies were gorgeous, temps were chilly/cold and perfect and the snow conditions everywhere were awesome.

A bit later in the day Kenny Griffin sent me this photo! Earlier in the morning he had texted me some nice photos and a comment about him doing “hot laps” up and down the slopes. Then he sent this “as I was about to leave” photo showing one hell of a Quad lift line at the bottom of the mountain. Wow!

Kenny Griffin snapped this photo and posted that “They were parking people in town at the ‘big open field” off of Beech Mountain Parkway! Click to Enlarge!

That’s the way it is at all ski areas. Get up and hit the slopes when they FIRST open and you can make “hot laps” with little to NO wait on the lift. Then after about 10:30am-11am things will start getting busy.

I was just checking out Sugar’s base camera at 10am this morning and you can literally ski down and right up and onto the Summit Express, six-man chairlift. Give it another hour or two – not so much.

Tom aka SpydeeTJB from the messageboard sent us this awesome photo from Saturday morning at Snowshoe. He wrote, “Early morning on Widowmaker – Feb 4th, 2 degrees at 630am but the sun warmed the day into the 20s. Snow was great all day!” 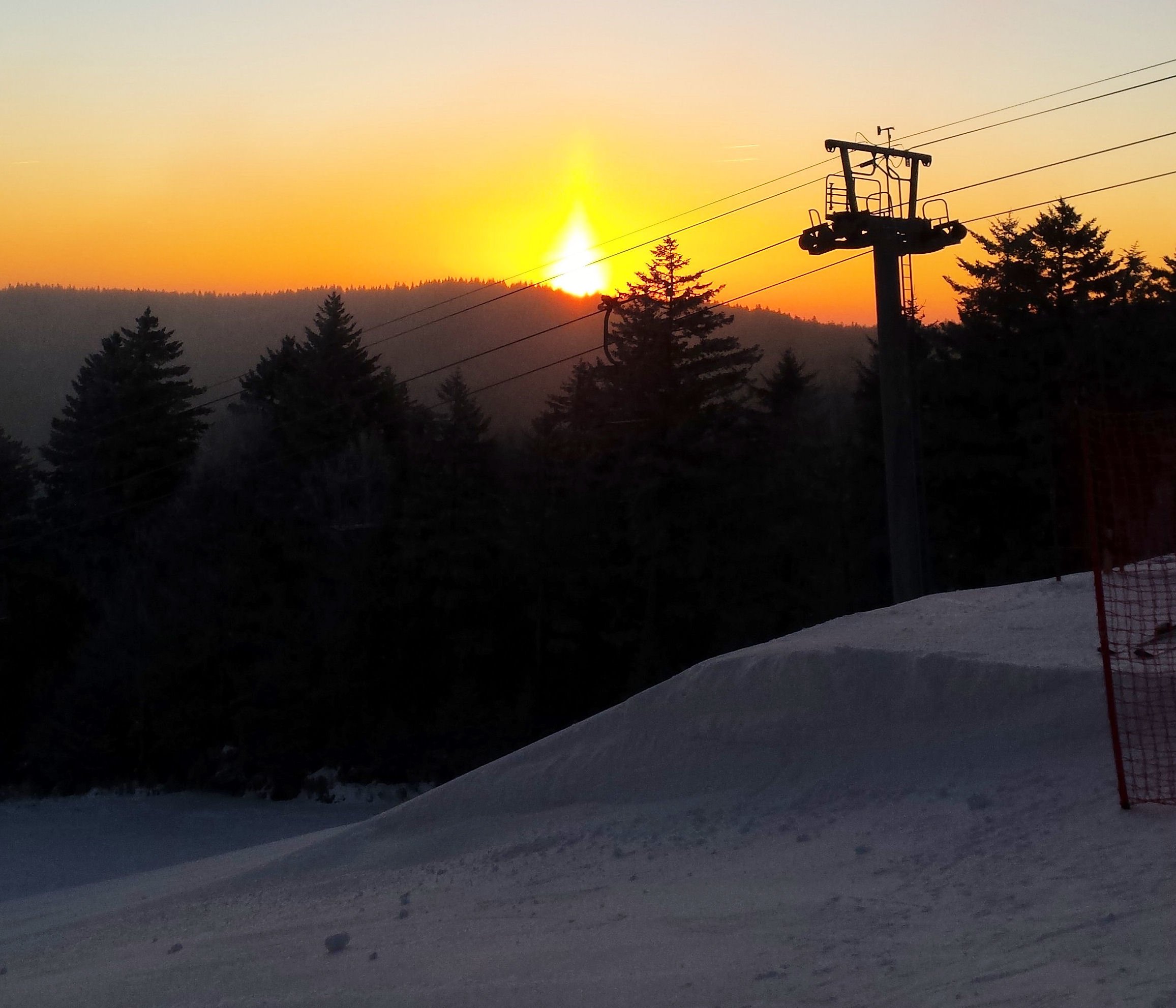 Taken Saturday Morning from Widowmaker at Snowshoe. Click to Enlarge.

There are some weather alerts posted this morning for several counties covering numerous of the ski areas in North Carolina this morning as patchy sleet and slushy precip fell overnight coating some roadways. As the sun comes out that should all clear quickly.

As I was touring around the weather stations at the various ski resorts, many were hovering at around 26° or so this morning. Cataloochee’s 34°, Wolf Ridge’s 34°, and Ober’s 40° were the only areas above freezing as of 9am.

Speaking of Cat – they jumped their base depth reported from 26-40″ on Saturday morning to 38-52″ this morning. That’s 12″ of base created with those optimal snowmaking conditions over the last 24 hours. They also added another slope open to go to 8 of 18 for Sunday. Hopefully the weather pattern is favorable over at the “gateway to the Smokies” for the next week or so to build more base and open even more terrain. 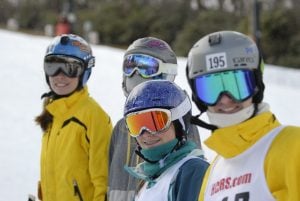 Sugar Mountain Resort is hosting the High Country Jr. Race Series today and then after that they will hold NASTAR on Oma’s Meadow. That really impressed the heck out of me as on Friday there was NO SNOW on Oma’s Meadow and that trail had not been open ONCE this season. Sugar Mountain “laid the snow” to that “old girl” over the last 24 hours and change and while the base may be measured with a standard 12″ ruler, as Joe Stevens says all the time – you only ski or ride on the top few inches anyway.

By the way if you want to watch the racers START and see some of that crowd, you can “tune in” to the Sugar Ski & Country Club cam to watch.

Speaking of Sugar Ski & Country Club – their guests have to be ecstatic to be able to ski in / ski out for the first time this season. Hopefully Sugar will now work to continue to keep that trail open the rest of the way.

Massanutten Resort added more base and increased their slope count to 9 of 14 for today.

Canaan Valley and Timberline picked up ANOTHER TRACE of snow, 1.5″ in the last 30+ hours and now 82″ on the season to lead the region. Snowshoe’s 65″ is the next highest so as you can see – the weather patterns this winter have dumped appreciably more snow in Tucker County than atop Pocahontas County.

Speaking of Timberline – they added another open trail to get to 26 of 40 slopes open.

Winterplace added TWO slopes to their open count to get to 24 of 27 trails available.

There is only ONE ski area in the region that is 100% open at that is Canaan Valley with all 47 slopes and trails open. Snowshoe’s 55 of 57 leads the way with available acreage to play on.

We recently made a comment in passing about Ober Gatlinburg cancelling the TN Special Olympic games that were schedule for the Smoky Mountain resort for this weekend and week. Ober’s John Cossaboom wrote, “Ober did not cancel the games. That decision was made by TNSO. There was more than enough snow to meet their needs.”

The press release by Ober stated, “Due to unforeseen circumstances beyond Ober Gatlinburg’s Control, the 32nd Special Olympics Tennessee Winter Games has been cancelled.  Despite a decent amount of snow on the slopes, the Winter Games are cancelled because of forecasted weather for Tuesday, February 7th.”

So it was the perceived forecast that forced the decision by the TNSO people. We tell people all the time – if you don’t like the weather at any moment – just sit tight for 30 minutes because it will change in these mountains. Forecasting several days ahead is a crap-shoot.

Lynn Swann of Omni Homestead shared a cool photo showing really nice conditions on Saturday on the snow as well as above it with the new (and popular) zip line whisking riders over the snow. 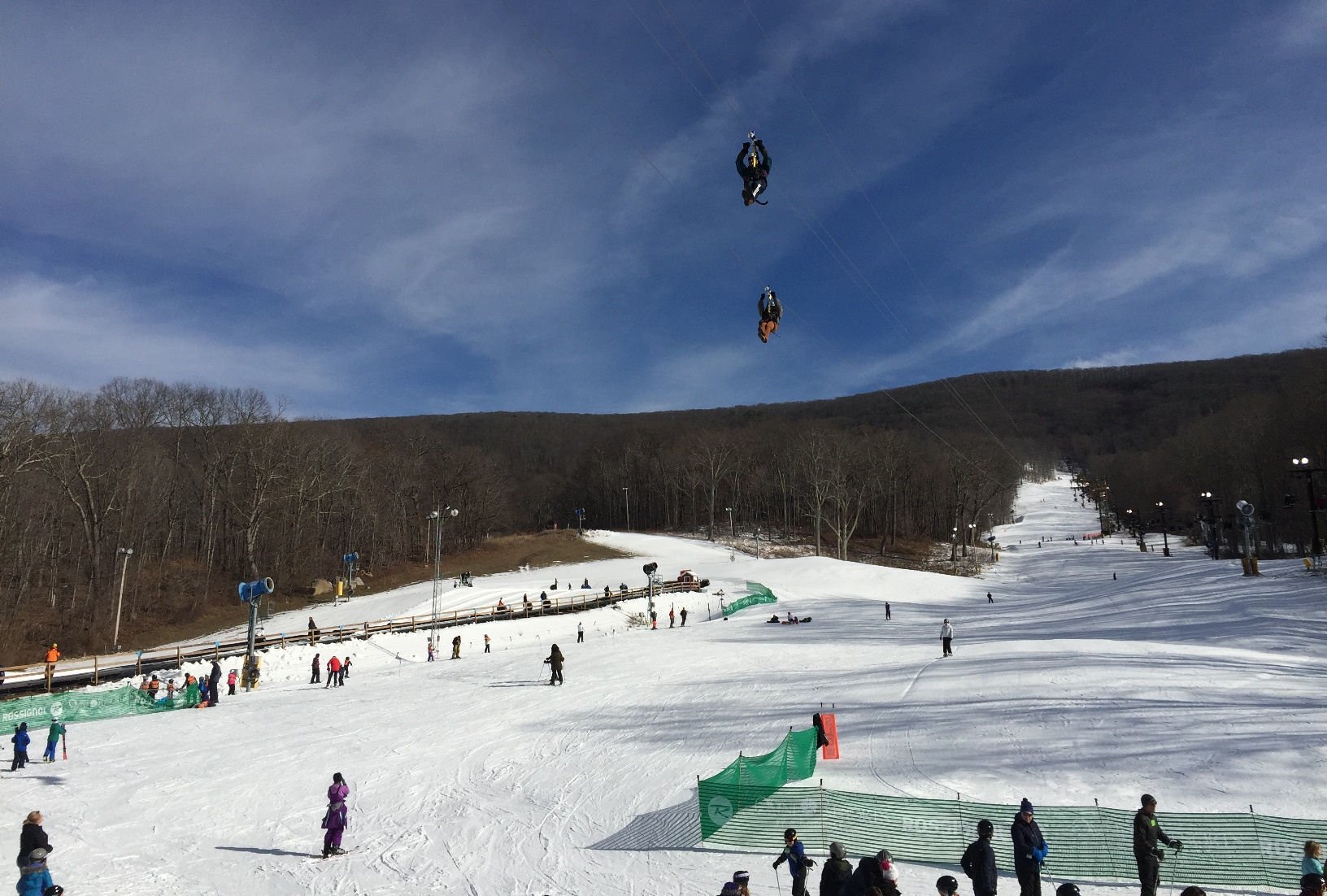 Omni Homestead shows great conditions on the snow and above them. Click to Enlarge!

Snowshoe posted, “Super Sunday has arrived here on the Mountain! Whether you’re pulling for the Patriots or the Falcons, everyone wins when the ski conditions are as good as they are today. Our snowmakers have been hammering down on Lower Shay’s at every opportunity and we’re happy to announce that it will open tomorrow!”

I was driving over the top ridge behind Appalachian Ski Mountain last night as it’s always kind of cool to show people who are visiting us some SNOWY conditions as Apps snowmaking efforts always leaves several inches of snow over that roadway…kind of creating a winter-wonderland for about 100 yards. Last night App was blasting away and they too have their snowmaking plant turned OFF for Sunday skiing and riding.

That’s it for me FOR NOW. Check back in a bit for news on the SkiSoutheast Summit and how to get HUGE discounts, WIN TWO FREE SEASONS PASSES and MORE! Enjoy your day. Email me if have something to say – [email protected]