Sunday is Another Fun Day to be On the Slopes

CHECK THE SNOW REPORT for all of the deets, but here are some notables:

Three years ago, today, it was bombing snow. Not so today…unfortunately.

Sunday will be yet another milder-than-normal day in the mountains. No snowmaking is going on elsewhere around the region – at this time. However, Wisp Resort WAS the only ski resort that WAS able to make snow as they were doing so at 7:30am this morning with a low of 28°

The Photo of the Day at the top of this post is FROM that snowmaking happening at Wisp Resort.

So, again, the only ski area that saw sub-30° this morning and able to make snow was Wisp Resort in Maryland.

As we reported on Saturday morning, the weather for today, Sunday, should be pretty nice for all of the resorts, with highs in the 40s to low 50s and mostly sunny skies. However, later in the afternoon and evening, some rain is in the forecast and we should see some cooler temperatures and perhaps some wintry mix throughout the first part of the week. There are slightly better chances for some light snow into West Virginia and Maryland.

MY SUNDAY RAMBLE…ANOTHER SEGMENT OF BEING A DIGITAL NOMAD

For those of you who are fairly new to SkiSoutheast, Monday’s through Sunday’s, Matt Laws, Kenny Griffin and Meteorologist, Brad Panovich provide you with the latest conditions and news from each of the ski areas. Rudy Ryback and Brian Dix tend to chip with reports frequently.

On the weekends, Joe Stevens offers up his Snow News is Good News column and I do my best to expand on what’s happening across every mountaintop resort of the region. I try to go into more depth and provide a lot more in the way of video and photo shares from each resort. Sunday’s are my day to kind of provide a disorganized ramble of content that just kind of comes to mind – in whatever order it pops in my head.

A few months ago I received an email from a young lady who called me her favorite “digital nomad”. I knew what a nomad is/was. I make my living (my real job) in the digital industry, so I’m good there. However, I had not heard the term “digital nomad”. I had to look it up. Merriam-Webster defines the phrase:

“A person who earns a living working online in various locations of their choosing (rather than a fixed business location). “The ability to travel while still earning a living is my favorite thing about being a digital nomad.”

While I and most of my staff can (and do) work remotely a lot of the time, our duties here at SkiSoutheast.com actually require us to each work kind of reverse of the truest sense of the phrase. Instead of moving around, visiting our favorite locations and being able to earn a living – we tend to visit our favorite locations DIGITALLY and share the news that we can…in kind of a one stop shop.

While I DO move around from time to time, visiting our various ski areas, most of my “travels” take place digitally. Hence the affinity for the phrase. I might even incorporate it more often as a place to share a lot of our reader’s comments and input.

Dang I Missed This Yesterday!

Gil Adams has been a member of the National Ski Patrol since 1970 and has skied at Beech Mountain since its opening in 1967. Adams served as the Patrol Director from 1982 to 2017. To honor him, they have named the patrol base building the “Gil Adams Patrol Base”.

Costin added, “Gil worked tirelessly as an advocate for the North Carolina Ski Industry while serving as a loyal employee of Beech Mountain Resort,” said General Manager Ryan Costin. “His service helped shape the future of Beech Mountain, and we hope to honor that through this dedication.”

What a GREAT honor for a GREAT guy. Very much deserved.

A few readers have recently been emailing, sharing temperature readings at lower elevations and wondering why the ski areas haven’t been making snow. Several times over the last week or so, we have seen temperatures of 25° in the valleys below the ski area mountain tops, thus prompting the question, “Why isn’t XYZ Resort making snow?”

Often the answer to that question is – TEMPERATURE INVERSIONS

It is a common weather occurrence that we may get Meteorologist, Brad Panovich to expound upon. They happen all winter long, but tend to be more frequent in early winter.

A simple definition is that cold air is heavier than warm air. Cold air can flow into the valleys like liquid, pushing warm air upwards to higher elevations (our ski slopes).

We’ve seen a lot of inversions so far in November and early December.

A couple of readers wrote to me recently wanting to see some natural snow. Yesterday, one wrote, asking:

O—k—a—y. That felt very robotic. The best answer right now might be to head to HAWAII where they’ve had blizzard warnings and more than a foot of snow. However, I presume the question was aimed at – where can I go in the Southeast or mid-Atlantic? – and I suppose my best answer FOR THIS WEEK would be to trek on up to West Virginia’s Snowshoe, Canaan or Timberline mountains. While I don’t think any of those ski areas will be dumped on, we are keeping an eye on some cold and snowy weather headed their way for the middle of the week.

It Certainly Was NOT a SNOW-VEMBER…

With each passing day without cold and snow, I get more and more skiMail complaining about that fact and attributing it to “Climate Change”. I won’t be baited into a rant, but I will share this little tidbit as an answer. Do you guys realize that THIS PAST NOVEMBER was snowier than the last two Novembers? According to David Lesher’s Canaan Valley Weather, they saw 11.1″ of snowfall last month, compared to 6.7″ in November of 2020 and 8.7″ in November of 2019.

A lack of natural snow – so far – has been more obvious within THE REST of the region where we’ve only seen:

0.5″ to 1″ at the North Carolina ski mountains
Only a TRACE of snow at any of the Virginia and Tennessee ski mountains

Only West Virginia has seen measurable snowfall thus far with:

Wisp Resort in Maryland is reporting 6.2″ so far.

Be patient, SNOW will come.

As we reported on Saturday, we have eight of sixteen ski resorts open and the conditions at those resorts are pretty remarkable considering how little cold weather we’ve had. Of the other ski areas, several had previously shared that “weather permitting” THEY would be opening from December 11th-18th. One glance at the weather forecasts at various locations across the region will tell you that those opening dates my be delayed a bit.

Appalachian Ski Mountain is offering $12 lift tix to ski or ride from 6pm-11pm on Sundays. 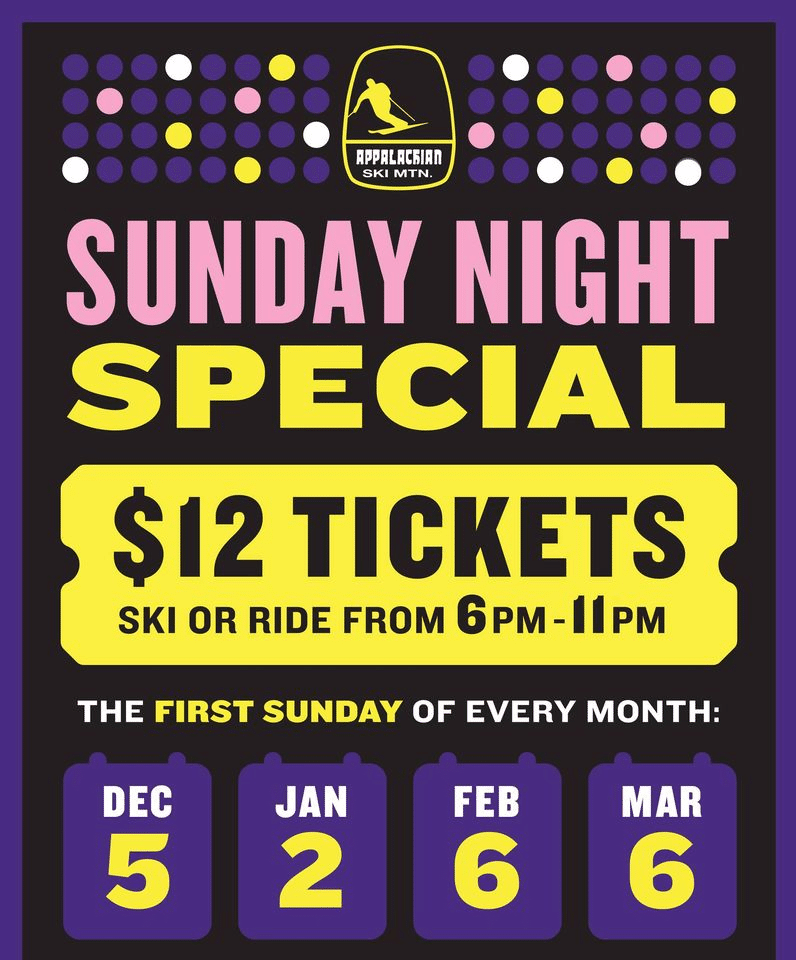 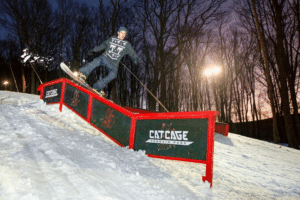 New for the 2021-2022 Season!!!
– Adult Freestyle Camp –
The adult freestyle camp program is a seven-week program designed for intermediate and advanced level skiers and riders who want to focus on terrain park specific skills and learning new tricks. This program is intended to give adults the chance to be introduced to the freestyle environment by a professional, build on existing park skills, and meet others in our community that love skiing and snowboarding as much as you! Sign up starts December 6th.
Must be 18 years or older! 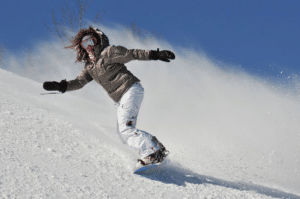 I loved this question posed by Winterplace Resort’s marketing staff:

“What was the first year you visited Winterplace? Let’s do some reminiscing while gearing up for opening day!”

Some of the best answers were:

Erin Downard Treacy
The first year it opened. Father, daughter day out. I basically grew up on that mountain in the years that followed.

Jamie French
1985 when I was in high school. I got skis for Christmas!

Robin Hugley Greer
Last year!! We had never been skiing so came without kids. We enjoyed it so much we are coming back with the kids and 5 more families!

Sierra Mayo
I’ve never been sadly but am really trying to make it this year!

Sierra has messaged us a couple of times inquiring about driving, etc.

MY first time was 35 years ago at Appalachian Ski Mountain. My second time was the next day at Beech Mountain. A short time later, I moved from Columbia, South Carolina to Seven Devils, NC (home to Hawksnest) and skied three to four times a week.

My NEXT time skiing will be TODAY as I am re-introducing another newbie to the sport. Can’t even offer a guess as to how many people I have hit the slopes with as their first time. Today I will be taking my youngest daughter’s boyfriend to Beech for his first trip up there.