It is Sunday and there appears to be an inversion occurring this morning as temps are slightly chillier at the lower elevations than up top. We’re seeing 25° readings around Elk River in Western North Carolina and 41° atop Beech Mountain’s 5506′ elevations. We really haven’t had many temperature inversions this season at all. I know that over the last couple of years those pesky things seemed to come along much more often. 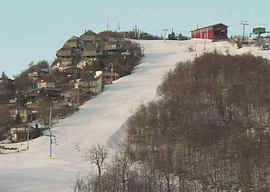 Anyway – no snowmaking occurred in the Western NC Mountains. All of the North Carolina ski resorts are 100% open with great coverage for today with the lone exception of Wolf Ridge Resort which is open with 18 of 23 trails. That’s about what they’ve been running most of the season though – so Wolf is in good shape as far as snow coverage. They have side-to-side coverage although those sides are beginning to "creep in" a bit. 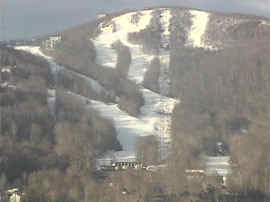 I actually enjoyed App’s post this morning. They wrote, "Don’t head for the golf course just yet; we have tons of awesome snow (100% coverage) come out and ski!"

Wolf Ridge Resort is having some fun today as well! They had an ingenious post this morning. They wrote, " Sunday PHOTO CONTEST at The Wolf on President’s Day Weekend! Photo of the Brightest, Most Creative Ski/Snowboard Outfit with the Greatest Visual Expressions. The Winner will get a HOUSE, a BOAT, a CAR and a Free One Way Trip to Historic Marshall, NC! Just kidding: How about a FREE MEAL and YOUR PICTURE ON THE WEBSITE!"

That was pretty cool! Hopefully they’ll get some nice photos and send them our way!

Conditions look pretty darn nice out despite the mild temps. Sapphire and Wolf reported NO BASE DROP although as mentioned we are seeing some sides creep in there. The rest of the NC Ski Areas reported drops that ranged in the 2-6" base depth decrease. Most of the NC resorts are showing from 35-70" or so of base. There’s plenty – PLENTY of snow on the slopes. 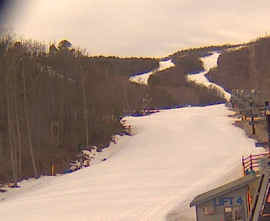 Out of all of the states in our region this winter – the Virginia resorts have had to fight the fight more than the rest this season. They’ve certainly had a lot less to work with in terms of consistently cold, snowmaking temps and natural snow. Nevertheless, they are maintaining quite well. Massanutten Resort is showing pretty darn nice this morning via their new live cam.

It is colder in Virginia this AM than the higher elevation resorts in North Carolina. We’re seeing 27-28° at Bryce and Massanutten this AM although neither made snow. Wintergreen Resort also showed a low temp of 28° and THEY DID MAKE SNOW OVERNIGHT! They added some fresh, manmade snow which should make for some sweet conditions today on 25 of 26 trails.

It seems that today – the further north you go, the colder it is. That’s the way it is supposed to be but that hasn’t always been the case this season. The West Virginia ski resorts are some 20° colder than the NC ski areas this morning. Canaan Valley is reporting 19° this AM although no report of snowmaking. A couple of reporting services are reflecting natural snowfall for Canaan and Timberline although it hasn’t snowed there since February 15th. Canaan Valley IS looking sweet though with 37 of 39 trails open for playing on today.

While we’re on Canaan – they have a darn nice deal going from March 1st through the 10th. You can Stay and Ski Free anytime midweek at Canaan Valley Resort. Just $49 per person / per night!

Snowshoe Mountain is once again the cold spot in the region with a low of 22° this morning although we’re not seeing any report of snowmaking even occurring overnight. They are playing on 59 of 60 trails today and Laura’s talking a lot of grooming talk on her blog this morning. Snowshoe grooms perhaps the best in the region so conditions should be sweet this morning.

I got a few emails yesterday talking about how windy it was at various resorts. Evidently it was way-windy at The Shoe on Saturday as Laura wrote, "If you didn’t get blown away yesterday, you’re in luck, because the weather is going to be much more cooperative today. We’ll start off the morning sunny and clear, but clouds will move in throughout the day. But that wind that was so disruptive yesterday will be calm to nonexistent, allowing you to enjoy our great on-snow conditions."

She added, "Once again last night everything was groomed. With colder overnight temperature we were also able to get our winch cat out once again. This amazing machine allows us to push snow up slope. With the recent mild weather, snow doesn’t melt as much as it softens up and slides, or is pushed by skier traffic, to the base of the slopes. The winch cat allows us to return all of that snow to the areas that need it most, and groom it back into the slope. This is especially useful on steep areas, and that’s where we concentrated last night; Widowmaker, Upper Ballhooter and Lower Shay’s. Those areas should be in amazing condition this morning and you may want to head there first!"

Wisp Resort is showing a low of 26° this morning but no snowmaking either. They’ll have 29 of 32 trails open today. 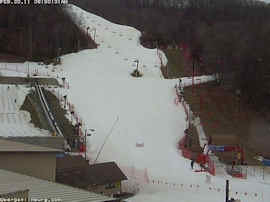 The "warm spot" in the region this morning is definately at Ober Gatlinburg with a low of 54°. They are maintaining quite well however with all 9 trails open and good, groomed conditions.

After the tour around the region it appears that only Wintergreen Resort made snow overnight despite the temperature being cold enough at several locations that they could have. That is an indicator of just how much snow is still out there. Hopefully after two straight days of showing you guys some current photos you’ll "get the picture" of just how good things look at your favorite ski hill.

If you have President’s Day Monday off, why not come to the mountains?!?!

I’ve been chillin’ off the mountain this weekend, but I’ll be heading back up today. If anyone has seen "Old Man Winter" will you tell him that we’re ready for another visit? Looking at the long range forecast, we’re seeing some chilly outbreaks mid week, but nothing that looks really promising for some more snow through the next week. There’s a dusting or two of snow coming in perhaps Tuesday, but we’re also seeing some hints at some "under-developed" snow (rain) so get up here today and Monday. We’ll see how things go over the next week and whether or not we get that "last burst of cold outbreak" that the weather gurus were talking about that should come in around the first of March.