President’s Day Weekend Looks Like it Should be Another Great Holiday Weekend!

Hi guys! Kenny’s been doing a great job hasn’t he?

Talking about a smooth transition after taking over the weekday reporting and writing! He was so smooth that I dropped by his office yesterday and called him "Kenny G". I guess "theKENDOG" is cooler though. However if some of you see him on the slopes this weekend or at the Snowshoe Summit in a couple of weeks, call him Kenny G. He’ll be playing up at Beech today and/or Sunday from what I think I heard on Friday.

Kenny’s doing a fine job of coming up to speed on working with the webcams as he got both of the Watauga Lake live cams back up and running on Thursday. With this weather that we’ve enjoyed over the last week a lot of you were emailing us asking for those cams to pop back up. They are now and you can check them out at:

This is a ski website though and I know there have been tons of you emailing asking if all the snow is gone. Good grief! I go away for a fews days here and there and evidently some of you think the snow went with me! We continue to inform you guys that there’s lots and lots of snow on the slopes and somehow if we go a day without saying it… 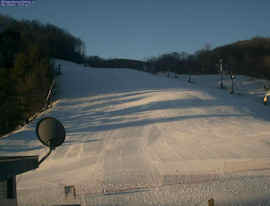 It should also be noted that there’s not only good snow depth ON THE SLOPES, there’s still quite a bit of snow off the slopes and laying around at many of the higher elevation, ski resort communities particularly atop Beech, Sugar, Snowshoe, Canaan Valley, Timberline and Wisp Resorts.

For example, Canaan and Timberline are still reporting 6-8" of snow in the back country for cross country skiing! Ditto at Wisp Resort and I know the same can be said at Snowshoe as well. There’s not consistent enough snow for cross country skiing up on top of Beech and Sugar, but there IS quite a lot of snow laying around here and there if you want to go have a snowball fight here and there! 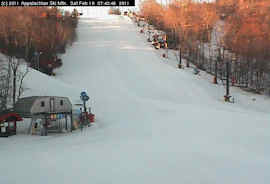 If there’s natural snow still laying around, then you guys HAVE to know that the snow on the slopes is in great shape as far as base depths are concerned. I am disappointed to have received some sporadic reports of less than nice surface conditions at a resort or two this past week – during the week. Several people emailed me on Thursday about one specific resort that was – in their words – "HORRIBLE" on Thursday evening. Seems this specific resort did ZERO grooming and conditions were, "rock hard, refrigerator ice" from top to bottom. Three different trip reports complained that they only made one or two trips down and quit. That’s a shame. That’s the first time we’ve heard THAT kind of a bad report all season long on this particular resort so I’m not going to "out them" this morning, however just because the season is beginning to wind down, and just because it was a weekday – is NO TIME to be lazy with snow maintenance.

There will be a premium on grooming during this first, prolonged mild stretch that we’re experiencing right now. Resorts have not really HAD to stay on top of the conditions as much over the last two seasons with all the cold and snow we’ve seen. However it is when "ma nature" doesn’t support the ski areas – when you see what a resort is made of in terms of keeping all that snow in beautiful condition. It takes some "massaging" here and there to keep it nice.

We’ve heard some great things from over at App, Cataloochee, Sugar, Snowshoe, Winterplace, Wintergreen, Massanutten and Wisp regarding how amazing those teams do with keeping some sweet corduroy on the slopes. Those traditionally get a lot of compliments. Most of the others have over the last couple of seasons as well…and hopefully what we heard this last Thursday was an anomaly. If we hear more we’ll inform you guys…’cause we only want to send you where it’s great! 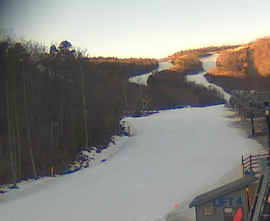 Conditions SHOULD be great today as temperatures nosed down into the 20s and 30s across much of the region. That firms things up great. Once the groomers play on it prior to you guys getting on the snow – things should be awesome. We were a little surprised that a few resorts didn’t make snow overnight. While most of the ski areas could not have due to temperatures slightly above the freezing mark – some could have. Perhaps it was the high winds that we saw reported at several locations. We’re hearing that it is meant to be a bit on the breezy side today. However it should also be sunny with temps in the 40s and 50s pretty much across the board today and Sunday so President’s Day Weekend is looking pretty sweet.

Let’s get to some NOTABLES and get you guys out on the hill. The snow is great; there’s plenty of it; and you should be here:

Weather.com is showing Wintergreen Resort at 50°. It isn’t. It’s 35° thank you very much.

Sapphire hasn’t updated a report anywhere in five days. HOWEVER, they are playing in the bathroom today. They posted:

FIFTH ANNUAL OUTHOUSE RACES !!!
Toward the end of each ski season we all get a little restless and look for a bit of excitement, so we decided to do what comes naturally…race outhouses on ski’s down a hill! Crazy? Maybe. Dangerous? Perhaps. Fun? Without a doubt! For a good cause? Definitely! This is an event to raise funds to sponsor ski scholarships for children that don’t have the opportunity to attend our after school ski programs. If you are interested in racing, building or sponsoring an outhouse please call 828.743.1163 for details. This years race will be held on February 19, 2011.

Sugar is doing NASTAR at noon on Big Red both Saturday & Sunday.

Boss Hawg will be playing Blue Grass music in the Lodge from 4-6pm today.

The Homestead hasn’t updated a report in a week…

We received reports of ice skating at two ski areas this last week. One of these ski areas don’t have a rink! Hopefully we won’t hear that from this weekend.

Not sure when they started it but Wisp is doing snowmobile tours after 9pm.

Go enjoy your day and check the snow report page for all the details.

Drop me an email with your favorite photos, videos, and any comments to [email protected] . Also be sure to visit: