Still Looking Ahead to the Weekend 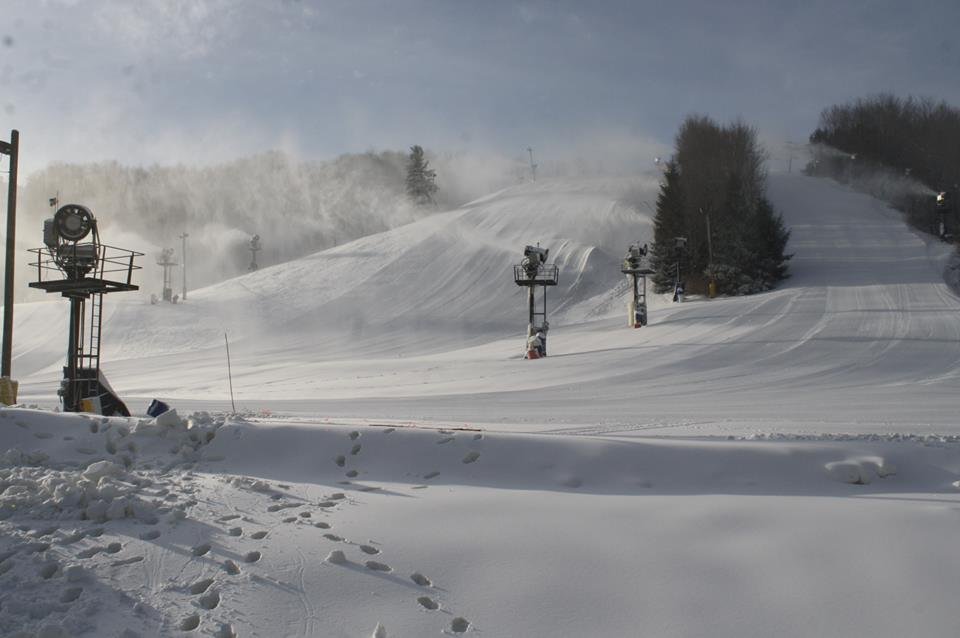 MLK weekend continues to creep up on us, as do the milder temperatures.  Just about every single ski area was above freezing this morning.  The only holdout was Wisp Resort all the way up in Maryland as they were at 26 on the mercury.   Sometimes it’s hard to generalize weather conditions in the region and this morning is a prime example.  While it was 26 up in the northern section of our coverage area, it was a balmy 51 down at Ober Gatlinburg in Tennessee.  That’s quite a temperature spread!

I admit that I quite enjoyed the milder temps yesterday.  Down here in Charlotte it got into the 60’s and I was able to go for an afternoon run outside for the first time in a while.  One day is enough though and I think I’m ready for the return of colder weather already.  Unfortunately, it looks like I’m going to have to wait a few days for that to happen.  The rest of the work week will continue to see much warmer temps than in recent weeks.  I even saw a 60 number for a forecasted high temp at two of the ski areas in the region.  Yikes.

Add to that the fact that underdeveloped snow moves in tomorrow and Friday and we have a crummy lead in to the holiday weekend.  As I’ve mentioned the past two days though, the return of Arctic air happens just in time for the vacationers this weekend.  In fact, since yesterday it now appears as if the system has sped up a bit and will move in late Friday instead of early Saturday.  It’s going to be quite a 24 hours for those MLK guests who arrive on Friday for their weekend trip.  They’ll be welcomed with relatively mild, rainy conditions.  When they wake up the next morning it’ll be 15-30 degrees colder and snow will be falling at many of the resorts.  They’re going to get a firsthand experience in the craziness that is mountain weather.

Once we get past Friday the entire weekend still looks great.  Sub freezing high temperatures on Saturday (for many resorts), Sunday, and Monday will keep the snow in great condition.  Normally I would say we’d see around the clock snowmaking but we’ve had plenty of that in the past month.  I’m interested to see how many resorts keep the snow guns on during the daytime.  I suspect most will keep them off to provide an optimal experience for their guests.  We all know the social media backlash that can happen!

A Look at Trail Counts

With it being close to the midpoint of the season and with MLK weekend coming up, I figured I’d do a summary of where we are right now in terms of open trails.  I did this last Wednesday and things have improved even more since then.  To speed things up a bit I’m going to go state by state.

The Tarheel State has 76 of 85 open trails right now (89.4%).  Appalachian Ski Mountain and Cataloochee are both at 100% open right now.  Cat has been that way for a while now actually and I talked on Monday about how good App is right now.  Wolf Ridge and Sugar aren’t far behind as they are only missing a total of 4 trails combined between them.  Wolf Ridge is having their best season in a long while. Beech is only reporting 12 open trails today but they had White Lightning open this weekend.  I’m not sure what’s up with that but it would put them at 14 if that gets back open.  Sapphire is closed today as they always are during the week, but they’ll open back up for the weekend so I counted their 2 trails as open.

The ski areas in the state for lovers are having an excellent year after a mediocre at best 2016/2017 season.  They have 47 of 55 (85.4%) trails open right now.  I’m not sure they reached that number at all last year.  The natural snow has been scarce up there this season, but consistent cold has allowed a ton of snowmaking.  Bryce is 100% open, Massanutten is close as they are only missing the CMB Terrain Park, Wintergreen leads the way with 18 open trails, and The Omni Homestead, while closed for maintenance today, had 8 slopes open yesterday.

The ski areas in wild and wonderful WV are having a banner year.  Natural snowfall is below normal but man oh man the snowmaking has been a plenty.  The resorts have 161 of 175 (92%) of their trails open right now.  Snowshoe recently had all 60 trails open and have 59 open today.  Apparently it’s the quickest they were able to get to that mark in over 10 years!  Winterplace is boasting a 100% open trail count right now as well as you can see from the featured image of this post.  Timberline has had some issues in recent years but they have 27 open runs today which is one of the higher numbers I’ve seen out there in recent seasons.  Canaan Valley has been having an excellent season and yesterday they too got to 100% open.

Wisp Resort kind of started slowly this year but they’ve ramped things up in recent weeks.  They have 32 of 34 (94.1%) trails open today and it looks awesome up there right now!

I feel like it’s been at least a few years since I could say this, but Ober Gatlinburg is 100% open with all 10 trails open for business.  The ski area is generally one of the warmer and less snowier parts of the region, so you know it’s been frigid when they have conditions like they do right now!

Do the math and we’re at 326 of 359 open trails in the Southeast right now.  That comes out to 90.8%.  Awesome!  Obviously there’s plenty of terrain to be ridden right now in the region.  Take your pick and get out there ASAP.  Well, maybe hold off on Thursday and Friday and wait for the weekend…