Spring Fever Was in Effect This Weekend 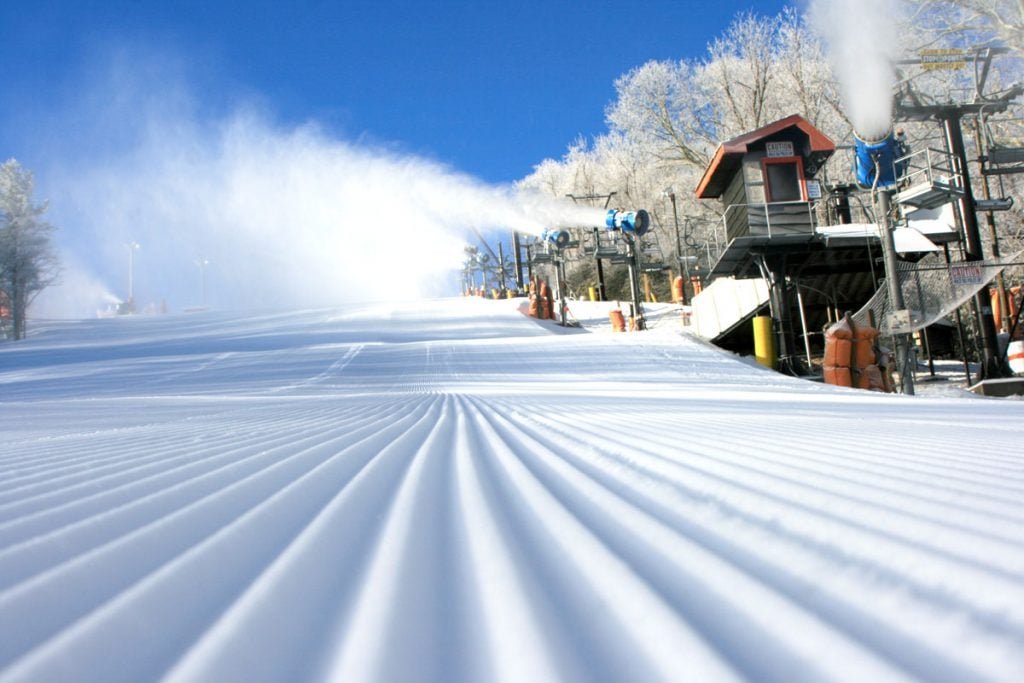 What a fantastic weekend!  Blue skies and warmer temps had many people feeling spring fever, myself included.  I busted out shorts and sandals for the first time yesterday.  It had to be done.  Everywhere I looked on the webcams I think I saw nothing but blue skies.  It was great.

I also made it out to Appalachian Ski Mountain on Saturday and was pleasantly surprised.  They had made snow the prior two nights and it showed as conditions were fan-freaking-tastic.  Nice and crunchy in the morning before temperatures warmed up.  Kudos to them for continuing to make snow into March.  The photo at the very top of this post was taken from out there on Saturday morning.

I posted a trip report on the messageboard.  You can read it by CLICKING HERE.  There’s several pictures I got from the afternoon.  The morning was just too much fun and I didn’t want to stop to get my camera out.  Here’s my favorite picture from the day.  It’s also the Photo of the Day on the front page.  My buddy is pretty good.

A Rough Week Ahead

Hopefully you were able to get out this past weekend and enjoy the beautiful weather, because the week ahead looks less than ideal.  Temperatures this week will be mild-ish and not crazy warm, but there is a good amount of underdeveloped snow in the forecast after today and through Saturday.  We are into March now so this is expected but that doesn’t stop it from hurting any less.

Base depths and snow conditions are pretty stellar still, but several days of weather like we’re about to see will undoubtedly put a dent in the snow.  Don’t get too bummed though as there is always hope.  Two years ago in late March I experienced the best turns I’ve ever had in North Carolina.  It dumped for two days and I had a couple of powder night sessions at Sugar.  This was on the 25th and 26th of March.  It’s only March 9th, so there’s still a few weeks left where we could see some more snow.

Now that we’re a week plus into March, it’s time to talk closing dates and abbreviated schedules.  Just about every ski area has posted their plans for the month now and I figured I’d share all of them with you so you can plan your late season trip accordingly.  This is depressing to type all of this.

Appalachian Ski Mountain: They will continue their daily operations, which includes both day and night sessions, through Sunday March 29th.  That weekend will see their annual Meltdown Games event take place which includes pond skimming and some other festivities.  ASM will then re-open for one final weekend on April 4th & 5th where ticket sales will go to the Middle Fork Greenway.  Read more about it HERE.

Beech Mountain Resort: Beech hasn’t announced anything offcially yet, but I’m hearing they are closing on March 22nd and that this is the last week for night sessions.

Sapphire Valley: They are the first resort in the region to close for the 2014/2015 season as they called it quits this past weekend.  They had a slow start to the season and weren’t able to open until late December, but after that they were able to recover and have a stellar year.  Messageboard member ToroAzul posted a trip report from this weekend out there.

Sugar Mountain: As is always the case, Sugar hasn’t announced a closing date yet.  Heck, they usually wait until a day or two before to even announce it.  My guess is they’ll probably try to make it til the last weekend in March considering they have plenty of snow out there.  They’re still 100% open with day and night sessions.  March Madness rates are in effect as well.

Wolf Ridge: Wolf announced on their site this morning that they are closed Monday-Friday of this week and will open for one final day on Saturday.

Bryce Resort: They haven’t officially announced a closing date but I have a feeling this weekend will be it.  Their Winterfest 2015 event is happening this weekend and it includes pond skimming.  Pond skimming at any ski resort usually signals the end of the season.  I could be wrong though.

Massanutten Resort: They announced on their site yesterday that they will be skiing and snowboarding through March 22nd.  Here’s their end of season schedule.  Operating hours will Sunday – Thursday will be 9am – 5pm, so no night sessions during the week.  Friday and Saturday will see lift access from 9am – 9pm.  They’re still 100% open.

The Homestead: No announcement.

Canaan Valley: Their current tentative closing date is March 29th.  Obviously this could change based on weather, but they do still have 43 of 44 trails open so the outlook is good.  Value season rates are currently in effect with a full day lift ticket only being $35.  View all the late season rates HERE.  Their Wild Thing Weekend event is going down this Saturday.  Festivities include live music, a boarder cross race, pond skimming, and more.  Read all about that event by CLICKING HERE.

Snowshoe Mountain: They are open until April 5th.  I’m not sure about operating hours later this month, but we’ll let you know when we find out.

Timberline: No announcement yet, but they do have the Local’s Cup event on March 22nd.  Combined with the fact that they have almost the entire mountain still open, I think it’s safe to assume that Timberline has at least a few more weekends left.

Winterplace: Look for Winterplace to close up shop on March 22nd.  Here are the late season hours from their website.

Wisp Resort: No announcement, but their website only has hours of operation listed until March 15th, so this weekend could be it for them.

Wow, that was a lot to sort through and type.  I hate having to write about closing dates and what not, but as I said I just wanted to give you all a heads up if you’re planning a late season trip.  If anything changes, we’ll let you know.