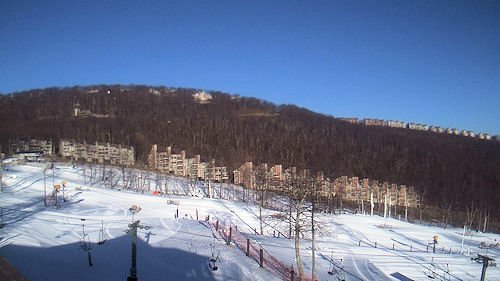 (Photo is from one of Wintergreen’s WebCams showing a great look at the mountain this morning!)

It was cold enough that snowmaking happened across most of the ski resorts late last night. Those efforts held base depths in good shape and actually allowed Snowshoe and Winterplace resorts to open one additional slope (each). That takes us to 110 slopes and trails open within our Southeast and mid-Atlantic coverage area.

This morning (as of 8am) we’re seeing 38° at Beech Mountain, 41° at Appalachian, 45.7° at Cataloochee and there’s definitely a temperature inversion going on because it’s 25° here at my home in Sleepy Hollow. Compare that with the summit temperature at the TOP of Cataloochee where it’s nearly 2° warmer than at their base (47.3°).

Sugar Mountain’s base temp is 36.2° compared to 40.2° up top – so yet another temperature inversion.

We’re showing the “Snowmaking” column of the snow report as OFF at ALL of the ski areas only because they are not currently making snow which is awesome if you’re thinking of heading to the slopes today. Sunny skies and no snowmaking is always a blast. A lot of the resorts WERE able to make snow overnight and that will insure nice coverage for today.

Wolf is Howling…or Starting to…

I communicated with long time Wolf Ridge partner, Rick Bussey on Saturday as Wolf Ridge opened for the season. Everyone who follows Wolf (or this website) knows that they’ve had a bit of a soap opera going on over there.

Between less than stellar weather patterns a couple of years ago, two less than stellar potential buyers who have come and gone, AND a fire that destroyed the upper lodge and affected their abilities to serve a couple of slopes – Wolf has been whimpering just a bit and in need of a good vet.

(Okay, I suppose that’s enough portraying the ski area as its moniker.)

The good news is that Rick Bussey, Orville English and their team are all fighting to get back on their feet.

Bussey wrote, “…We are looking forward to a great ski season. We’re also hope to rebuild a new facility next year (replacing the one destroyed by fire) and this Lodge will most likely have some hotel units in it with more convention meeting space, restaurant, gift shop and rental building.”

He also added, “We will not have the Ridge Runner and Breakaway slopes adjacent to the upper lodge open this year but are advertising 15 great ski runs from the bottom Lodge. We will still have our infamous Black Diamond “The Bowl” run, View Finder, Powder Hill, Upper and Lower Streak and all the other old favorites open to our customers.”

That IS GREAT NEWS to all fans of Wolf and we’re REALLY pulling for them to have an awesome season to generate the funds that they need to inject back into that ailing animal. (I HAD to go there one more time!)

Kudos to Orville, Rick, Charles Stancill and all of their longtime staffers. Most of the smaller ski areas in the United States are all like small families where you’ll see the corp group of management and support staff that will be there year after year and do everything possible to make it all work. We’re pulling for Wolf Ridge…and know that their residents and local businesses in the community are as well.

One more note – we’re hopeful of being able to get their Wolf HD webcam back running soon.

Snowshoe Mountain had a bit of freezing drizzle up there on Saturday and they are fighting a little more of it this morning – however they’re winning the battle because they’ve opened even MORE terrain today.

Upper Ballhooter is open!! Bringing the total new trails this week to 8! They now have 22 of 60 trails open. Snowshoe does an awesome job of grooming so expect some sweet slopes on Sunday.

Winterplace Resort ALSO opened another trail today to get them to 15 of 27 slopes operating. Tubing and all of the mountain will be open for day sessions Sunday.

Joe Stevens waxes reminiscent with his Snow News is Good News column today. Be sure to check that out.

Previous Post
109 Trails Are Open at Southeast and mid-Atlantic Ski Resorts today!
Next Post
SEEING THE WHITE STUFF FOR THE FIRST TIME