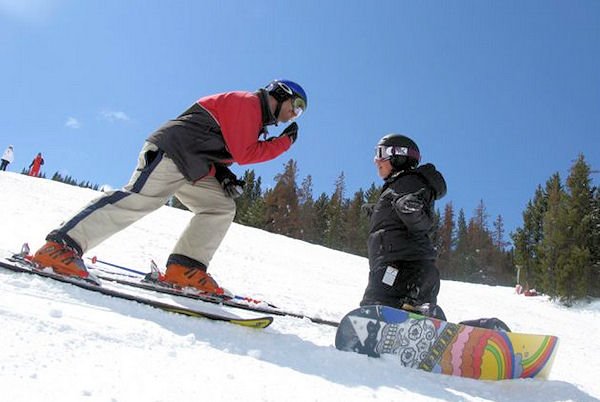 By virtue of working in the ski industry for over 30-years I have been able to see the addition of snowboarding into the great sport from basically the ground up. When I started skiing with my first turns on the slopes of Massanutten Ski Resort in Virginia, I can’t remember seeing any snowboarders on the slopes, despite the fact that it came after Jake Burton Carpenter perfected the equipment in 1977, but I was told they were there. Honestly, I was more worried about staying upright myself.

It has been widely reported through the years by hundreds if not thousands of reporters that the mixing of skiers and snowboarders was, and stop me if you haven’t heard this before, like mixing oil and vinegar. The response from skiers from day one to snowboarders invading their space on the slopes, was like when Bob Dylan switched from acoustic to electric guitar (if you are old enough to remember that, which I am), there were many music lovers who would’ve rather Dylan had just stopped performing.

As most of us old-timers know that didn’t happen and Dylan continued on with his Hall of Fame musical career and low and behold, even performed with his acoustic guitar again, allowing everyone to be happy and understand that normal is basically what you want normal to be and maybe that means going back and forth with change.

Now back to the battle of skier versus snowboarder. I saw it get hot and heavy in the early and mid-90’s as a number of resort operators resisted even allowing snowboarders on their slopes. That was happening even though every snowboarder was paying the same thing for a lift ticket that a skier was paying. Go figure, huh. But little by little the majority of the ski resorts across the country, understanding that snowboarding wasn’t going to go away, and the bottom line was well the bottom line, allowed the one plankers their spot on the slopes.

This just made some skiers fume even more, with some even going to the various management teams, asking and even demanding to have their own trails, with snowboarders not allowed on the terrain. This actually occurred at some resorts for a very short time, but as time went by, it was determined that snowboarding wasn’t going to go away and they were allowed to enjoy the same amount of acreage as skiers.

Okay, 450 words into this week’s column and I am about to get to the point of this week’s message and that being, after I thought the skier versus snowboarder battle had gone by the way side, the ugly dragon has resurfaced. Time for full disclosure here, in 1997 I made my first turns on the snowboard and haven’t looked back. Seriously I haven’t been on skis since that December day on the Skidder slope at Snowshoe Mountain. I really don’t know why I haven’t skied, I just haven’t, that’s all I have to say about that (thanks Forrest).

As you learned by reading last week’s column, I returned to the slopes after a two plus year layoff from snowboarding late last month at Winterplace Ski Resort. While I really didn’t see or hear any evidence that the battle between the one and two plankers during my time on the slopes, I did notice that one thing hadn’t changed, the number of skiers compared to snowboarders still is about a 70 to 30 percent ratio. Meaning, if you are keeping score at home, for every seven skiers out there on the slopes, there were about three snowboarders. That is basically where the ratio has been since the turn of the century.

There was a time when I heard skiers say they were worried that snowboarding was going to take over the sport they loved. Well we all know that didn’t and isn’t going to happen. What did happen was that the equipment skiers were using all of a sudden got shorter and a bit wider. I truly don’t believe that happened by accident, because more and more skiers came to realize that shorter and wider was easier to control and could be just as much fun as those skinny long boards could be.

As I wasn’t searching for a topic for this week’s column earlier in the week, I was given a suggestion by Shawn Cassell, the Public Relations Specialist for Snowshoe Mountain. While talking to him about the annual Cupp Run Challenge that took place earlier in the week, he told me about a skier who complained about having the young snowboarders and skiers, compete first in the race, as the weather wasn’t the best in the world and the event organizers were concerned about the young athletes being out in not so good conditions.

As Shawn tells it, all of the competitors were made aware of the change in the running order of the downhill event and everyone, well almost everyone as it turns out was okay with the change. The race went off and one of the premier ski races in the region was concluded without much of a hitch, other than the skiers and snowboarders having to deal with Mother Nature’s curveball.

Well later after the race, one, count them, one skier complained that the young snowboarders (not the skiers) messed up the course and it made him have problems on their run. And so the battle continues, skier versus snowboarder continues after all these years. Shawn, truth be told, also a snowboarder, suggested that I use the subject for an upcoming column. So there you have it, this week’s thought process from an old fan of this great winter sport.

I am glad the complaint wasn’t given to me by the skier, because I probably would have just shaken my head and thought (hopefully not said), “Just grow up.” That argument is just old and tired. You see at the end of the day, skiers and snowboard alike push snow and create grooves when traveling on the white stuff. But as some music lovers have never forgiven Dylan, some skiers are always going to have a negative outlook on snowboarding, the aspect of the sport that created a resurgence in a sport that needed the uplift when Mr. Burton saw a need for something new. I guess some things will just never change, will they?