So How’s the Snow Up here? 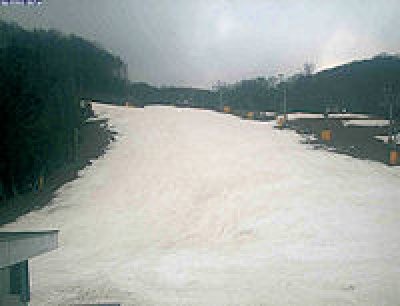 The answer to that question is dependent upon who you ask. If you ask the ski areas that aren't open yet – or who haven't even made snow yet, then the answer would be pretty obvious.

Other ski areas will tell you that they're hanging in there. Snowshoe will brag as they should that things look pretty darn good as yesterday's featured video will attest – Snowshoe Mountain Video

Meteorologist Brad Panovich of NBC News Channel 36 in Charlotte, NC provided us with his first Ski & Snowboard Forecast of the season and if you listen to the first portion of his clip, you'll envision a scene from the Wizard of Oz where the wicked witch can be heard "I'm melting, I'm m-e-lt-i-n-g!

Only Cataloochee, Sugar Mountain and Snowshoe are open and that is the "not-so-cold-hard truth". 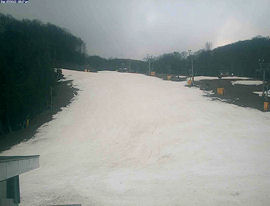 Cataloochee this morning – look pretty nice if you ask me!

Things actually look pretty decent at Cat and if you've got the Joneses for some snow and North Carolina is in your radar…then Cat would be the first choice. If you're close enough to decide between the three ski areas that are open and you want the most open terrain AND the best conditions, then there's no real choice there as Snowshoe IS offering the best snow and the most trails open right now with TWENTY-ONE Freakin' trails!

To understand Sugar's conditions right now, all you need to know is that they decided to postpone this weekend's SugarFest until NEXT WEEKEND, December 14-16th. 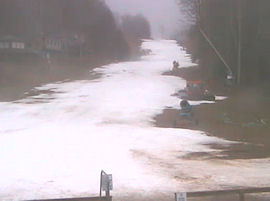 Sugar has 4 trails operating with thin coverage and bare spots. Cataloochee is operating with five trails with some bare spots and as mentioned before Snowshoe is boasting 21 (still freakin') trails and one look at that video mentioned above will attest that there's plenty of snow to be played upon.

He's now sharing his snow-loving weather, insight with us 2-3 days a week. Typically he will provide us with weather video on Tuesday nights for a Wednesday release and then again on Thursday late nights for a Friday broadcast.  When there's snow on the way, look for Brad to be right there in the middle of it updating us as it comes in.

Right now Brad's Forecast is on the front page of SkiSoutheast.com as well as HighCountryWeather.com.

He's calling for a few more days of not-so-winter-like conditions before COLD and some snow starts filtering in. Brad says that this wave of cold should make it to the mountains around Wednesday of next week and he's calling that the "opening of the flood gates" of winter as he's expecting things to progressively get better and better in terms of weather, snow and ski and snowboarding conditions.

THAT IS GREAT NEWS…

YOU JUST CAN'T HIDE FROM THOSE CAMS!

I HAVE to share this story with you this morning! I promise that this went down EXACTLY as I am relating it. I typically stop off at the Foscoe Country Store on my way to the office every morning. I've talked about this place numerous times in my BLOGS. It reminds me a the television show "Cheers" with a country twist. Everyone doesn't necessarily know what you do for a living, but MOST of the morning crowd are old-timers who come by for a quick visit every morning to "shoot the breeze" with the OTHER old timers who drop by every morning. There's the construction foremen and workers who stop in and I'd say that most of us are in and out of there in minutes every day – but many are there as "parts of the decor" almost anytime you drop in.

Anyway, the owners are very sweet people and they know several of our office staff as we help to support that place by dining on their delicious, but not so good for you menu.

I've been going by there regularly for years and the owners and some of the crowd know that we own a web design firm and that's about the extent of their knowledge (or caring) about what we do.

THAT SAID, I was in there this morning and "Billy" the owner was behind the register and I just asked him "When do you think it's going to turn cold?"

I already really KNEW the answer but I was just doing the idle chit chat while he was ringing me up. But he answered, "I don't know but we need it to get cold so the ski areas can make snow."

I agreed. I don't think that Billy knows that I write for SkiNC or SkiSoutheast or have anything to do with the resorts. He then added, "You know anymore those webcam things make it where the resorts can't tell people that the snow is great 'cause all of 'em have those cameras and people can see when there's just a little strip of snow."

It wasn't important for me to share that we have or had a little something to do with all these cameras, but I have to admit that it is always cool to hear from people who know about the cams.

Meteorologist Herb Stevens and I spoke on Thursday and he's provided HIS take on how things look and will look for the West Virginia Ski Areas for the upcoming weekend and for the 10 days working up towards the Holidays.

You can check http://www.highcountryweather.com/weather-snowshoe.php and CLICK ON the "Skier's Forecast" tab to see that audio input.

The summary of that forecast is that this weekend looks a little wet with some rain changing to snow late this weekend and then the cold that is being forecasted as ON THE WAY will hit around Tuesday/Wednesday allowing for what Herb is referring to as "Several days of snowmaking" and even some snows mixed in.

He calls the ten days or so leading up to the Holidays "Cold and Snowy" so all I can say is BRING IT ON.

WHERE ARE THOSE DARN SNOWSHOE CAMS?

Man THAT is the email of this week! I have received COUNTLESS emails from you guys because we made the mistake of thinking that Snowshoe wanted them up LAST WEEK. Kenny hustled up there to install them, and from what we know THEY SHOULD BE RUNNING. We're getting antsy cause we want to see them running as much as you guys do, but we're not getting any support from Snowshoe's IT team as yet.

From what we can tell, to take them LIVE should be a two second switch on.

THAT'S IT FOR NOW. Let's weather the weather today and this weekend and we'll have plenty of COLD and even some SNOW to talk about later into mid, next week.

If you're reading this, do me a favor if you would. If you're on Facebook or Twitter – would you do us a favor and share our Facebook and Twitter content pages with your snow loving friends. We're giving away some sweet contests this season along with the 25 days of Christmas giveaway where we will be giving away lift passes every day of the month through Christmas Day. We'll have some vacations to give away as well so to get the BEST chances to win, follow us on Twitter at www.Twitter.com/Skisoutheast

If you'll tweet your friends to follow us we can build up a great following to join us for our Summits this season. We'll be announcing those dates and locations soon as well.


Drop me an email if you like at [email protected]