Snowshoe is About to Have its Snowiest Season Yet

The 2012-2013 ski and snowboard season marked my first time every visiting Snowshoe Mountain. Intense snowstorms made for impressive snow depths that season, for those who don’t remember.

After sliding up the mountain during a snowstorm, we were greeted with more snow than I had ever seen in my life. I had never seen so much white, fluffy powder in one place at one time. It truly was an incredible experience.

This past off-season, Snowshoe made several major steps to assure that, regardless of what precipitation Mother Nature brings, the mountain will be covered in high-quality snow.

A $4M Investment in Snowmaking Technology

If you attended the 2018 Annual Ski Southeast Summit, you may have heard the news: Snowshoe Mountain has invested nearly $4M in upgrades to its snowmaking and grooming technology this past summer.

Resort officials expect the investment to open up a significantly higher number of ski trails by early December. Improved technology will also allow the mountain to maintain a high-quality snow surface throughout the ski season. 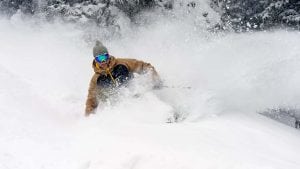 An ever bigger bonus of improved technology? A reduction in the mountain’s carbon footprint.

“This is the single most important investment our new owners, Alterra Mountain Company, could make in Snowshoe,” said Frank DeBerry, Snowshoe’s President and Chief Operating Officer.  “As this past season demonstrates, Snowshoe’s unique microclimate and elevation provide us with the cold and snow we need to provide the best and most skiing and riding in the mid-Atlantic and Southeast.  This investment further boosts and protects our greatest strength, all while taking yet another step towards reducing our impact on the environment.”

Check out this awesome sneak peek the Snowshoe folks uploaded to YouTube once the snowguns arrived. I for one am very excited to see what a difference this technology makes.

Our own Kenny Griffin shared the following facts from the media announcement this past March: 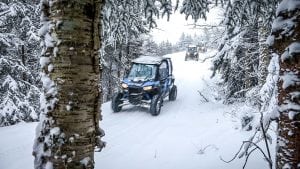 Did you know that Snowshoe Mountain partly has the Great Lakes to thank for its awesome snow?

Much of the East Coast is known for heavy, wet snow. Snowshoe is blessed with light, dry power, similar to West Coast snow. The Mountain sits close enough to the Great Lakes for a consistent upslope lake effect and snow from the many passing Alberta clippers. The mountain remains far enough east, however, to greatly benefit from Nor’easters as well.

The Mountain is situated at the southern end of Cheat Mountain, and its elevation of 4,848 feet produces a unique microclimate that keeps temperatures much cooler than the surrounding areas.

Basically, Snowshoe is throwing as much snow technology behind Mother Nature as they possibly can.