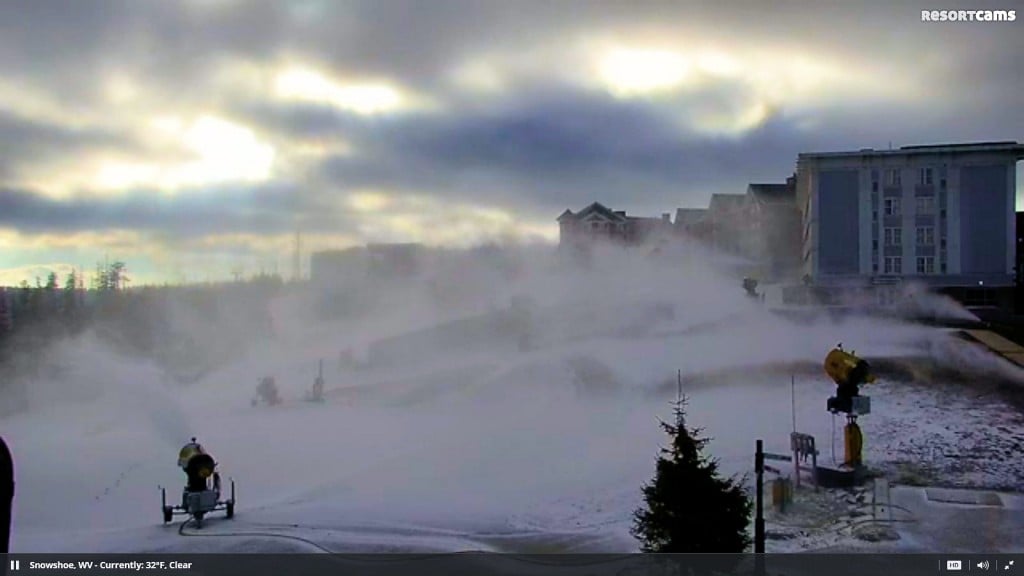 The messageboard started a post on Friday saying, “So it Begins…” with posts about Sugar Mountain making snow. Snowshoe Mountain Resort and Cataloochee Ski Area ALSO made snow on Friday. To be honest, I have not had the opportunity to speak with reps at Cat or Snowshoe about their snowmaking but with the weather forecast for the next ten days showing highs in the mid 50s and lows only in the mid 30s and even 40s – it is hard to understand why those two were making snow.

It is the general consensus opinion that Sugar Mountain Resort was making snow in an attempt to actually open TODAY since they have ribbon ceremony planned to open their new Summit Express lift. Lots of people were already planning to be there, including Governor McCrory of North Carolina…so it kind of made sense that if Sugar could make enough to snow to open – if EVEN for 1-2 days – it would make for great photo ops and some good marketing rep.

Sugar Mountain from this morning at 8:40am. 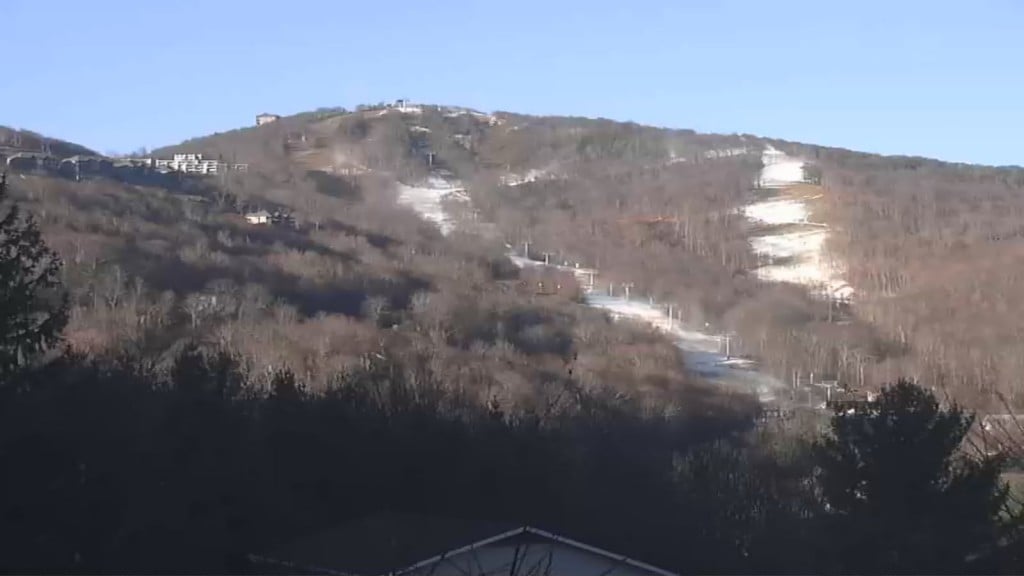 Sugar made a ton of snow since starting on Friday and they EVEN made snow on Gunther’s Way. That also surprises us in the same way that Snowshoe and Cataloochee’s snowmaking is. If the snow is only going to be on the slopes for a couple of days, then why do it – unless you’re going to open.

Obviously there is SOME component of excitement when ski areas start snowmaking ops, but with the forecast for another two weeks of mild temps and NO snow or snowmaking opportunities, you kind of wonder, “why do it?”

In Sugar’s case, the Grand Opening of their new Summit Express lift kind of trumps everything. If they could open, then fantastic. If not, they still have a bunch of snow in all of the photos and videos that will be flooding social media around mid-day.

By the way – IF Sugar is opening today, they are not showing their hand as of 8:45am. Their website makes no mention of it and I just called their snow report line and there is no mention of it there as well. Understandably, Vice President and Director of Marketing, Kim Jochl has her hands full this morning so she was not available for comment – but the couple of people that I spoke with on the mountain this morning either don’t know anything or they aren’t saying. Their comments collectively were, “I just work here. I don’t know, but I can put you to Kim.”

Upon doing that, it went to voicemail. Again – understandable. But the point is Sugar IS MAKING A TON OF SNOW and I think that they MAY just announce that they are opening just minutes prior to cutting that ribbon. 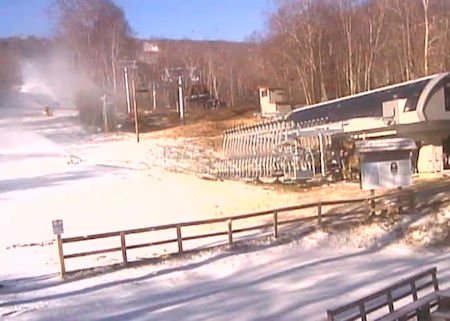 Some of our readers have commented about the fact that a bunch of the 6-pack chairs are lined up at the base station.

They are there, but as we watched the live cam, there were also guys pushing some snow around down at the lift like they were trying to get an entry point setup.

So it IS “speculation central” as of 9am. We’re about an hour away from their Grand Opening Celebration and our Randy Johnson will be on hand and we’ll try to get some good photos and comments when and if.

Certainly Sugar’s snowmaking ops with very limited conditions yesterday and one good night of snowmaking will say a lot about snowmaking ops these days – if they can get open. However, I’ve also provided two photos below that shows the difference that resorts can make in less than 24 hours. 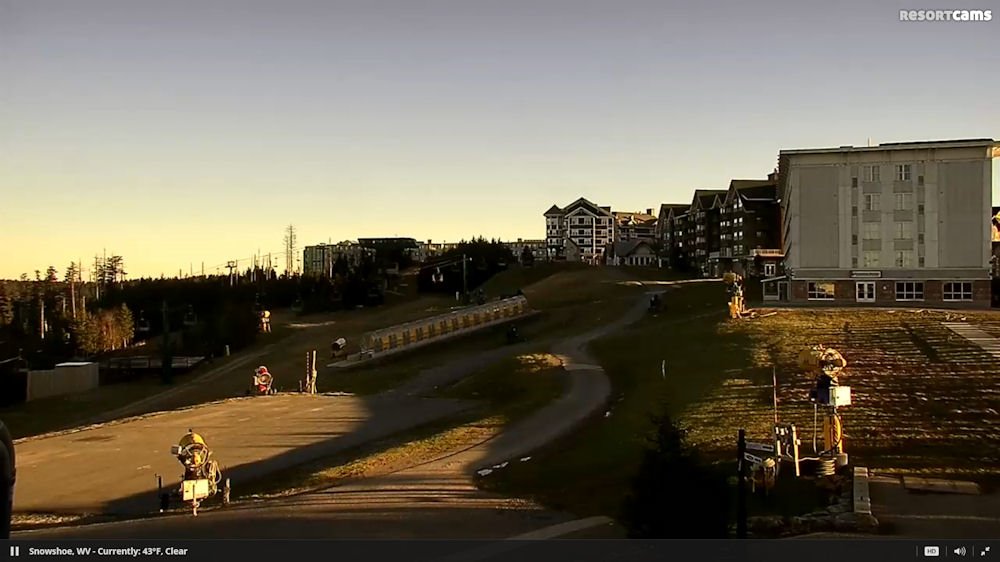 Then this next one is just 16 hours later – this morning at 9am.

I’m scrabbling this morning with lots of family things to do today, but we’ll update the site with photos, videos and some interviews as we get them from Sugar today.

Kenny Griffin posted the photo below that was taken by Kyle Snowden from over at Cataloochee as they blanket the slopes. 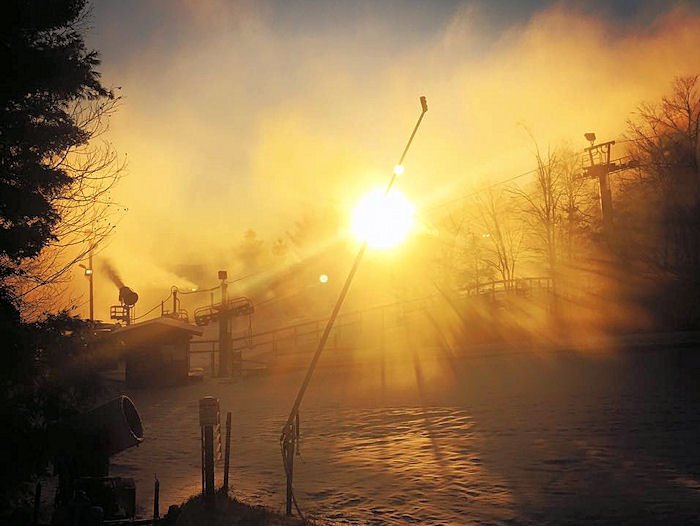 In the meantime…enjoy all the fuss about the weather…even if it IS for 1-2 days – for now!